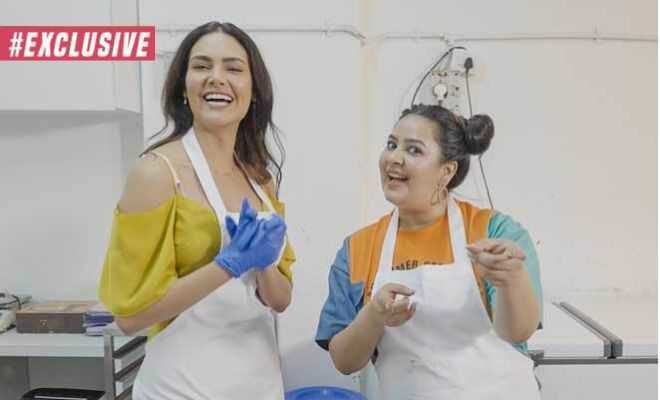 In A Very Chocolatey Episode Of ‘Yeh Ladki Pagal Hai’, Esha Gupta Talks About Her Foodie Side And More!

The very beautiful Esha Gupta who made her debut with Jannat 2 in 2012, gave us quite a memorable performance with that one. She even won the Filmfare for best female debut for the movie. The actor has also given impactful performances in movies like Baadshaho, Rustom, and Raaz 3D. Esha Gupta was recently seen in Asharam season 3. While we are sure her skills definitely speak for themselves, we bring to you some not-so-known facts about the actor, you will love Esha more for this. In the latest episode of Hauterrfly’s Yeh Lakdi Pagal Hai, Esha Gupta gets candid with the Confused Kudi and we get to see a very different side of Esha. The actor opens up about her foodie nature too!

In the latest episode with Esha Gupta, the actor had a hearty conversation with the Confused Kudi while also making some delectable chocolates. During this interview with us, Esha expresses her absolute love for chocolates and tells that she is really fond of good food. While introducing us to some roasted cacao beans, Esha Gupta said that a  chocolate factory has been her childhood dream, especially after watching the movie Charlie and the Chocolate Factory. Esha also teaches the Confused Kudi some steps involved in the process of making chocolates. On being asked how she manages to stay healthy and fit even after eating chocolates, Esha gave a very helpful tip. She said that a balance in the diet is very important. Elaborating on the same, she harped that workouts are also equally important. The actor also shared a fun anecdote with us. She talked about the time during her Miss India days when she was asked about the one wish she wanted to have been fulfilled. To this Esha had answered that she would like to eat any food like “cheese” or “chocolate”  without gaining weight. Accepting that she is a foodie, Esha also said that if this wish of hers is ever granted, she can actually “live off chole bhature, pav bhaji and aloo chat” her whole life.

Also Read: ‘Yeh Ladki Pagal Hai’: Mrunal Thakur Told Us Why She Isn’t Married And It Has A Ranbir Kapoor Connection

Esha’s passion for food is quite strong. The actor also revealed that she is a brand partner and has a “part of ownership” in a restaurant named Tatel. Esha feeling proud of being a businesswoman also says that nobody in her family has ever dealt in business. Talking about equality, Esha also talks about the standard mindset of people where they want a girl to marry a rich settled man and further questions the same by saying why can’t girls become that? The actor also believes that the change is happening and credits the media for providing the female actors with a platform to openly speak about everything.

Check out the whole video here-

Sonam Kapoor Opens Up About Her Pregnancy Journey, Says “Nobody Tells You How Difficult It Is”