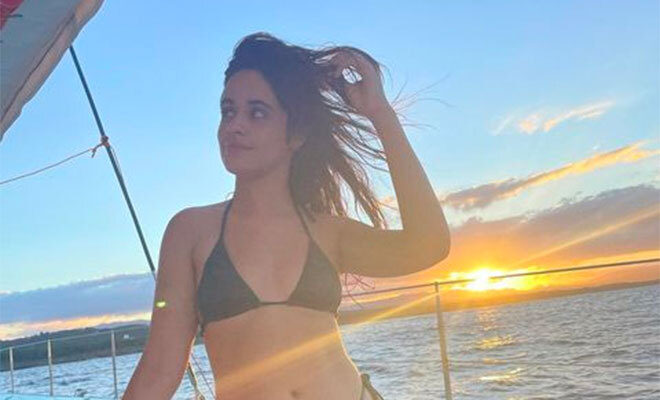 We are not quite sure about others but the ‘Havana’ singer Camila Cabello is simply enjoying ‘living life’ these days. Rumours have it that ex-couple Shawn Mendes and Camila Cabello reunited again after their emotional breakup nearly two months ago. And in the middle of the reunion, Camila blessed us with a few pictures from her vacation to the Dominican Republic. Hmm, Camila is really having a good time, right now!

Camila Cabello is in total vacay mode these days, she posted some pictures from her vacation to the Dominican Republic on her social media and we don’t know about Cinderella but she is giving us the Little Mermaid vibes. In the pictures, she can be seen wearing a black bikini. As the sun sets behind her, the ‘Don’t Go Yet’ singer poses cutely for the pictures on a boat that is in the middle of an ocean. Taking to her Instagram handle on Monday night, the 24-year-old singer shared a series of sultry bikini photos from her trip to the Dominican Republic. Sharing the pictures on Monday night, the 24-year-old singer wrote, “I posted no pics because i was hashtag living life, but I was in the REPUBLICA DOMINICANA BABYYYYYY.”

Take a look at the picture here:

On New Year’s Eve, Camila Cabello shared a similar sunset photo of herself and talked about her new upcoming album named ‘Familia’ which will release in 2022. “Feliz ano nuevo! Can’t wait to give you guys my/ our next album, Familia in 2022,” Camila wrote in the caption.

Recently, Camila Cabello and Shawn Mendes were seen hanging out with each other only two months after the breakup. In early January, they were seen walking their dog who is an adorable golden retriever named Tarzan at the Matheson Hammock Park in Miami, according to the reports.

Also Read: Shawn Mendes and Camila Cabello Have Broken Up After 2 Years Of Dating And I Am Heartbroken!

The news made their fans really excited about the fact that the ex-couple is finally getting back to normal and spending some time together as friends.