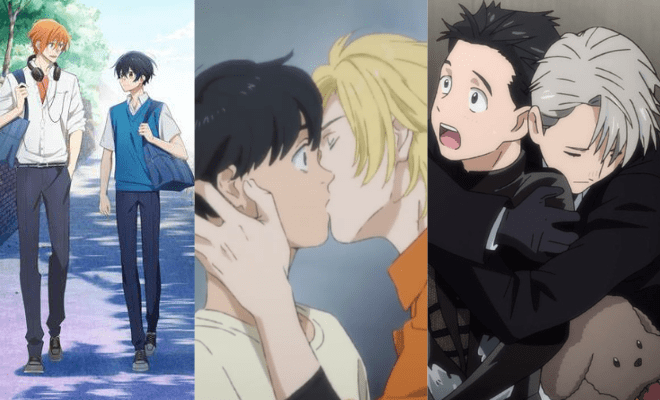 Remember Haku from Naruto? I still remember how lost I was when I first found out that he is not supposed to be a woman (excuse my ignorance about gender, I was a child). His androgynous appearance was what threw most of us off at the time. However, it was later specified that Haku was indeed supposed to be a young boy. One of the many things that excite me about watching anime is the LGBTQ+ themes found in many of them. Be it canon, romantic relationships or unspecified ones, the allusions to the queer community are plentiful in the genre and I am here for it. I live for all the canonically queer or queer-coded characters in some of these stories and I believe that anime is a good place to start for those of us who are looking for good LGBTQ+ representation. So here are a 12 LGBTQ+ animes which you must watch this Pride Month:

The lives of a transgender boy (Yoshino Takatsuk) and a transgender girl are depicted (Shuuichi Nitori) in Wandering Son. This anime follows the two high schoolers growing up and revolves around their difficulties and hardships as they struggle to come to terms with their gender dysphoria. These two friends share a common secret and find comfort in one another; yet, their lives get much more convoluted when they must navigate the unknown waters of a new school, establish new friends, and battle to keep old ones. They must learn to deal with the hard realities of having to grow up, transexuality, relationships, and acceptance despite virtually insurmountable difficulties.

Antique Bakery revolves around the lives of Keisuke Tachibana, a pastry maker who despises cake after a horrific childhood incident, and Yusuke Ono, a famous chef who is perpetually out of work owing to his irresistibility to men, causing his coworkers to fight over him. Ono has come far since that awful day in high school when he professed his feelings for the gorgeous Tachibana.   No man can resist Ono’s charms or his cooking abilities! but he has recently found a new job working for Tachibana! Is he the only man who can resist Ono’s charms?

Yuri!!! On ICE is one of the most well-known anime series in recent years. The plot follows Yuri, a figure skater who is on the point of leaving the sport. Yuuri goes viral after a video of him recreating a dance previously performed by five-time world champion Victor Nikiforov goes viral. In fact, Victor comes to Japan to be his coach and shows up at Yuuri’s house unexpectedly, proposing to be his mentor. Yuuri accepts excitedly as one of his biggest admirers, embarking on his adventure to return to the world stage. But the rivalry is tough, as Russia’s rising prodigy, Yuri Plisetsky, is hellbent on defeating Yuuri and regaining Victor’s tutelage. Yuuri and Victor soon become very close and begin a romantic relationship. While the show is unnecessarily ambiguous it is nonetheless a must-watch for LGBTQ+ anime enthusiasts.

Citrus follows Yuzu Aihara, a young woman after her mother remarries and she is relocated to an all-girls school. Yuzu despises this school and is continuously chastised by Mei, the Student Council President, who also happens to be her step-sister. The two females soon become close, forming a deeper passionate relationship and exploring their individual sexualities. While this anime is definitely problematic, it is a story which has been recommended to me several times and seems to be loved within the weeb community. However, if the theme of stepcest bothers you, you are free to give this one a skip.

Gravitation is one of the first LGBTQ+ anime series. It depicts singer All Shuichi strolling in the park late one night with his written song lyrics landing at the feet of a beautiful stranger. Unfortunately, that mysterious man turns out to be famed novelist Eiri Yuki, who thoroughly humiliates the young singer by declaring him he has “zero talent.” Shuichi is so furious that he finished his song solely to find and confront Yuki again. But, is his behaviour truly fueled by rage, or has he fallen in love?

Doukyusei features Hikaru Kusakabe and Rihito Sajou, two boys who meet when Sajou needs assistance training for their school’s chorus festival. Despite their opposing personalities, they begin to build a connection while preparing for the musical performance. Their increasing bond allows them to learn not only about each other but also about themselves as they strive to determine what they want to do after high school. This is a heartfelt coming-of-age romance that is worth your time, I promise!

Also Read: This Pride Month, A New Glossary Is Teaching Us All We Need To Know About LGBTQIA+ And Gender Spectrum

Eiji Okumura represents everything Ash Lynx cannot have. While Eiji lives a peaceful life, Ash has been involved in the criminal underworld since he was a child. Though he desires the tranquil, secure existence that Eiji promises, he is equally unwilling to put Eiji at risk by involving him in his sleazy lifestyle. Meanwhile, Eiji is only concerned with protecting Ash. He loves him because he is the first person who has ever made him feel fully alive, and is not really concerned with what dangers those feelings may bring. This anime is sad and will break your heart into a million pieces but we’re all suckers for pain, aren’t we?

Yoshikazu Miyano expects to be mercilessly humiliated for his love for BL mangas when he his upperclassman Shuumei Sasaki finds out about his secret. Sasaki, it turns out, wants to start reading BL. And cutely enough, not because it’s his thing, but because he likes Miyano.  Sasaki has a major crush on Miyano, and Miyano is starting to feel the same way. Despite his doubts, it turns out that he would like to have a Boy’s Love experience in real life. The anime is adorable and wholesome af!!!

Given approaches high school romance in a unique way. This anime is one that music fans everywhere should watch.  Ritsuka wishes to be a musician, but he has lost interest in playing the guitar. And, as any creative person will tell you, losing your passion for what you do best may make life feel boring and dull. He meets Mafuyu and hears the other boy’s beautiful singing voice. A sequel film delves into the difficult connection of the band’s other two members, Haruki and Akihiko.

10. The Stranger By The Shore (海辺のエトランゼ)

I personally got lured into watching this one because of the beautiful animations and visuals. The story follows novelist Shun Hashimoto who was ostracized from his family after coming out as gay. When he encounters the recently orphaned Mio Chibana on the beach one day and is instantly smitten. The days go by as they get closer until Mio abruptly says that he will be leaving for the mainland. Mio, now 20, returns to Okinawa after 3 years to profess his feelings for Shun. Shun must now confront his past in order to move forward and accept his future.

Requiem of the Rose King, based on William Shakespeare’s plays Henry VI and Richard III, takes place during the real Wars of the Roses, an English civil war from the 1400s. The plot revolves around Richard III, Duke of York, and his attempt to succeed his father as heir to the throne over his older brothers. Richard’s condition is one of the most noticeable changes she made. He is portrayed in the play as a hunchback who is vilified by his family due to his evident deformities. The viewer soon realises in Requiem for the Rose King that Richard’s body is “neither a man’s nor a woman’s.” Richard’s ambiguous anatomy also enables him to have romantic interests who are both men and women. If you are a hardcore literature lover and a weeb, this one will excite you.

Aoi Hana follows Fumi Manjme, a shy young woman who reunites with her childhood friend Akira Okudaira.  Fumi Manjme is a lesbian, and the series does a good job of following and fleshing out this character without falling into stereotype territory. Aoi Hana is a coming-of-age and does a good job of combining all of the typical high school drama in a way that is entertaining to watch, with each character being engaging in their own right.