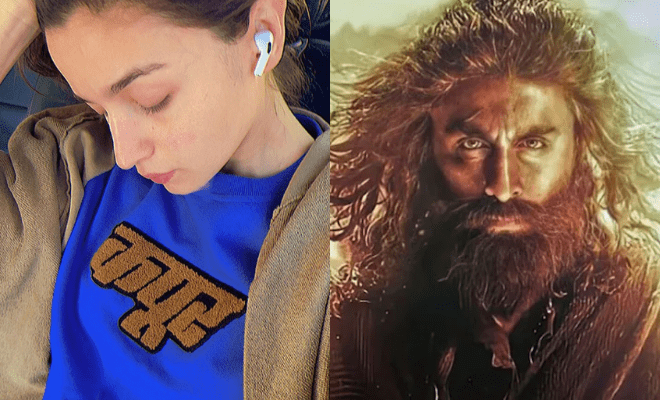 I always believe that one must hype their partner up in their personal and professional achievements. I love it when I see celebrity couples do it for each other. Thie kind of public display of affection and love just melts my heart every time. And when it comes to hyping her partner up, Alia Bhatt has been hyping her husband Ranbir Kapoor like no other! From promoting his upcoming projects to announcing his film’s release, Alia is proving that she is Ranbir’s biggest cheerleader! Well, today was no different either as Ranbir Kapoor’s Shamshera hit theatres and Alia took to her Instagram to share a photo of her wearing a t-shirt that read ‘Kapoor’ and asked fans to go watch the film as well!

Taking to the photo-sharing platform, Alia shared a picture of herself wearing a blue t-shirt that read Kapoor in Hindi across it. She also wore a brown jacket over it. The t-shirt was designed by Dhruv Kapoor. In the picture, she sported a no-make-up look. In the caption of the post, the Gangubai Kathiawadi actress wrote, “It’s Kapoor Day! Shamshera in theatres NOW!!!! Go watch (red heart emoji, explosive emoji).”

She also took to her Instagram stories to repost this picture and also write how excited she is for the audience to watch it. She wrote in the caption, “Shamshera out now. Jaake dekhiye sirf theatres mein! Action!!! Scale!!! High drama!! High emotion!! Full on entertainment!!!” 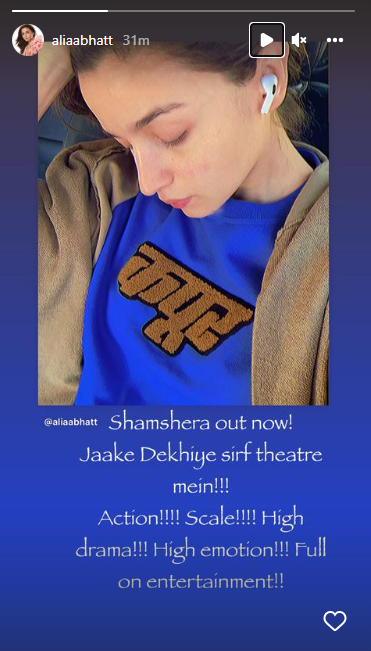 It is heartwarming to see Alia hold no bards when it comes to anything related to Ranbir Kapoor. She has always been the first one to support him in his ventures and also has his back. Where can we find love like this? *sigh*