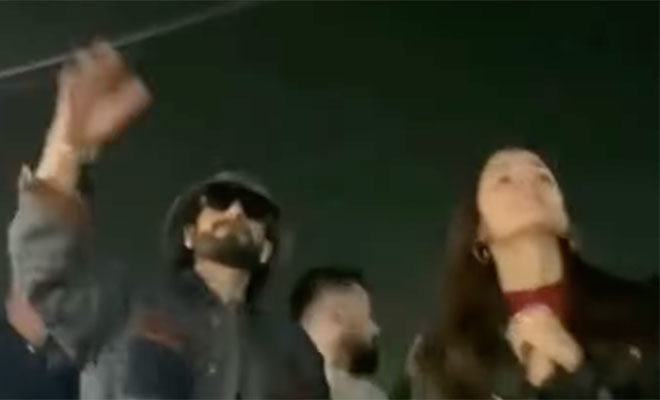 Alia Bhatt and Ranveer Singh are busy filming their next film Rocky Aur Rani Ki Prem Kahani. Recently, they both took a break and attended music sensation Amritpal Singh Dhillon, popularly known as AP Dhillon’s concert in Gurgaon. Alia and Ranveer’s fans were delighted to see them at the concert and soon many videos surfaced online which shows Alia and Ranveer grooving to the music and Alia interacting with her fans which are too cute to resist!

In one of the videos, the Gully Boy actors can be seen dancing to rapper, singer and songwriter AP Dhillon’s songs. The singer’s song Brown Munde was a huge hit. Check the video of Alia and Ranveer grooving at the concert:

Alia Bhatt, who attented the concert with co-star Ranveer Singh and a few crew members can be seen asking the fan’s name. The Highway actress congratulated her and also blew some kisses to her.

A post shared by Alia Bhatt | She noticed 💓 (@alia_bhatt_obsessed_)

One lucky also got the chance to interact with Alia Bhatt. The fan can be heard calling the actress’s name. She waved at her fan who reminds her that they met in 2014 to which the Student of the Year actress tells her that she remember her face. The fan got emotional by this sweet gesture by her favourite actress and Alia being sweet as always said, “Don’t cry.” Aww! lucky fan though.

Karan Johar is the director of the film Rocky Aur Rani Ki Prem Kahani, he will be returning to the director’s role after 5 long years. His last film Ae Dil Hai Mushkil starring Ranbir Kapoor, Anushka Sharma, and Aishwarya Rai Bachchan in the leading roles.