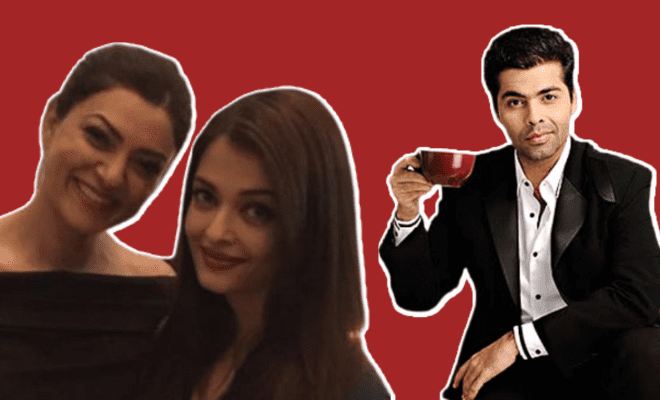 A while back, Karan Johar suddenly became the talk of the town after he announced that his legendary show, Koffee With Karan will not be shown on TV anymore. Most assumed that the talk show is about to be cancelled and many including me were upset as the show is a fan favourite and is loved by many. And while I am not big on watching talk shows, Koffee With Karan has always been so entertaining and fun to watch that I have followed it all these years. However, KJo then went on to say that the show will be streamed on Disney Plus Hotstar. As if I haven’t had enough men play with my feelings that Karan Johar joined the party too. However, there have been speculations on who the guests for season 7 will be and it seems as though actresses Aishwarya Rai Bachchan and Sushmita Sen might be seen on the couch, playing for the hamper!

Several new pairs will appear on Karan’s coffee couch this season. The season will be star-studded, with many celebs set to join KJo at the coffee table. Aishwarya Rai Bachchan and Sushmita Sen are reportedly set to appear on the couch talk show together for the first time. According to the report, the two beautiful actresses, Sushmita Sen and Aishwarya Rai Bachchan have always been compared with one another and haven’t given an interview in decades. As a result, their first meeting will be iconic and I am here for it!

Also Read: Aishwarya Rai Bachchan Gets Trolled For Her Cannes Day 2 Look. Are Female Celebs Not Allowed To Age Or What?