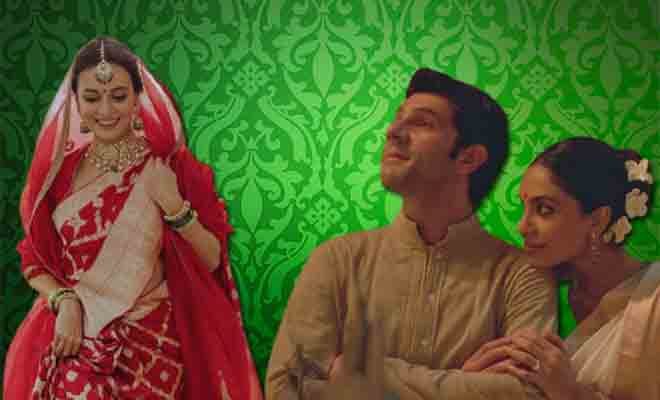 Dia Mirza, Jacqueline Fernandez, And More Will Reportedly Play Brides In Made In Heaven Season 2. This List Got Us Excited!

I think I stopped believing in ‘Marriages are made in heaven’ a while ago. But I do believe that Made In Heaven has the heavens showering success and accolades on it for all the hard work the cast and crew has put into making it. The Amazon Prime Video series, starring Sobhita Dhulipala, Arjun Mathur in the lead, not only won audience hearts with it portrayal of modern relationships and Indian weddings but also quite a few awards and even an International Emmy nomination for Arjun Mathur for his performance. One of the highlights of Made In Heaven Season 1 were the cameos from actors like Deepti Naval, Shweta Tripathi Sharma, Amrita Puri, Manjot Singh, Pulkit Samrat and more featured as brides and grooms for the episodic weddings. For Season 2,  Made In Heaven is planning to go grander. The roster boasts of big names like Dia Mirza and Jacqueline Fernandez! If you’ve watched Season 1, you know one of the things to look forward to in every episode, apart from the grand wedding and drama bits of course, is who would be playing the bride and the groom. And for Made In Heaven Season 2 consider the ante upped. If reports are to be believed, they’ve managed to cast Dia Mirza, Jacqueline Fernandez, Mrunal Thakur, Radhika Apte, Shibani Dandekar and Neelam Kothari as some of the brides!

I mean, colour me excited because that’s quite the list. As if we needed any more reasons to look forward to the new season, after the first one ended on an epic moment. Remember the shot of Shobhita as Tara Khanna draped in all that bling, chilling in the bathtub as she smokes a cigarette? What a sight!

What’s perhaps even more exciting is that even though we don’t know what their stories would be as yet, I do hope that these actresses get to play brides like they’ve never gotten a chance to play before. For example, Jacqueline’s always had this glam role in Bollywood movies, and it would be fun to see her move out of her comfort zone and do something different. Similarly, if indeed Radhika Apte is playing one of the brides, I’d love to see her just let go and have fun because she’s usually cast in these sombre, intense parts.

Made In Heaven, which also stars Jim Sarbh, Kalki Koechlin, Shashank Arora and Shivani Raghuvanshi, was created by Zoya Akhtar and Reema Kagti, and produced by their Tiger Baby Films and Farhan Akhtar and Ritesh Sidhwani’s Excel Entertainment.

Dia Mirza Says Looking Too Good Can Also Be A Disadvantage For An Actor, And Her Reason Makes Sense!