On Thursday evening, veteran costume designer Bhanu Athaiya passed away at the age of 91. According to her daughter Radhika Gupta’s statement to the press, Athaiya had been diagnosed with a tumour in her brain eight years ago. Since three years, she had been bedridden as one side of her body was paralysed. The Oscar and National Award-winning costume designer, in her career spanning nearly five decades, showcased her brilliance in over 100 films. She not only worked with the some of the biggest filmmakers in Bollywood, such as Guru Dutt, Raj Kapoor, Dev Anand, Yash Chopra, Vidhu Vinod Chopra and Ashutosh Gowarikar, but also international filmmakers like Sir Richard Attenborough for Gandhi and Conrad Brooks for Siddhartha.

My love for movies preceded my love for fashion. For anyone who loves movies, the Oscars are a venerated honour. My first memory of India being spoken in the Academy Awards context was when Aamir Khan’s Lagaan was our official submission and was chosen for nomination in the Best Foreign Language Film category. The feeling of pride and a curious mind at the age of 12 years made me read up on the Ashutosh Gowariker film’s making and the people behind the scenes. And it is then that I discovered who costume designer Bhanu Athaiya was.

What blew my mind was that Athaiya was the the first Indian to bring home an Oscar, for designing costumes for Sir Richard Attenborough’s Gandhi (1983). And suddenly, that pride hit different.

In her book, titled The Art of Costume Design, Bhanu Athaiya talked about how it was her friend, actress Simi Garewal who had worked with her on Conrad Brooks Siddartha, who got her to meet with Attenborough for Gandhi. Athaiya wasn’t too sure if she was up to it, since it was radically different than the glamourous outfits she’d design for Bollywood. But a meeting with the filmmaker brought her on board. And then, she laboured to create costumes not just for Ben Kingsley, who played Mahatma Gandhi, and Rohini Hattangadi, who played Kasturba Gandhi, but also the huge number of extras.

“An Indo-British co-production, Gandhi was considered a major film. All the heads of department like the director, scriptwriter, cameraman, production and set designer came from England. I was the only Indian head, sharing the costume department with John Mollo, the Oscar-winning costume designer of George Lucas’ cult classic Star Wars. Mollo handled the British costumes while I handled all the Indian costumes. I had to be prepared in just three months. Covering a span of half a century, with so many events, incidents and changes in time and style, was not easy. The looks of the principal characters had to undergo constant change with age, as the story progressed. I worked day and night, like a person possessed, to meet the deadline. I would comb the museums and libraries in Delhi to gather all my reference material.” (Excerpt from her book, published by Harper Collins)

Whether you’re a millennial who loves retro Bollywood songs or a Gen Z who has barely any knowledge of it, the moment I say Mumtaz, the image of her dressed in that sexy, figure-hugging orange saree is bound to pop up in your head. There are plenty of things that add to the popularity of Brahmachari song ‘Aaj Kal Tere Mere Pyaar Ke Charche’. And Mumtaz’s iconic orange saree is definitely one of them. The ‘Mumtaz Saree’, as it came to be known thence, has been replicated numerous times by Bollywood for tribute performances, and even adapted by current costume designers for today’s leading ladies!

The pre-pleated saree donned by Mumtaz has inspired the ready-to-wear half sarees that’ve become increasingly popular with young women who don’t want much of the hassle that comes with draping the regular ones. Since Mumtaz had to match steps with an energetic Shammi Kapoor in the song, she wasn’t too sure she could do it comfortably in a saree. The talented Bhanu Athaiya then came up with this one, which was pre-pleated and had a zipper on the side. It also hugged her curves in a way that accentuated them when she did those iconic dance moves!

Whether it was Waheeda Rehman’s iconic sarees from Guide or Sadhana’s tight fitted churidars and looks from movies like Waqt and Mera Saaya, it was all Bhanu Athaiya!

Bollywood’s retro looks are some of the most recurring trends that evolve and influence Indian fashion today. And designer Bhanu Athaiya was responsible for dressing up the trend-setting actresses like Waheeda Rehman (CID, Pyaasa), Vyjayanthimala (Amrapali) , Sadhana, Zeenat Aman (Satyam Shivam Sundaram), Sridevi (Chandni), Dimple Kapadia (Lekin, for which she won a National Award for costume design), Manisha Koirala (1942 A Love Story)  in the most memorable outfits. 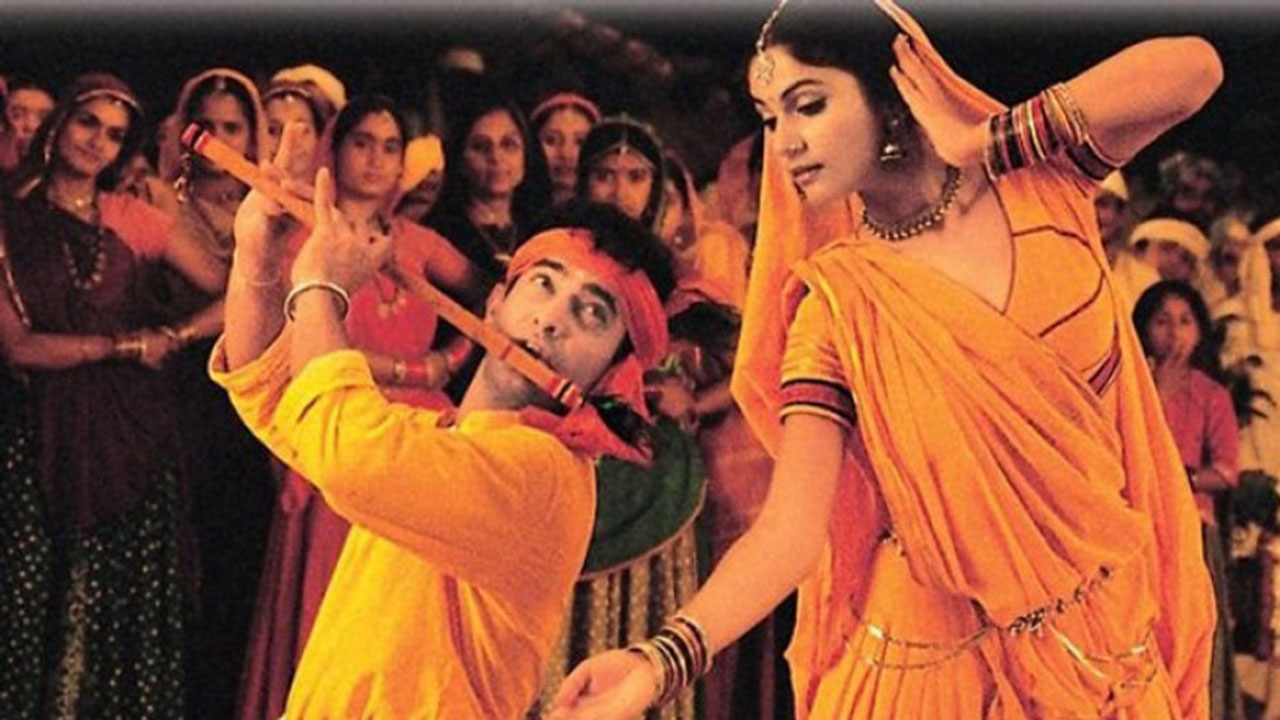 She worked on two movies with Ashutosh Gowariker. Athaiya designed the costumes for another Oscar contender, Lagaan, from dressing the Indian villagers like Aamir’s Bhuvan and Gracy Singh’s Gauri in warm and earthy colours to choosing a pastel palette for the British society ladies and the blazing red jackets for the officers of the East India Company. She won a National Award for the film. 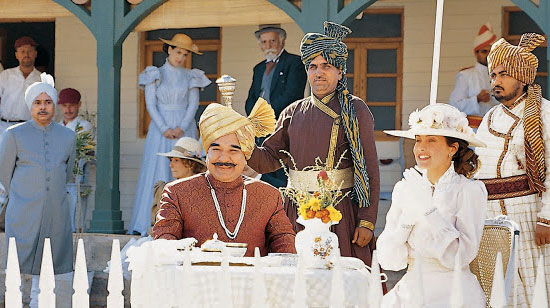 In fact, one of her final assignments was designing costumes for Gowariker’s Swades, starring Shah Rukh Khan and Gayatri Oberoi. While Gayatri’s character was adorned in simple yet elegant sarees and salwar kurtas, SRK’s Mohan Bhargava, who is an Indian-American, was dressed in semi-casual shirts paired often with jeans. 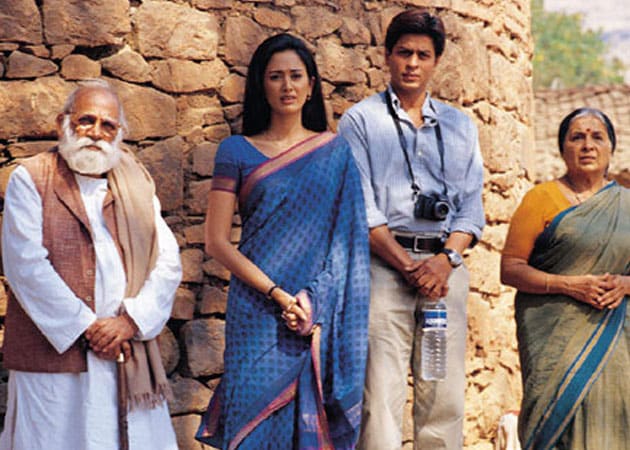 Bollywood mourned Bhanu Athaiya’s passing, celebrating the ways in which her work touched their lives.

“ RIP 1st Indian costume designer to get an Oscar #BhanuAthaiya.We may not have adequately understood her contribution.She created an authenticity and mood through her well researched work 4 film #Gandhi where every sari and dhoti told a tale. The passing of an era”.RITUKUMAR pic.twitter.com/7v1Z2z2kuv

Bhanuji was one of those film people who beautifully combined accurate research and cinematic flair to bring to life the director's vision.

You will be missed Bhanuji 🙏.

My heartfelt condolences to the family.

RIP Bhanu Athaiya,
What an amazing body of work – Oscar winning costume designer for Gandhi, the inventor of the Mumtaz saree… an inspiration to so many young designers…Her legacy will live on forever. My condolences to the family. pic.twitter.com/qvRRaETfNF

RIP Bhanu Athaiya🙏🏽🙏🏽🙏🏽 What an amazing, committed Costume designer she was. Winner of an Oscar award, the pride of our country, yet so very humble. I had the great privilege of working with her in the Marathi film " Katha Don Ganpatravanchi" 🙏🏽🙏🏽🙏🏽

Bhanu Athiya was the First Indian to win an Oscar in 1983. Her achievements brought glory to Indian cinema and Pride to the entire Country. Was blessed to have her for our film #Prem. She will always be an inspiration to all costume designers n stylists. #RIPBhanuAthiya.

India’s first Oscar winner #bhanuathaiya is no more. You been a guiding light, when nobody even heard of the Oscars you won it for us, you been an inspiration … May your soul Rest In Peace… It’s a huge loss for me personally and @TheAcademy #RIPBhanuAthaiya pic.twitter.com/316wly10S4

I was seated along with the other four nominees in my category for La Traviata, Victor/Victoria, Sophie’s Choice and Tron. All said that they didn’t stand a chance and that the Oscar would be mine because my canvas was so huge: Bhanu Athaiya in her memoirs. #BhanuAthaiya pic.twitter.com/JHnAGvyEMu

Just a small glimpse of her genius. It was because of her that we (and the makers) understood the importance of costume in Indian cinema.
They don't make them like her anymore.
You will always remain an inspiration #BhanuAthaiya . RIP 🙏 pic.twitter.com/63WwO8w5cV

Sye Raa Narasimha Reddy Has It’s Ladies In Sarees That Are Double The Usual Length. We Have All The Costume Styling Deets