Ankita Lokhande Asks Why Rhea ‘Allowed’ Sushant To Do Drugs. Why Is A Woman Being Blamed For A Grown Man’s Choices? 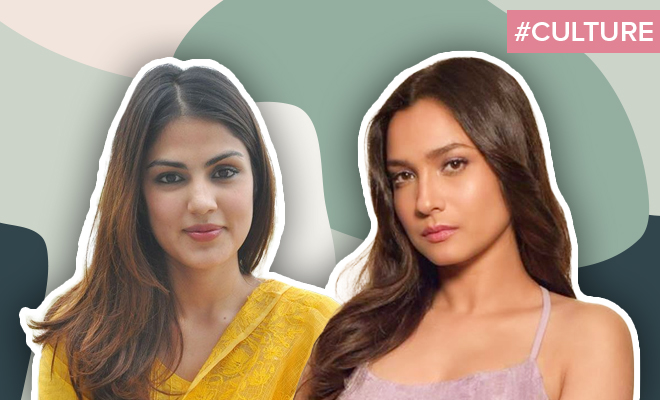 I know a family friend who has severe diabetes. He’s landed in the hospital a couple of times because of it. And yet, he enjoys his whiskey almost every other day, despite repeated pleas from his family members to give up the fatal habit. Do we assume they, his wife and kids, don’t care about him, or love him? Definitely not. Certain choices have to be one’s own responsibility, and no amount of cajoling or sternness from their loved ones can change one’s mind to give up that choice. The reason I’ve indulged you in this emotional story is because I woke up this morning to the news of Ankita Lokhande, Pavitra Rishta actress and Sushant Singh Rajput’s former girlfriend, posing a question to the incarcerated Rhea Chakraborty that how could Rhea ‘allow’ SSR to consume drugs if she deeply loved him. And in case you missed the insidious patriarchal notion behind this statement, it might explain why exactly Rhea had to wear that ‘Roses are red’ slogan t-shirt to make the point so obvious.

Here are the facts we know for sure, so far. Rhea Chakraborty has been arrested by the Narcotics Control Bureau on drug usage related charges. There was no possession charge because no drugs were found on her. Let this be clear. Nor has there been any statement made that she coerced Sushant Singh Rajput to consume drugs, which have been revealed to be weed/ganja, the usage of which is so rampant in our country right now, that all you’d have to do is walk to your nearest paanwallah and find someone lighting one up.

When Rhea was arrested, Bollywood and television industry, both of whom stake a claim on Sushant’s stardom, was rather divided. Now, to be clear, nobody said that the actress shouldn’t have been arrested or questioned. It was just the whole media trial and lack of basic human dignity accorded to a woman that was the bone of contention for us. The quote on Rhea’s t-shirt—Roses are red. Violets are blue. Let’s smash the patriarchy. Me and you—was reshared by celebs like Taapsee Pannu, Vidya Balan, Abhay Deol, Sonam Kapoor, Shibani Dandekar, Anurag Kashyap and several others in solidarity with a more humane treatment for the actress. The poem was then twisted into different variations and posted by actors like Kamya Punjabi, Sameer Sonii, Vikas Gupta, and others, who showed support for #JusticeForSSR.

Also Read: Rhea Chakraborty’s Arrest Causes Bollywood To Rhyme About Patriarchy And Justice. Who Do We Believe?

Ankita Lokhande did not repost the poem, but shared a post about ‘karma’.

On Thursday morning, Lokhande wrote another lengthy post on her Instagram, but this time, she’s managed to get on the nerves of a few women with zero tolerance for patriarchal BS (including yours truly). In her caption, she clarifies that she has never mentioned if she thinks Sushant Singh Rajput’s death was a murder or a suicide, and has full faith on the state/central authorities that the justice she seeks for SSR will be found. So far, so good.

But then she goes on to speak directly to the Bollywood folks who sought #JusticeForRhea, asking them how they never stopped Rhea Chakraborty from ‘allowing’ SSR, a depressed man, to consume drugs. Instead, because Rhea was into drugs too, she let it happen.

Now here’s where it might get tricky to comprehend where exactly the patriarchy bit sets in, so pay attention. At first, there is utter skepticism and denial about Sushant Singh Rajput’s mental health struggles. His father has himself filed a complaint against Sushant’s psychotherapist for revealing to the media that he was suffering from bipolar disorder. Now here’s Ankita saying that SSR’s mental health was delicate, thereby agreeing to the very fact that most of India is in absolute denial about.

But the most problematic thing about this statement is that, yet again, a woman is being blamed for a man’s decision. Sushant Singh Rajput was a good actor, a profound human being with a curious, scientific mind who also believed deeply in philosophy. at least that’s what all the poetic eulogies portrayed him as. He was 34, and well capable of making his decisions. Now to blame someone else, a woman particularly, for not being able to convince him to give up his drug habit (which we don’t even know when he got into) is a result of years of ingrained patriarchy that always, always ends up blaming women for men’s mistakes. We’ve seen that a lot na—remember blaming Anushka Sharma for Virat Kohli’s bad form in a game because she ‘distracted’ him. Or a mother being blamed for her son’s bad behaviour? Or saying Deepika Padukone was the bad luck charm in the lives of all the men she dated, from Nihar Pandya to Yuvraj Singh and Ranbir Kapoor?

It is understandable that when a young, bright person leaves us, we want to remember them by extolling their virtues. But do we have to turn them into a saint? Is it not entirely possible that Sushant Singh Rajput had some vices that were his own choice and no amount of ‘allowing’ or ‘not allowing’ by Rhea would’ve made a difference? Several women, including actress Shibani Dandekar, echoed this sentiment, calling patriarchal bullshit on the statement that if a woman loves a man, she shouldn’t ‘allow’ him to ruin his life.

This woman clearly wants her 2 seconds of fame and has capitalised on Rhea being targeted because she has had never dealt with her own relationship issues with Sushant.. she has been the driving force behind this and she needs to be called out! https://t.co/egM6iZRuHU

He was 34. He knew what he was doing. Stop treating him like he was a perfect little angel. He was a good human being who had his flaws.

Who is she to allow him ? His mother? He was a 32 year old adult, he knew what he was getting into.

In this case. They have grown-up adults, its a choice until it's not forced, loving a person doesn't mean, they can control another individual choice of goods and bad habits.

Here’s a thread by journalist Rohini Singh that further explains why Ankita Lokhande shifting the blame to Rhea Chakraborty is a classic example of patriarchal woman-bashing.

Another princess of patriarchy. A 28 year old woman is being held responsible for the conduct and choices of a 34 year old man because everyone needs a woman to blame for the tragedy of a man. https://t.co/AdDrD4uFbQ

They are happy with reflected power, and being the supporters and patrollers of a male system. They are the first to pull down any woman who steps across lines set by men. They could be female politicians and journalists who portray independent women as deviants. (2/8)

They put the onus of a man’s conduct and his choices on the women in his life. Without direct power, they rely on gossip and manipulation, using stereotypes that hurt all women – the vamp, the home-breaker, the chudail. They will never hold a man accountable for his actions.(4/8)

They have concluded Rhea did not love Sushant because if she did she would have cured him of his mental health issues. Rhea was not his therapist or his spiritual guide. All of Sushant’s issues have been pinned on his last girlfriend. Not his family, not the choices he made.(6/8)

In fact, if anything, he had a lot of other friends, his own family, who missed the signs! Would it then be prudent to wonder that if Ankita herself cared for him deeply, why did she not check up on him in his unstable situation and find something amiss? Didn’t she date him for a long time? Weren’t they friends even after? Of course, that line or argument would be a stupid one, because sometimes, it is really hard to know what’s going on in the lives of our loved ones, even when we’re living in the same house. In fact, in India, secrecy about one’s mental health is such a huge part of our lives, because talking about one’s feelings is discouraged.

The thing to remember here is that none of us know the actual truth, other than the people involved in this matter. We’re all going on face value here, and the statements that come directly from the authorities (NOT news channels, please). Going by those, it is nowhere stated that Sushant Singh Rajput’s drug usage was a direct effect of his relationship with Rhea Chakraborty, or that she forced him to consume them. So for now, making these ridiculous statements where a woman must be responsible to keep a grown man’s habits in check, like she is some sort of a rehab centre for him, is exactly why we need to smash that patriarchy out of this case and see it for its plain facts.

Also Read: Kangana. Political Spat. Demolition. BMC. And A Pandemic. If You Aren’t Able To Keep Track Of What Happened, Here’s A Timeline