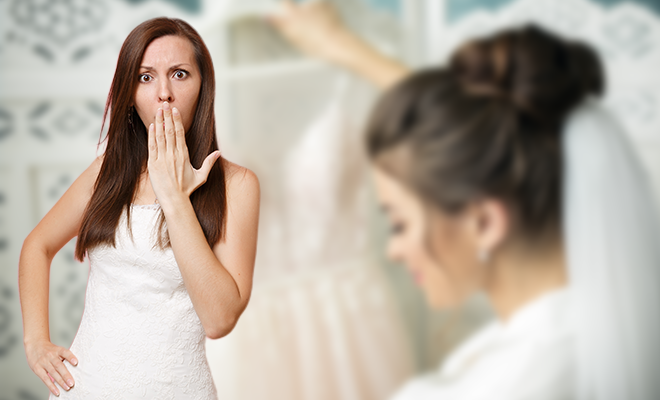 A Woman Realises She Has Had The Wrong Wedding Dress All Along, Begins The Quest To Find Its Rightful Owner 14 Years Later

Imagine this. You get married in your dream wedding dress (did you instantly think of a Sabyasachi lehenga? Cuz, same). Anyway, moving on. You looked gorgeous, took millions of gram-worthy pictures and then sent to it the dry cleaners the day after. Since its too heavy and you don’t want to mess up the expert folding of the lehenga, you keep it safe somewhere when it arrives and never get the chance to look at it, until one day your daughter asks you to show it her. And, then you realise that you received the wrong dress and have been missing your own all these years. *Gasp* Sounds like something straight out of a movie, right? Well, I am not making this up. It actually happened to a woman who found out that she was involved in a wedding dress mix up 14 years later it happened. Excuse me for being a bit dramatic, but I would have fainted if one day, out of nowhere, I discovered that I am missing my wedding dress and have a stranger’s bridal dress all along.

Wendie Taylor wore a beautiful dress on her wedding and apparently never saw it again until she opened the box from Evans Garment Restoration, where she sent her dress for cleaning and preservation. What led to this shocking revelation was also pretty cinematic. You see, Taylor was watching American drama series Gilmore Girls with her 12-year-old daughter McKayla and while bonding over an episode, they got to talking about her wedding dress. She told CBS, “After the episode, McKayla and I were talking and I said, ‘You’ve never actually seen my dress.’ And she said, ‘No, I haven’t, I’ve just seen pictures.’ We open the box and … she saw the look of horror for lack of [laughs] because it wasn’t my dress.” She added, “It’s a beautiful dress. It’s not my dress.”

HELP!!!! Please read, share, and help me recover my wedding dress and return the one I have to is owner!!! My dress was…

Also Read: This Woman Turned Up In A Wedding Gown At Her Fiance’s Work Along With A Priest. Things Only Escalated From There…

After years of keeping a stranger’s wedding dress and missing her own, she decided to hop on social media, the most efficient tool of the moment, to clear up this wedding dress mix-up mess. And from there began her quest to find her wedding dress and trace back the owner of the one she had. She posted the wrong bridal dress and her pictures from her wedding on Facebook and wrote, “HELP!!!! Please read, share, and help me recover my wedding dress and return the one I have to is owner!!!” She also mentioned where and when the mix up happened. “My dress was cleaned/preserved by Evans Garment Restoration in Minnesota this would have been late 2006 or in 2007. Evans does Restoration after fire or water damage. So most likely whoever has my dress had the work done through their insurance company as part of a claim and Evans was probably a sub contractor and not the one you are aware of working with,” she wrote.

She culminated the post by giving the details of the dress and the box it came in. She wrote, “I have included a picture of the dress I have, it is from David’s Bridal size 10. My dress is in the photos as well. I would love to find my dress and trade back. This was quite the shock when I opened the box to show my daughter and found the wrong dress. Thank you in advance for your help!!!!! Updated photo includes a picture of the box that dress was kept in.”

We sincerely hope that the other bride who misplaced her wedding dress long back too reaches out to her and both women get their dresses back. Also, the lesson I’m taking from this funny but unfortunate incident is that you should always double check if you received the same item you sent to the laundry or dry cleaners, no matter what!

Also Read: This Woman Lost Her Engagement Ring At Work Packing Parcels. She’s Hoping A Customer Will Return It. We Hope So Too