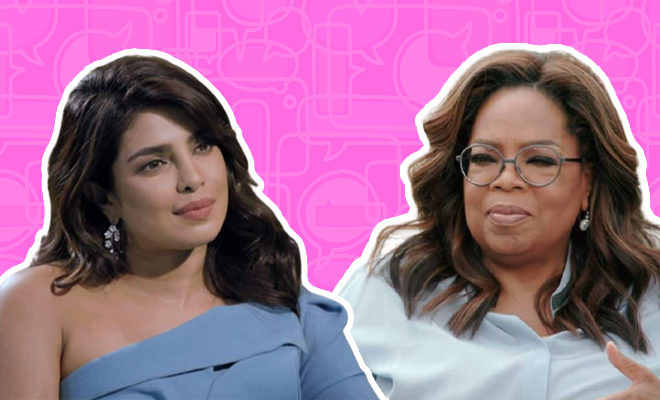 Priyanka Chopra Jonas. Naam mein wazan hai. And kaam mein…. The once upon a time Miss World winner really took that title to a whole new level by becoming a true global icon. From conquering Bollywood, to firmly planting her foot in Hollywood, headlining a mainstream American series, playing a pivotal role in a big banner Hollywood film, and now being the star and producer of an Oscar-nominated one, and being the first Indian to announce the Oscar nominations! Is there anything the woman can’t do? And no, we didn’t include her marriage to Nick Jonas in her list of accomplishments because let’s be honest, she’s the total catch and National Jiju is the lucky guy! No wonder, as Oprah Winfrey said in her episode of Super Soul with PeeCee, at 38, she’s already penned her memoir, Unfinished.

The episode that aired the weekend and is currently available to watch on Discovery+ had The White Tiger actor talking at length about her life, family, the Miss World win and her subsequent career in Bollywood, her father’s passing, meeting Nick Jonas, getting married and of course her book. It was quite the conversation, though none that made Oprah replicate her look of utter shock and that “What?” From the Meghan Markle and Prince Harry interview.

But for the desi and videos fans of the desi girl, there was plenty to unpack. Here are five major revelations Priyanka Chopra made during the interview with Oprah Winfrey on Super Soul.

1. On being mistreated by a Bollywood filmmaker early on in her career

PeeCee revealed that when she was still a newcomer in the industry, she was asked to do a dance number in a film, and it made her uncomfortable. The director said things like “panty must be visible” but PeeCee couldn’t call him out for mistreating her because she was afraid of getting a reputation of being difficult to work with.

“[Growing up] I was told to have an opinion in a room that disagreed with me. I was always encouraged to have a voice. [However] I was so scared. I was new in the entertainment business and girls are always told that ‘you don’t want to get a reputation of being hard to work with.’ So I worked within the system.” She eventually quit the film.

2. On being spiritual over being religious

Priyanka Chopra is a Hindu but she told Oprah how she is more spiritual than religious. She believes in a higher power and was exposed to multiple religions growing up, and thinks all religions are simply different means to a common end—to reach that supreme power.

“I think in India its hard not to, you’re right – with the swirling number of religions that we have that live within the country as well. I grew up in a convent school. When I went to school I was aware of Christianity. My dad used to sing in a mosque, [so] I was aware of Islam, I grew up in a Hindu family I was aware of that. Spirituality is such a large part of India that you can’t ignore it.”

PeeCee’s remark about her father singing in mosques received quite the backlash on social media, with many pointing out that there is no singing in mosques, and she probably means a ‘dargah’. While some believe it to be a simple slip-up, others say it is a very pathetic attempt at garnering a Muslim fan base.

“Also my family really believed in having a higher power and having a sense of faith. This is again something my dad used to tell me, he was like basically religion is all a way to get to a supreme power and every religion has a different face to the same direction where we’re going – whatever your face is, whatever your version of that is, its just a means to an end. And so, I am a Hindu and I pray, I have a temple in my home, I do it as often as I can. But at the same time to me I am truly more spiritual I feel – I’m a believer of the fact that a higher power does exist and I like to have faith in that.”

3. Priyanka Chopra on her late father, Dr. Ashok Chopra and how his passing was a major test of faith for her

In June 2013, Priyanka Chopra lost her father, Dr. Ashok Chopra, to cancer. She was very close to her father and even has a tattoo on her wrist that reads ‘Daddy’s l’il girl’ in his memory. On Super Soul, Priyanka spoke about the time her faith was tested in the days leading to her father’s passing.

“At that time, [my faith] was tested…. I flew my dad to Singapore, New York, Europe, India, everywhere just to do whatever I could to prolong his life. It’s such a helpless feeling. I was very angry, my relationship with God changed a little bit…. But then, at the same time, I feel like God helped me find salvation and come out of it too. But at that time, it was tested. Oh man, I went to every temple there was to go to. I did every prayer there was to do. I met every godman or woman I needed to meet, every doctor I need to go to.”

She also spoke about missing him a lot and the peace she felt when he was around.

“I miss most about him just how unabashedly proud of me he would be in the littlest things. Even if I am having dinner and my plate is clean, my dad would be excited. If I wore a dress that I liked, my dad would be excited. From the littlest thing to the biggest thing, he would be the loudest in the room. I miss the noise, the excitement he had, the joy and investment he had in my life and just how excited he used to be about everything about me. I do feel that he’s been instrumental in me being where I am today. He’s helped me find a sense of peace, which I never had when he was around. He always saw me as a reckless, trying to get to the new place thing and he always wanted me to have a sense of peace. That’s when I feel him around, when I feel peaceful.”

4. On dating Nick Jonas and their lavish wedding ceremonies

Priyanka Chopra believes that her mother, Dr. Madhu Chopra, might’ve just manifested Nick Jonas into her life, because she wanted her daughter to find happiness and love. Priyanka told Oprah how, for her, her parents’ marriage and partnership was an ideal and she seems to have found that with Nick Jonas. But surprisingly, that wasn’t easily done. Their age gap made Priyanka thing Nick might not be someone who’d be seriously interested in settling down and she even ignored his texts, before finally agreeing to go out with him.

“I may have judged the book by the cover. I didn’t honestly take it very seriously when he was texting me. I was 35.  I was, like, I want to get married.  I want to have kids. He’s, you know, in his 20s.  I don’t know that’s something he’d want to do.  Like I did that to myself for a while. Till I actually went out with him. And nothing surprised me more than him.  He’s such a self-assured man. So sensible.  So excited about my achievements.  My dreams.  You know, such a true partnership that he offers me in, in everything that we do together. That I truly believe that my mom manifested him.”

The couple had multiple wedding ceremonies and PeeCee revealed her favourite part about it.

“My mom walking me down the aisle was a really big moment. I extended my hand for my mom to come, and I felt my dad’s presence in such a big way in that moment.”

5.  On The White Tiger and coming to India

The White Tiger has received international acclaim, and is nominated at the 93rd Academy Awards for Best Adapted Screenplay. Clearly, that’s a huge honour for Priyanka, who told Oprah Winfrey how she read the book a while back and was very keen to get on board as producer for the film.

“I had read the book in 2008 and I actually read that the movie was being adapted for Netflix on Twitter. So I told my agents to call and offer my services to as an executive producer because I was seeking work in America about 5-6 years ago. I just thought that it was not really in the consciousness of the filmmakers that a leading mainstream part can be played by a brown person. And I didn’t want the movie to be put into an ‘independent’ movie or put into a ‘genre film’ box which ends up happening when you see that the leading cast is all white. I really wanted to be able to executive produce it and get as many eyeballs as I can to the movie because the story is universal.”

While she awaits the fate of her film’s Oscar nomination, Priyanka Chopra has already wrapped up the shoot for Matrix 4 and a rom-com with Outlander and SAS: Red Notice star Sam Heughan, titled Text For You. In fact, this interview was actually shot by her and Oprah separately and then edited in post-production since the latter was in American while Priyanka is in London. She is shooting for the series called Citadel, which is being produced by Avengers: Endgame and Cherry filmmakers, the Russo Brothers, and stars Game Of Thrones, Bodyguard and Marvel’s Eternals actor Richard Madden.

If you’re wondering when we’ll see her back at her Mumbai home, she wishes she were back here already!