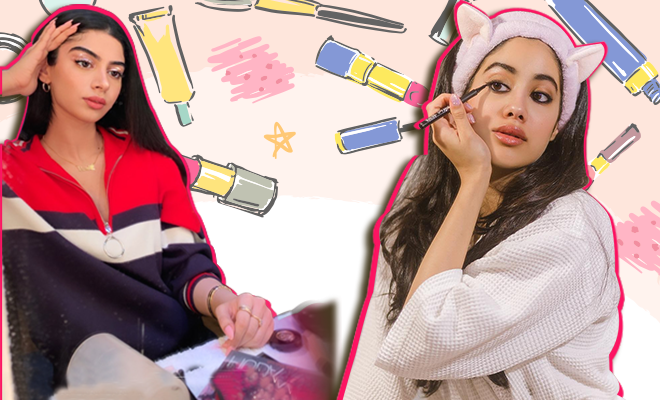 One thing women in the entertainment industry learn to do early on is their own makeup. Whether a young actress or a fashion model, they are usually well-versed with what works for them, some even capable of doling out good tips. One such young celeb who we think can rely on her makeup skills as an alternative career option is Janhvi Kapoor. Her muse was obviously her little sister and by the looks of her, Khushi Kapoor is enjoying every bit of it!

Just yesterday, Janhvi took to her Instagram stories to share a fun moment she was having with her sister and beauty team. Turns out, these girls pass their time while stuck in hotel rooms by doing each other’s makeup!

In the video, we can hear Janhvi be bashful about the glittery number she did on Khushi and another friend’s eye makeup and we gotta say, it’s quite impressive! We dig the fact that Janhvi chose to add shimmery lids to the otherwise fresh-faced vibe of the look.

We are not surprised that Janhvi would jump on the opportunity to do someone’s else makeup. The actress has displayed her beauty chops numerous times before. Most recently she featured in a Nykaa concept, taking the audience through her makeup routine. The video reminded us of the Vogue Beauty Secrets series, where we have a popular celebrity doing their face up to the camera. Which makes us wonder, is she up for doing a skincare feature, like the one Priyanka Chopra did? We’d watch it!

Janhvi will be next seen in Dinesh Vijan’s horror comedy Rooh-Afza, starring opposite Rajkumar Rao. Her first look from the film has already caused quite a stir among netizens because of its raw and elemental charm.

ALSO READ: Janhvi Kapoor, Your Dedication To Your Roles Is Cool But Can We See You In Something Glamorous On Screen Now?

The actress has decided to keep mum about the film. “So, I will not speak much about the film. I feel fortunate to be part of this film and to be working with people who are involved in it.”, she confessed. It’s scheduled for a release in March 2020 and we are already excited!