Women Opened Up About Being With Passionless, Sexually Incompatible Partners. It Messes Up Your Self-Esteem 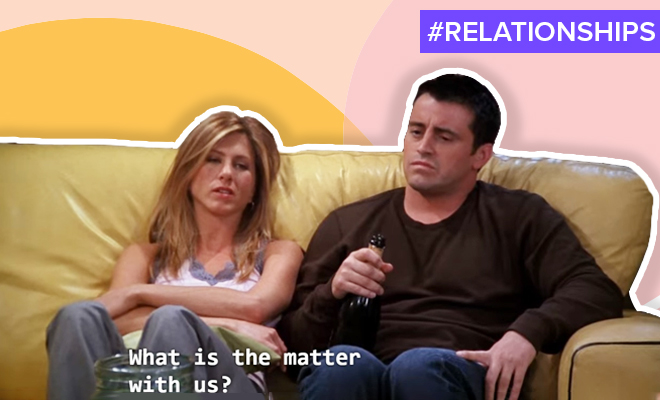 Do you remember the time when Rachel and Joey fell in love and had the cutest chemistry ever? Yeah, I like their connection much more than Rachel’s with Ross. (Yes, I know not many people are with me on this) And yet, after several attempts they just couldn’t get down to having sex. Their sexual chemistry was so off they just couldn’t get it on. Of course, they figured that having a relationship without intimacy isn’t what they want so they called it off. I’d say it was a right move because I believe our bodies really know chemistry before we do. And without sexual chemistry, for me, there’s no difference between a significant other and my best friend.

I have been in a relationship where I was deprived of physical intimacy. Let me tell you I value intimacy more than penis-in-vagina (PIV) sex. Of course, orgasms are important and for me, clitoral works so I can really live without sexual intercourse. But what is absolutely indispensable in my life is intimacy and foreplay. I show love through physical affection. I like sitting on my bae’s lap, cuddling him and receiving random kisses on my cheeks. Hug me from behind when I am least expecting it. Look into my eyes that says you could kiss the fuck out of me, right now. Without passion, it’s just dead and that makes the name of this Reddit community quite apt – ‘Dead Bedrooms’.

Several people have joined it with an intention to have a safe place where they can open up about the lack of sex or passion in their lives with their SOs. People are supportive of each other as they can really relate to the several posts revolving around the same basic plot – having a sexless relationship and what it does to their self-esteem and mental health.

A user recently posted, “I (f28) am so tired of trying. The other night when I made a move he (M29) said I can’t just ask to fuck. I said ok we’ve been together for twelve years and have a kid together I didn’t know you were a romantic all of a sudden and needed to be wine and dined or something but ok. So tonight I try a different approach that I thought he would like instead of just asking to have sex and I still get turned down. What the actual fuck. I’m not ugly, I’m not fat, I take care of myself, I try and be nice… what else can I do. Is Taco Bell and anime that much better than giving me any type of affection?” It is so frustrating because it really makes you wonder if you’re unattractive. Like why would any person call you over to Netflix and chill in the true, literal sense? Ask me to come over for some cuddles and pizza instead.

Someone asked this lady if she has had a word with him and seems like they have reached a dead end. “Yes and he kind of just dismissed it. He makes excuses. We have a separate downstairs basement at my family’s house and he says that people will know, the baby is up, he doesn’t like the way I ask, or he just says uh, uhh. I’ve tried talking to him about it multiple times but it seems to go in through one ear and out the other. Like he really doesn’t notice even after I’ve said something about it,” she wrote.

Another person opened up about how hurt she is by facing sexual rejection all the time by her partner. Apparently, after so long, they had sex and then it went back to no touching. “This is just a vent, I don’t know if anyone could even give me advice. I’m just so hurt. I(27f) had sex for the first time in over three months last night with my partner(29m) of 7 years. It was just ok, same boring vanilla, but honestly I was just thrilled for the touch, even if it was half assed. All day today I was waiting for you to come home because I was so turned on at the thought of being intimate with you again tonight. I came out after work to snuggle up on the couch and before I could even start I was rejected,” she wrote.

Clearly, the rejection hurts and she’s drifting away. “You know, I shouldn’t be surprised but rejection always hurts so fucking much especially when you play stupid and can’t understand why I get quiet and go into another room. Why I don’t spend time with you. I don’t initiate anymore because I know you don’t want me,” she wrote.

Unfortunately, she said she has taken up this home on a year’s lease and moving out will financially not be good. She stuck around for seven years hoping things will get better and Redditors and I believe it’s time for her to let go. “Man I felt that!!! I’ve been there before and I’m sure a part of you feels better for typing that out but you also need to tell him that word for word! If he doesn’t change then walk leave fuck that lease one more year of your life isn’t worth it!!! You deserve to be touched loved and fucked. Never settle for anything less,” a user wrote.

She seems to be getting attracted to someone else and she really craves physical intimacy but she doesn’t want to “cheat”. “I feel so guilty that I’m actually eyeballing other men because once upon a time I only had eyes for my SO but now I just feel like a roommate. I want to feel alive again. Masturbating just makes me sad, and wanting affection I can’t have,” she wrote. Can you really call it cheating when you deprive your partner of intimacy? If you stop taking care of her needs and refuse to give her affection, I am sorry but I would not blame that person for beginning to get attracted to other men. That’s how the cookie crumbles. It’s human to want love and affection.

Of course, emotional and physical satisfaction aren’t two mutually exclusive concepts. Someone wrote that because of lack of enough sex, she has been feeling distant from her boyfriend and understandably so. She explained, “I (23F) feel like I’m becoming emotionally detached from my boyfriend (22M) and he is certainly picking up on it. He’s noticing it and tries to help by telling me way more often that he loves me and wants to be with me forever. I talked with him 2 weeks ago about not having enough sex and although I know that conversation registered in his mind, I haven’t seen any follow up with him initiating anything sexual at all.” She concluded saying, “I would wait for him but if it’s at the expense of my confidence and happiness I don’t know if I can.”

Someone gave her the most logical advice, “You are the one in control here. Decide what you want (stay with him and don’t have sex, leave him and find a better partner, talk with him and ask him to change and then leave when he doesn’t….?) and then go get it. If you do nothing, then nothing will change. If that’s ok with you, you’re golden. If it’s not ok with you, then do something about it.”

Another user came by to get a few things off her chest. This one thankfully was able to get out of it and save her mental wellbeing. “I just need to rant. I honestly think my boyfriend is gay, or he’s just that unattracted to me. It’s been 6 long months, I’ve begged, cried, tried to have rational talks. I’m done. I can stand in front of him totally naked and he doesn’t care,” she poured her heart out. She further added, “I’m 23, I can find someone else who values me more than this piece of trash.” Yes, woman. I can feel you. Honestly, I feel if I sat naked in front of my ex, he would probably just do enough to turn himself on and then expect me to do him. Or he’d do nothing. So, if by sex we mean doing him then yes, we had a great sex life. Yep, I got done and not in the way that was pleasurable.

Then came a ray of hope in the lives of people afraid to move out of their dead bedrooms. A user talked about how she broke up with her boyfriend and went on to be with someone else, who makes her feel so fulfilled. “I will just leave this here…… leave if you arnt sexually fufilled. I was with a guy before my current partner today and we never had sex always rejected me and im hot take care of my body. Found a new bf and been together 5 years still have sex 3 days a week! Boners alot. Everyone deserves love. And sex (sic),” she advised.

ALSO READ:Here Are 5 Reasons Why Great Sex Could Lead To A Great Relationship

I can’t speak for anyone else but I absolutely cannot do passionless relationships, even if he is the nicest guy in the world. Without intercourse, yes, but not without foreplay, intimacy and orgasms. Honestly, it does great damage – it makes you feel unattractive, gives you self-esteem issues, makes you feel skin hunger or touch starvation and leaves you feeling resentful towards your partner. It’s very likely a person will end up finding that intimacy outside the relationship, complicating things even further. So I don’t believe in having one with someone who cannot do intimacy. And it doesn’t get better with time unless the very specific issues are identified and dealt with, possibly with the help of an expert.

ALSO READ:5 Reasons Why Sexual Chemistry Is Integral To Your Relationship

How To Get Over A Situationship Breakup? 6 Tips To Help You Move On

It's just a situation!

8 Reasons Why You Should Consider Coming Out Of The Closet To Your BFF This Year!

How To Know If You’re In A One-Sided Relationship? 8 Signs To Look Out For

You deserve a fresh start!

This is so important!

Try These 10 Ways To Have The Best Sex Of Your Life This Year!