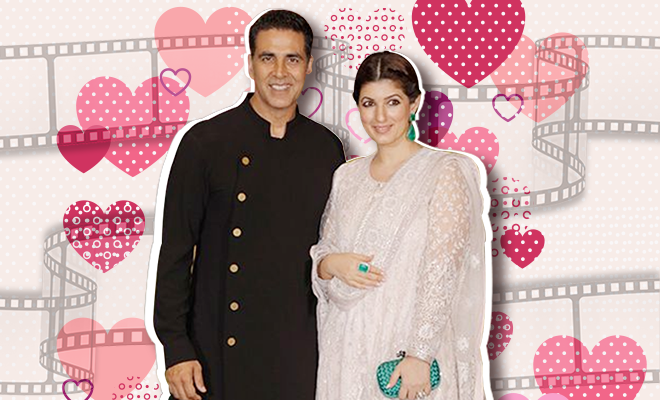 Akshay Kumar and Twinkle Khanna have been one of the most adored couples of Bollywood. While Akshay is known for his versatile acting skills, and his fit lifestyle, Twinkle Khanna is known for her witty and satirical writing. While Twinkle Khanna too pursued acting in her younger days, she later realised that wasn’t her calling. To the relief of many of us. However, Twinkle a.k.a Mrs Funnybones took to writing and her columns and books that made us perceive her rather differently. She fearlessly voices her opinions, often sprinkling them with sarcasm and oodles of wittiness.

Katrina Kaif’s Vacation Pictures Are Proof That She Can Do Natural, Tanned And Bikini-Clad Like No One Else

Twinkle is a strong-headed woman and we feel that her advice has definitely motivated Akshay Kumar to do movies with a social message, such as Toilet: Ek Prem Katha and Pad Man. In fact, he says that wifey Twinkle has been a great support and guide for him when it comes to movies.  Akshay said, “Yes, my wife has been a very big help in my career. It’s not that I have to discuss every script with her before I give it my nod, but she talks to me and I remember [those] things. She told me once, ‘Koi zor zabardasti nahi hai, jo achha lage karo’.”

Twinkle Khanna and Akshay Kumar have two kids, Aarav and Nitara. Their romance is so cute! Akshay had revealed in Koffee with Karan that Twinkle was very confident that her movie Mela would be a hit. She told him that in case the movie fails, she’d marry him. Fortunately for them the movie flopped big time, and they ended up getting married soon after.

The couple are in London for a short vacay, before the actor starts shooting for Rohit Shetty’s Sooryavanshi. Once he returns back to the bay, he will also commence the promotions of his next Mission Mangal alongside Vidya Balan, Taapsee Pannu, Sonakshi Sinha, Kirit Kulhari, Nithya Menen and Sharman Joshi. The movie depicts the story of India’s mission to Mars and is co-produced by Akshay Kumar and R Balki. Mission Mangal is all set to release on August 15!

Deepika Padukone Working With #MeToo Accused Luv Ranjan Has Us And Twitter All Riled Up And Rightly So!