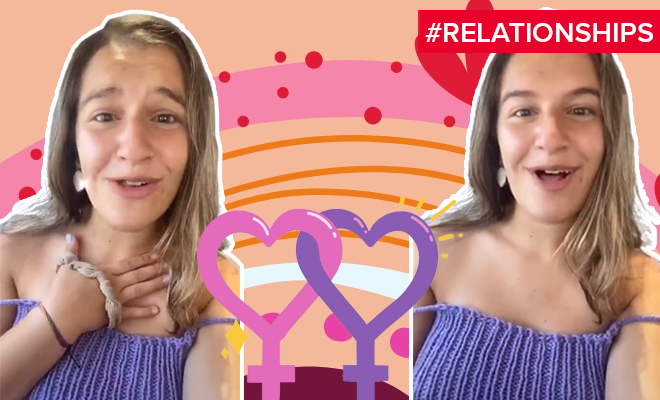 Do you ever think about what Carrie said in Sex and the city about our girlfriends being our soulmates and not men? I don’t feel any divine, transcendental connection with my bestie but I know that she understands me perfectly and we never have to pretend. Meanwhile, I have felt overwhelming passion for men I have dated but I guess that’s just attraction or love. I am not saying there are no soulmate romances between a straight couple. What I am saying is women do understand each other better.

Now imagine throwing in lots of romance into that equation! A woman, Jillian Leigh went on her first same-sex date and she has been left feeling pleasantly surprised. She made a video of how her first date with a woman went and it has made netizens feel all warm and fuzzy inside.

The women decided to have a park picnic on their first date and I am already sold here! “We met in a park and set up a picnic. And we both made a bunch of food for each other. The first five minutes of the date was us being like ‘You’re so beautiful!’, ‘No, you’re so beautiful!’,” she said. Wow, guys pay compliments by getting nervous around you or having their jaws dropped to the basement.

While they were there, she ended up having her period, apparently on the white sheet her date had laid out. But her date soothed her by saying, “Oh my God that is so pure and holy!” They instantly clicked and ended up talking for an hour before even starting to eat. “And then we were just talking so much that it took us an hour before we actually started eating! We ended up talking for six hours until everyone else was gone,” she said excitedly.

Jillian then went to her date’s house where they had an amazing time. “Then we went to her house. She made a fire to keep us warm, brought out mugs of tea and snacks for us,” she said. The woman further expressed, “We had been talking and laughing so much that we didn’t realise that it had been nine hours.” She concluded by asking, “Is this what dating women is like?”

This is so beautiful. I don’t know if this is limited to women or men can actually pull off such dates too. I have been with men on some really nice and chatty dates but then again, those have been over alcohol. But then the long walks by the sea after swallowing my inhibitions at the bar did seem super romantic. A lot of banter and laughter is what we want. On the other hand, we do have similar dates with our platonic female besties. I think it’s just that women are awesome and such dates are so therapeutic.

A couple of gay men pointed out how their same-sex dates were far different. “My first date with a man was cute, until hours later he texted me saying if there weren’t cameras around he would picked me up and fuck me in the middle of a parking lot,” someone wrote. “I went to get coffee and went to one of my favorite bookstores and we’re talking. Everything went well. After I go home he texts me saying Damn I would’ve f_cked you right on that bookshelf, if I could. I know you wanted it,” another guy pointed out. Thankfully, it didn’t pan out badly for Jillian

This is so sweet and filled with so much joy! I hope she goes on a million dates as wonderful as this one. Sweeping but arguably true statement: WLW culture is glowing like that pretty much all the time.

Tweets poured in and netizens were just happy for her while some wished they were into women too. “This is so sweet and filled with so much joy! I hope she goes on a million dates as wonderful as this one,” a user wrote. “I wanna be this happy too,” another user tweeted.

u KNOW that feeling when u wake up, roll over to check ur phone and a random tiktok u made in a CVS parking lot suddenly has 1.7 MILL views & thousands of women are saying they’re dumping their bfs bc of it and lots of queer teens r asking u to adopt them? CUZ NOW I DO & IM SHOOK

Jillian hadn’t expected her TikTok video to go viral like this but it did and she is still “shook.” “u KNOW that feeling when u wake up, roll over to check ur phone and a random TikTok u made in a CVS parking lot suddenly has 1.7 MILL views & thousands of women are saying they’re dumping their bfs bc of it and lots of queer teens r asking u to adopt them? CUZ NOW I DO & IM SHOOK,” she tweeted. I mean, I don’t blame those women but hey, now I want this too! So what if I am straight? Don’t I deserve some cute dates? Men, buck up!

ALSO READ: Desi Men Revealed Their Idea Of A Perfect Date And These Are Cute And Oh So Romantic