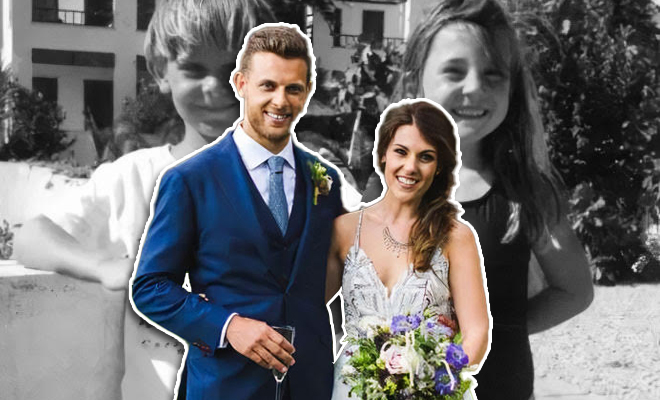 This Married Couple Realised They Had Spent An Entire Summer Holiday Together As Kids. Here’s Their Story Of Chance Encounters And A Fairytale Romance

There are two kinds of people in the world – those who believe that there’s a reason for everything and those who think life is a mere series of coincidences. Wait, there’s a third category and those are the ambiverts of this school of thought, like me. I believe it’s a healthy mix of things. I would not think too much about things like why my favourite box of cereal got infested with red ants. But I have always thought that people come into our life for a reason. At least that’s how I justify the relationships I had and not because my taste in men is rather questionable.

While most of us experience this universe’s calling in these unpleasant scenarios (for some it’s the entire relationship), a married couple Heidi Savitt and Ed Savitt are stunned with the co-incidence or destiny as some may call it. For the longest time, they believed that they first met in 2011 when they were both studying at Newcastle University. However, later they figured that their romance has a long history and this was just a comeback for them. The couple met when they were 6 years old on a family summer holiday and had immediately taken a liking to each other.

Ed was having difficulty using the washing machine in student accommodations so he decided to get in touch with the previous tenant. No points for guessing who that was. After many more weeks, the universe made them bump into each other again, when both of them were having a night out. The universe was probably like ‘wth get moving already!’ and so they did, thankfully this time. They went on a pizza date and they started dating. Their love grew and after some years, Ed proposed her and they got married.

So how did they find out that they met as kids? Ed and Heidi were having dinner with her parents and her mother remembered that Heidi had a boyfriend (if you can call him that at six) named Ed during their holiday in Turkey. They added two and two and realised that it was actually the same guy she married!

This was in 1997, 14 years before they met as adults. Both their families – one from Sheffield and another from London – were holidaying in Bodrum, Turkey. And during that vacation, Ed and Heidi had become inseparable and even have several pictures together.

ALSO READ: A Man Planned His Anniversary Celebration For His Wife Before He Passed Away. He Even Sent A Scheduled Email To His Daughter To Make It Happen.

In fact, the couple revisited the place where they holidayed together as kids and they have a mural of them there! Omg, this just keeps getting freakier. Destiny really brought these two together and maybe their subconscious mind remembered their childhood love. Which is probably why they instantly clicked. Wow, where is my soulmate? And why didn’t my parents let me chill with cute boys as a child?

ALSO READ: This Couple Got Married In A Chapel At The Hospital They Work At After Their Wedding Got Cancelled. How Romantic Is This?