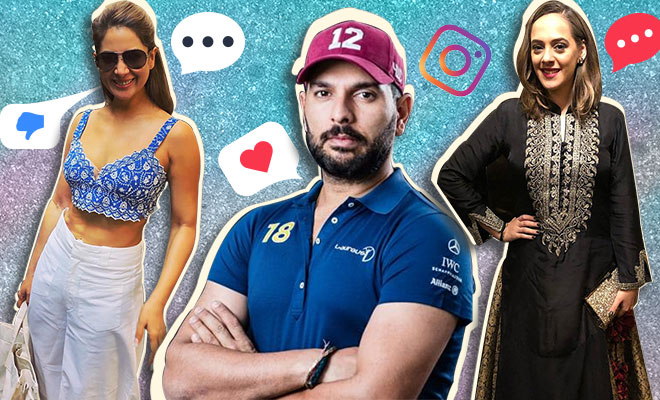 You know that feeling when all you want to do is curse your ex, and possibly burn all his belongings he left behind at your place? Well, that’s understandable but this is officially the era of ‘good vibes only’ so apparently we are all required to be decent and civil. while secretly plotting their murder in their head. We’ve seen how Katrina Kaif has buried the hatchet and been cordial with Ranbir Kapoor and Alia Bhatt. Deepika too, holds no grudge against Ranbir. And now, Kim Sharma has joined the bandwagon of exes that have made their peace. Yuvraj Singh and Kim Sharma were in a relationship for four years before parting ways in 2007. Things between them at that point weren’t very cordial but we’re glad they’ve come a long way, or at least Kim has!

So when Yuvraj Singh announced his retirement (after 25 years of being on the field), his loved ones and well-wishers extended their support to him. At a press conference in Mumbai Yuvraj expressed, “After 25 years in cricket I’ve decided to move on. Cricket has given me everything I have. Thank you for being a part of this journey. This game taught me how to fight, how to fall, to dust off, to get up again and move forward. It has been a lovely journey. See you on the other side.”

On that note, wifey Hazel Keech took to Instagram to welcome Yuvraj’s retirement from international cricket, and extend her support to her husband. She wrote, “And, with that, its the end of an era. Be proud of yourself husband, now onto the next chapter…. love you @yuvisofficial” While that is really sweet of Hazel, it didn’t surprise us. They are married and in love and all that. Most of us will even post stories about bae simply dozing off. But what really caught our attention was ex-girlfriend Kim Sharma’s response to it. She commented, “Shine brighter you lovely duo.” Where are all these good vibes coming from? If all of these celebrities have been going to a therapist who is infusing them with positivity, we need his contact.

Well played @YUVSTRONG12 A standing ovation for some unforgettable moments in sport . May your next phase be as smashing with @hazelkeech ?

You might think that’s all but Kim went ahead and tweeted a beautiful message for Yuvraj. She wrote, “Well played @YUVSTRONG12 A standing ovation for some unforgettable moments in sport. May your next phase be as smashing with @hazelkeech” And you may think that this gesture of Sharma must have been reciprocated with an equal amount of warmth. We did too, but seems like the duo would rather ignore it. Yes, while both Hazel and Yuvraj went ahead to respond or at least retweet the wishes of several others, Kim’s good wishes seemed to be lost in thin air. Or ignored. Now we don’t know if it’s to avoid any further controversy or if they simply (conveniently) missed it, but Kim Sharma and her tweet has been pretty much left hanging.

However, while we respect their need for personal space, it doesn’t hurt to extend some courtesy, right Yuvi? Maybe join the bandwagon of good vibes exes? It was rumoured that they had broken up because of Kim’s obsessive behaviour though some also say that Yuvraj had issues with her exposing in movies. Whatever it is, a lot of time has passed. Yuvraj Singh and Hazel Keech tied the knot in November 2016 and are in a happy marriage!

Meanwhile, several folks from Bollywood and sports industry showed their support for Yuvi.

May the magic of this Eid bring lots of happiness in your life and may you celebrate it with all your close friends & may it fill your heart with love and light.Eid Mubarak!! pic.twitter.com/6U189kuTJ5

My Warrior Prince – A true fighter on and off the field.. your stories will forever live on.. love always brother @YUVSTRONG12 #sixerking #Brother ❤️❤️❤️❤️?? #Legend pic.twitter.com/YN7580q8bY

Thank you for the memories @YUVSTRONG12 . You've been a warrior and inspiration to so many. I wish you the best in the next inning of your life ???

We will miss u world champion @YUVSTRONG12 … u have given us great memories and victories to cherish … I wish u all the best for the future ..I m sure cricket will miss u a lot too ☺️???

Kaan pakad kar retirement wapas khichwane ka dil kar raha hay. But I know bro u have made peace with it. Congratulations on the great career with so many great victories to Indian cricket @YUVSTRONG12 #yuvrajretires #Fighter #champion pic.twitter.com/P6eajET6f7

Congratulations on a wonderful career playing for the country paji. You gave us so many memories and victories and I wish you the best for life and everything ahead. Absolute champion. @YUVSTRONG12 pic.twitter.com/LXSWNSQXog

Thank you @YUVSTRONG12 pa for being a perfect role model. A real fighter on and off field. Wishing you the best in life. ?????

You are a hero and a legend which the world knows bout – but the remarkable human that you are,and luckily we get to knw u in this next phase too..its an end of an era, but the beginning of so much more with the next chapter in ur life motuuu.. BEST always. @YUVSTRONG12 ❤️ pic.twitter.com/57ExW2ddtU

Many congratulations @YUVSTRONG12 on your retirement. You have been, are and will remain one of the most inspirational sportsman ever! Thank you for all the wonderful memories. #YuviRetires

ALSO READ: Can You REALLY Be Friends With Your Ex? These Bollywood Celebs Say Yes!