Yash Chopra Called Bhagyashree The ‘Stupidest Girl In The Industry’ For Refusing Several Big Films. She Wasn’t Accepted Because She Was Married 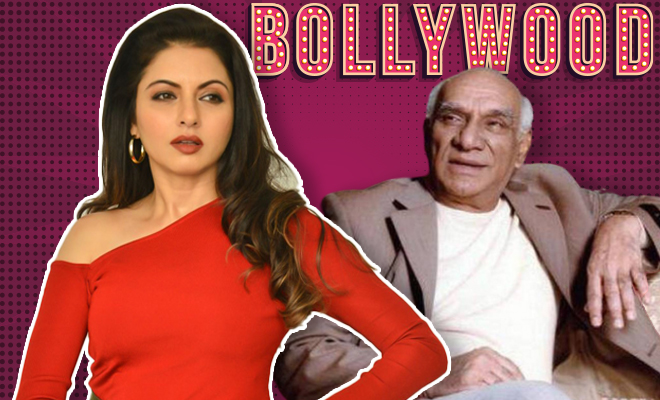 Everyone remembers Bhagyashree for her role in Maine Pyaar Kiya. Also because, she made that FRIEND cap famous which I wouldn’t be caught dead in, but to each his own. But everyone also remembers that despite all the love she received for that film, she disappeared off the face of Bollywood after that. Fans who were expecting to see more from the talented actress were left heartbroken. But it wasn’t just the viewers who were disappointed by her decision to not do many films after Maine Pyaar Kiya. Apparently, acclaimed director and ‘master of romance’, Yash Chopra, wasn’t impressed with her either.

Bhagyashree revealed in a recent interview that he called her the ‘stupidest girl in Bollywood’. She was also fired her in front of her son, Abhimanyu Dassani. She told Pinkvilla, “I actually refused most of the big films of that time. Every time I would meet Prakash uncle or Yashji (Yash Chopra), they would fire me in front of everyone standing in front of us. Even very recently, a few years ago, when I even walked up to Yash uncle and introduced Abhimanyu to him, he told my son, ‘Yeh tumhari maa hai na, woh industry ki sab se stupid girl thi’.” (“Your mother was the stupidest girl in the industry”).

“He really wanted to work with me and I would always say no. After Maine Pyaar Kiya, every big film was offered to me, especially the ones these directors have done,” she further added.

Bhagyashree did, however, return in 2014, for her television show Laut Aao Trisha. She has also revealed why she ultimately quit Bollywood. She said that society did not accept her in the industry as a married actress, and that she decided to stop acting to live a stress-free life with her husband, Himalaya Dassani, and her two children, Abhimanyu and Avantika. Her son Abhimanyu received a lot of praise for his performance in Mard Ko Dard Nahi Hota. Bhagyashree herself will be seen next in ‘Thalaivi’ starring Kangana Ranaut.

The film industry, both in India and in the rest of the world, puts a lot of pressure on its actresses. The idea that a married actresses’ career is over is heavily outdated and needs to be dropped. Deepika Padukone, Priyanka Chopra Jonas, and Anushka Sharma have proved that. And even if she does choose to quit Bollywood for her family life, that’s her choice, and one that she is entitled to. We need to stop making women feel bad about their personal decisions!