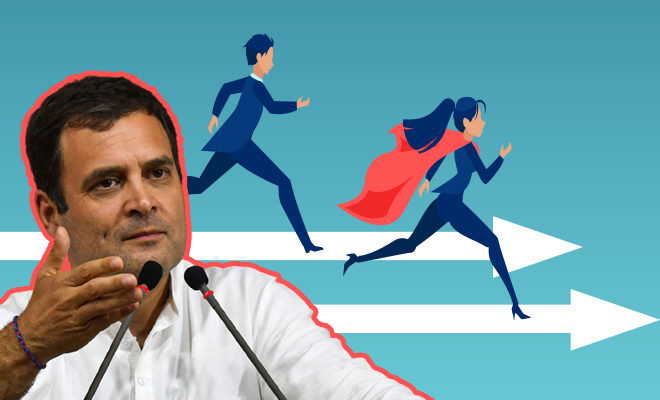 ‘Women Are More Powerful Than Men But Don’t Understand Their Own Power’: Rahul Gandhi

We’ve gotten so used to our politicians spewing rubbish about women that when someone says something remotely good, it’s difficult to hide our astonishment. By now we expect politicians to all to be like Uttrakhand CM Tirath Singh Rawat. You know the guy who has become infamous for dissing ripped jeans because now even women showing their bare knees is offensive somehow. This is why when we came across Rahul Gandhi talking about how women are more powerful than men, we were shocked. Well, pleasantly shocked. No matter what your personal politics dictate, you can’t disagree that what he said makes sense and other politicians need to be taught how not to be misogynistic.

While interacting with students of St Teresa’s College for women in Kochi, Congress Leader, Rahul Gandhi said that women are more powerful than men but don’t know how to wield that power. Well, of course, we don’t. Considering we have spent generations being classically conditioned to believe we are the weaker sex, I am just glad women are finally taking the time to understand their actual worth. Rahul Gandhi made this comment while disagreeing with a student who claimed that men and women were considered equal in society.

Rahul Gandhi said, “I will tell you a secret that men will never tell you. Women are much more powerful than men. They are fooling you. There is a problem. Women do not understand how their power works and where their power comes from. And that is the whole point of empowerment.”

While interacting with students of St Teresa's College for women in Kochi, the Congress MP said women are more powerful than men but they do not understand how their power works.#Congress #RahulGandhihttps://t.co/mpKiv2uuSf

Also Read: Rahul Gandhi Says He Thinks Women Should Be The Head Of The Household

According to reports, the Congress leader also displayed some useful skills that the girl students could use to defend themselves. He taught them a ‘principle’ from martial arts which would come in handy if they were ever under attack. After he imparted this self-defence lesson, Rahul Gandhi told them that women need to gather all their inner-strength because society is going to push them around.

He said, “Society is going to push you. I will be right blunt. Society treats you very badly in India. It insults you every single day. It doesn’t let you do what you want. It attacks you. So you have to gain strength from inside. For that, you have to understand the way you have been pushed, understand the forces that are hurting you and then position yourself properly.” Rahul Gandhi further said, “Society wants to convince you that you are less powerful. Don’t buy it.”

However, after saying all these interesting things, Rahul Gandhi topped it off by saying that once women do understand their complete power, they must not misuse it. He said, “Once you have realised that you are more powerful, then the tendency to misuse it also comes.”

Is it only me or does this statement have hints of misogyny? Has anyone ever told the men, who have been misusing their power since the beginning of time to not? First of all, we don’t have any actual power against the patriarchy and whatever little we do have, seemingly progressive men like Rahul Gandhi ensure we don’t “misuse”. Doesn’t that just bring us back to square one?

I really wish that more Indian politicians believed that women are powerful and understood the plight we face and actually worked towards helping us. After all, actions speak louder than words!

Rahul Gandhi Wants 10 Women CMs In The Next 10 Years!