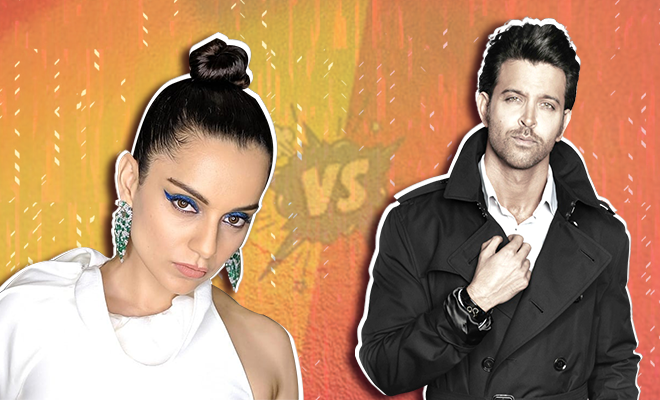 We Love Kangana Ranaut And How She Takes A Stand, But It Isn’t Fair If Hrithik Roshan Isn’t Allowed To Do The Same

They say, there are always three versions to the truth. What he said happened, what she said happened and well, what actually happened. And while we may never actually get to the part of knowing what exactly happened between these two Bollywood superstars – Hrithik Roshan and Kangana Ranaut, their he said-she said arguments just seem to have gotten worse over the years. More so since Kangana’s and Hrithik’s sisters Sunaina and Rangoli Chandel also took the liberty of dragging themselves into the mess.

ALSO READ: Unsuspecting Celebs Have Been At The Receiving End Of Rangoli Chandel’s Twitter Rants. Someone Log Her Out!

For the uninitiated, it started back when in an interview Kangana Ranaut resorted to calling Hrithik Roshan her ‘silly ex’ in 2016. This then disintegrated into a mudslinging match between the two actors who were last seen together in their movie Krrish 3. From throwing major shade to catty personal remarks during professional conferences, to issuing legal notices, a lot went down between the two.

Now, both the actors are waiting for the release of their respective films – Super 30 and Judgemental Hai kya – and as their luck would have it, there are chances that the dates would clash. Now for anyone who’s been in Bollywood for long enough knows that films clashing on the release date often leads to a divided business, the kind that leads to lost collections which doesn’t work well for either film. And when the feud is between Bollywood’s two star rivals, who can’t stand each other, things can only get uglier. Except, Hrithik Roshan tried to take the high road, but stumbled quite badly.

He went ahead to change the tentative release date for his film by claiming that the actress would definitely come after him. He said, “Also, being who I am, if I choose to confront as per laws, I become the aggressor. If I withdraw from a film-clash that I know has been pre-designed, then I become a ‘weakling penning a sob story’. I have learned to not get affected by either.” And even though we appreciate his attempt to let bygones be bygones, it wasn’t really nice or sweet. Quite the contrary. Because if you’re gonna make a public show out of it, you’re not really any better.

Except, while we do agree that no actress should take shit from a fellow actor in the industry, especially when it stems out of an alleged romantic relationship gone wrong, what Hrithik said next is something we couldn’t help but ponder over.

My decision my film…..so all brickbats directed to me pls! I’m my own person !!! https://t.co/xRLtAzzzXN

The actor later claimed that he can’t have a legal case against Kangana even if he wants to because apparently a girl can’t stalk a guy in India. He said, “To be honest, my only grouse is with those supposedly enlightened’ people who praise and often cheer this behaviour in the name of ‘new and refreshing audacity’, without any desire to be rational or truthful. They are the enablers who have allowed this circus to continue for six years. There is no legal case that I directly have with the lady (Kangana), and the reason I cannot have one is because apparently a guy cannot be stalked in India.”

And to be honest, we can’t disagree with him or the probability of it happening to him. As a feminist, I support the revolution that women are bringing about by calling out on people who wronged them, especially Kangana who has never minced her words. But it is also no surprise that there remain a few who have been misusing this, falsely accusing men because the law is in their favour.  The fact is, that he is perhaps right. Chances of a woman being a stalker, compared to a man, are dismissed at the first thought because we have been conditioned to not count that as a woman’s doing. And there are definitely women who do this, thereby doing a great disservice to women everywhere, and to real victims . And the fact that even a person as powerful and influential as Hrithik Roshan feels helpless, is rather a sorry state of affairs for the nation and men.

ALSO READ: Kangana Ranaut Is Embracing Sexy With Her Promotional Outfits And We Are Fans!

How much truth there is to any of their statements shall perhaps always be unknown, but their feud did open a very important dialogue and it is to address the fact that neither women nor men should feel helpless in the wake of strong movements that seek to empower women.  Our war has never been against the sexes, it has been against patriarchy. So, whether or not the Super 30 star had been stalked, he shouldn’t have to feel deprived of seeking help from the law, and for that, we feel for him.