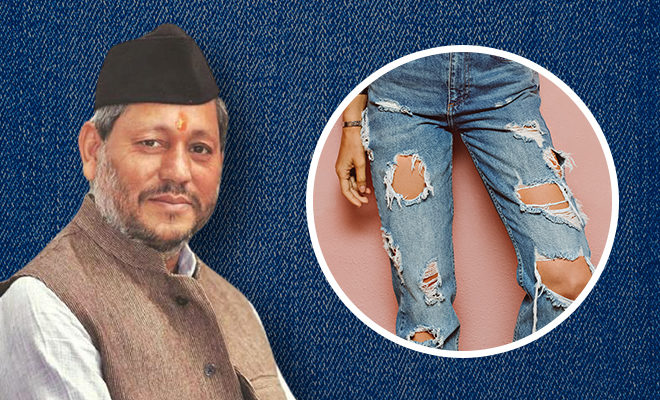 I am well aware that our country has a bunch of social problems. Most of them boil down to the rampant gender inequality that stems from the prevalent ‘men are sent from heaven’ mentality. And no matter how many laws are passed to protect women’s rights or government initiatives are put into place to boost women’s safety, nothing is going to change until that very biased mentality changes. Unfortunately for us, the people who have been elected to ensure our country has a better, brighter future is so wrapped up in their misogyny and so call ‘sanskaars’ that it’s physically impossible for them to say or do anything that would be considered even remotely progressive. For instance, recently the Chief Minister of Uttrakhand, Tirath Singh Rawat, said that he was shocked to see women in ripped jeans because apparently bare knees send a wrong message to society. The next thing these politicians will say is all women should wear gunny bags and walk around. But let me tell you something, even that won’t stop perverted men from sexually assaulting us. The problem lies with them, not with our clothes or behaviour. Why is this so difficult to understand?

On Tuesday, at a workshop organised by the Uttarakhand State Commission for Protection of Child Rights in Dehradun, the newly appointed Uttrakhand CM passed some very questionable comments about women wearing ripped jeans. He said that women who wear ripped jeans can’t create a good environment for children at home. I am a little confused. What are my jeans got to do with my parenting skills? Also, on what basis is he passing these extremely sexist and problematic comments?

Tirath Singh Rawat said that he was shocked to see a woman running an NGO in ripped jeans. He was worried about the message it sends to society and children. He said, “If this kind of woman goes out in the society to meet people and solve their problems, what kind of message are we giving out to society, to our kids? It all starts at home. What we do, our kids follow. A child who is taught the right culture at home, no matter how modern he becomes, will never fail in life.”

Also Read: This Politician Said That Torturing A Woman Is Not A Sign Of Manhood And We Need More Of This

The Uttarakhand CM further spoke about how children learn to show their “bare knees” because their mothers wear ripped jeans. And somehow this shows just how much we’re aping the west and running towards nudity. Oh not to mention, children who wear ripped jeans grow up and practice substance abuse. His logic is out of this world because I don’t understand it.

Tirath Singh Rawat said, “Kaynchi se sanskaar (culture by scissors) – showing bare knees, wearing ripped denim and looking like rich kids – these are the values being given now. Where is this coming from, if not at home? What is the fault of teachers or schools? Where am I taking my son, showing his knees and in tattered jeans? Girls are no less, showing their knees. Is this good? All of this, in a mad race of westernisation. While the western world follows us, doing yoga … covering their body properly. And we run towards nudity.”
Why can’t our politicians acknowledge that women covering their body is not the solution? Ripped jeans don’t symbolize us running towards nudity. They don’t symbolize the values we pass on to our children. They’re just jeans. Besides, if you want to talk about giving the right values to your children why don’t you address the fact we need to teach our sons to respect women? Ripped jeans or not. No one will do that because that means holding the men accountable for their perverse actions.

"Shocked to see women in ripped jeans, what message are they sending to the society" – Tirath Singh Rawat in a viral video pic.twitter.com/HdB4oz66j0

Anyway, if you thought that this man is overly sexist wait until you hear what one of his newly appointed ministers had to say. Doubling down on the tone-deaf and problematic comments, Ganesh Joshi said that women must prioritise raising good children. He said, “Women talk about all things they want to do in life, but the most important thing for them is to look after their family and children.”

It’s not enough that women are now heading companies and earning accolades in practically every profession. Men are still consumed with the fact that all women are supposed to do is raise children and take care of their families. Are we ever going to let go if this misogynistic mentality that is designed to put women down?

I am sick of Indian politicians making such overtly sexist statements. How are we ever going to move forward if the people responsible for our growth refuse to let go of this archaic and problematic mentality?