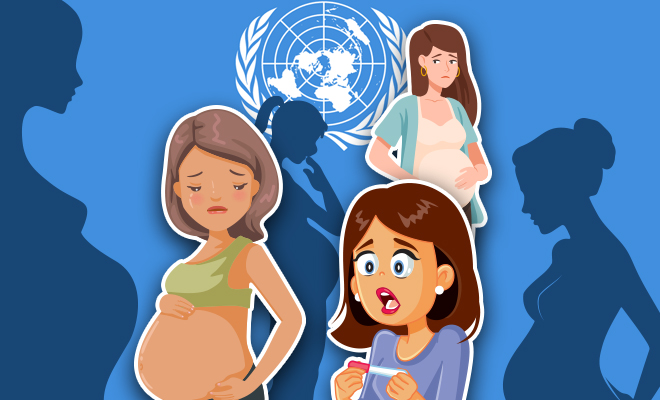 UN Secretary-General Says Disruptions In Healthcare Services Could Lead To 7 Million Unplanned Pregnancies. This Should Worry All Of Us

Two days ago, on July 11, 2020, we celebrated World Population Day. It feels odd using the word ‘celebrated’, since a sizeable chunk of the planet’s population is under the Coronavirus threat. But if the virus has done one thing, it has in several ways aggravated the issues that half of the world’s human population already faces. Women are not only losing out on the already limited opportunities for education and work that they had, but the lockdown has worsened their existing living conditions with rising cases of gender-based violence and abuse, and a retracted focus on women’s reproductive health. This is why the theme for World Population Day 2020 was “How to safeguard the health and rights of women and girls now?”.

In times of crisis, protecting sexual and reproductive health and rights is imperative.

This #WorldPopulationDay, see why we must safeguard the health and rights of women and girls, especially during the #COVID19 pandemic: https://t.co/anzRJqfVEB#WPD2020 pic.twitter.com/Jx7bBOxoDk

In his annual address on the occasion, United Nations Secretary-General Antonio Guterres urged world citizens to work towards protecting the health and rights of women, now more than ever.

“Every year, millions of girls are subjected to practices that harm them physically and emotionally, robbing them of their right to reach their full potential. Lockdowns stemming from the pandemic are expected to make matters even worse. With many countries on lockdown and health systems struggling to cope, sexual and reproductive health services are being sidelined and gender-based violence is on the rise.”

Also Read: A Depraved Man Burnt His Girlfriend’s Face Using A Sanitiser Because His Ego Was Hurt. Is There No End To Toxic Masculinity?

According to estimated projections by the United Nations Population Fund (UNFPA), if the lockdown measures continue for six months with major disruptions to health services, it could result in 47 million women in low- and middle-income countries being unable to access modern contraceptives. This, in turn, could result in 7 million unplanned pregnancies.

The UNFPA also projected that some 4 million girls could be subjected to female genital mutilation and 12 million would be forced into marriage this year, as their academic prospects also become uncertain in the lockdown.

In addition, there is the sharp incline in the number of violence and abuse cases against women, with the possibility of 31 million additional cases. With the limited space for movement, and rising household tensions due to health and financial stress, women are often left to bear the brunt of the men’s anger, with no escape. Many are holed up with their abusive spouses with nowhere to go. And if that’s not enough, the cases of cyber violence and bullying have also increased, exacerbating an already festering problem. Over-the-phone guidance and counselling might not be enough to ameliorate the issues women are facing during the lockdown.

With the current stats, one of the biggest fears expressed by Guterres could well indeed come true—years of progress made in the field of women’s health, safety and education could be reversed.

Also Read: Mithali Raj Said COVID-19 Has Set Women’s Cricket In India Back By Few Years. Women In Sports Should Get Equal Opportunities

In a 2012 UNAIDS discussion paper that talks about the gender inequalities during the economic crisis, it suggested that women are often likely to bear the brunt of reduced resources.

“During times of economic crisis, global gender inequalities mean that women and girls, particularly in low-income countries, are more likely to be taken out of school, are the first to reduce the quantity or quality of the food they eat or to forgo essential medicines, and are more likely to sell sex in order to survive.. This negatively impacts on women’s health and the gains that have been made in girls’ education, undoing the progress that has been made towards achieving the Millennium Development Goals (MDGs).”

While this quote might’ve been written in the wake of the 2008 recession that impacted more male-driven industries, the coronavirus pandemic has brought about ‘pink collar recession’ a term being used to describe how soft industries that employ women more are some of the worst hit this time.

Also Read: Women Are More Likely To Lose Their Jobs During This Pandemic And Will Probably Not Get Rehired Due To Gender Biases. It’s Going To Be Tough For Us

With these terrifying estimates before us, there could’ve been no better call for action for World Population Day 2020. We’re staring directly at the catastrophic effects of over-population—death, disease, despair, extinction and climate change. And the only way to keep it in check, and not make the situation worse, is to focus extensively on women’s safety, health, sex education and welfare. Regression is NOT an option!