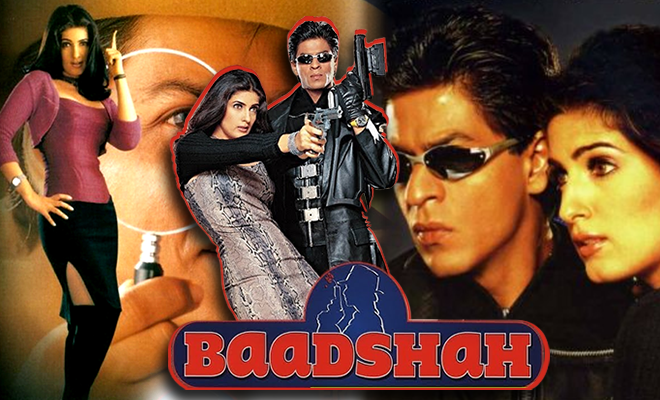 Twinkle Khanna Shared A Hilarious Review Of Baadshah. 20 Years Later, This Movie Still Cracks Us Up!

If you’ve grown up in the 90s and 2000s, I’d say all of us are a lucky bunch. We grew up consuming content that was part adorable, part hilarious. Even the movies that were not meant to be comedies, such as Mujhse Dosti Karoge! and Hum Saath-Saath Hai. I am not saying the comedy movies today aren’t good. But what I am saying here is that the comic element in the movies back then was so original that after decades, it still sits snugly in our memories. If someone tells me they don’t remember Andaz Apna Apna, dialogue by dialogue, I would really question their childhood. And brains. And while the Shah Rukh Khan and Twinkle Khanna starrer Baadshah didn’t happen to have a cult following of this kind, it’s the kind of comedy movie that beautifully tugs at our imagination, even today. So today, when the movie completed 20 years, I absolutely had to revisit it. Also, because it’s Tuesday and we could use a little bit of pepping up!

In fact, Twinkle shared a review someone had posted on Instagram. It was hilarious but kinda mean too. They credited her performance to her navel, which was visible throughout the movie. But then you’re the one so distracted by a woman’s navel that you missed the plot, so it’s not her fault! Anyway, Twinkle being Twinkle, added her witty comment on this and don’t we all love her for that? She wrote: “Did I say I never got good reviews? I apparently did with the support of an emotive body part! Have to say that 20 years on and the Baadshah couple still have it – SRK still has his dimples and I still have that fine navel:) Thank you sending this and brightening up my morning @manishmalhotra05 #navelgrazing”

We love the cheekiness and despite this very messed up review, I am glad that this movie is still remembered, because I trip on it every time it’s on TV. In fact, now I may try to look it up on one of the video streaming platforms and watch it during the weekend.

So when I started writing about this movie today, I went on YouTube and looked up funny scenes from the movie. Remember the scene when Shah Rukh Khan is getting his fake eye surgery done? The way the entire gang quickly transform the space into something totally different is hilarious. The same space becomes Shah Rukh’s house, his high-tech detective agency’s office and even a hospital!

ALSO READ: Mujhse Dosti Karoge Completed 17 Years Today. And We Take You Through The Storyline. It’s So Bad!

Even in the second half when he gets mistaken for a CBI officer gave me so many laughs. Do you remember the super functional, technologically advanced car that he gets? That can make Iron Man want to hire these people! Okay, that’s a bit much – but it was too funny! Even the X-ray glasses that can make you see through people’s clothing! I am definitely going to watch this movie this Saturday.

Salman Khan Asked Sonakshi Sinha To Lose Weight Because He Wanted To Cast Her In Dabangg. Okay Then!