#Trending : Women Share All The Unrealistic Expectations People Had From Them During An Arranged Marriage Proposal. You’ve To Read It To Believe It 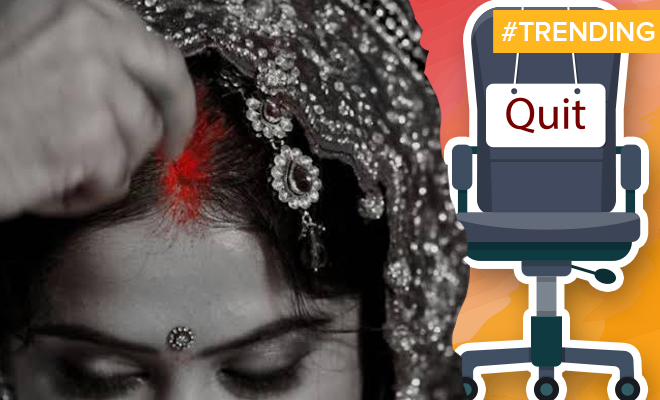 The other day while cooking food in the kitchen and I burned my arm because I am a noob, and I was surprised that more than the stingy burn, what was more irksome was the fact that my mother reprimanded me for getting a scar on myself ‘before marriage’.  You see, Indian parents, as much liberal as they may be, still believe that girls who get married have to succumb to certain expectations, all of which are knee deep in patriarchal notions. We are either supposed to make the kitchen our entire world, or bear children to take the family name further or just sit at home like a trophy wife, saying goodbye to all our hopes and dreams, or at times magically turn a shade lighter too.

As we all binge on the the latest reality TV show, Indian matchmaking, really outing the reality of Indian society as much as Indian aunties, several women who have been at the receiving end of such arranged marriage conundrums have come forward to share their bizarre experiences during match-making. While we agree, not all families who choose arranged marriage are as back-dated and misogynist as the ones we’ve seen on reel, but the ones who are, surely hold a larger influence than the ones who aren’t.

Talking about all the things they were expected to do or live as post marriage, we were stumped at just how easily people have doled out their expectations as though it is no more than a job application for the most sanskaari bahu. Here are some of the most mind-boggling ones, we didn’t know whether to cringe or laugh at –

"I wake up at 5 am daily to perform puja. Don’t expect you to follow this, but since I head to work at 8 am, it would help if you could wake up with me and get breakfast and my work clothes ready.”

"I wake up at 5 am daily to perform puja. Don’t expect you to follow this, but since I head to work at 8 am, it would help if you could wake up with me and get breakfast and my work clothes ready.”

In another case I was asked to leave job and shift because that is what the sister-in-law did she got married to the guys elder brother. And obviously the guy cannot move out for job in a metro city

In another case, the guys family stopped the discussion when I said I would financially support my family even after marriage.

😂one of the 'matches' was a senior VP at some MNC bank.
he wanted a wife who knew how to host parties.
I didn't have the heart to tell him that i preferred quarter bars (in that era) 😀

Now I’d be lying if I said all of these things expected from a daughter-in-law are just an exaggeration, because they are not. Our own mothers, and in a lot of less talked about cases, our own friends have sometime or the other fallen victim to this oppressive and patriarchal mentality where the wife is the only one who needs to adjust, while her husband and in laws keep laying down unrealistic standards for her to meet. Seems like the lack of dowry has now been compensated with such ideals.

But it is now that tables need to turn and people need to realise, including us women, that gone are the times when we lived at the beck and call of our husbands. We are our own person, we earn our own living, live our own life and are equals in every way, which only makes it natural to demand an equal say in things. The man is no longer the only one who keeps a household’s finances running, and so a woman shouldn’t be the only one picking up a belan in her hand in the kitchen. We are more educated, capable and aware, and those who can’t deal with it, can respectfully take their wedding expectations and shove it where the sun doesn’t shine.

Because in this era, it is going to be women who run the world.