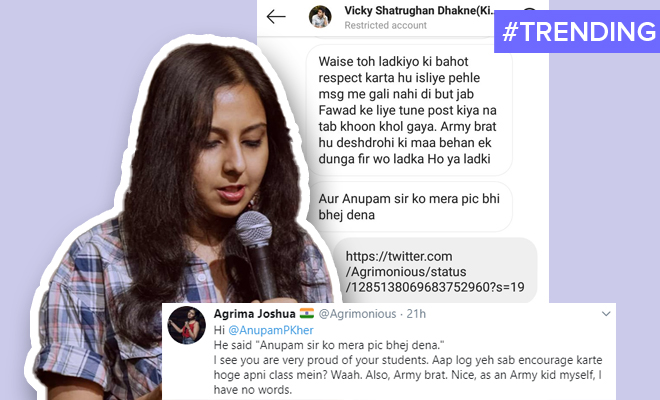 #Trending: Comedian Agrima Joshua Has Called Out One Of Anupam Kher’s Students For Sending Her Abusive Messages. This Online Trolling Is One Getting Worse

I have always thought stand-up comedy is one of the toughest professions out there. Just think about it, would you be able to get up on that stage night after night trying to make people laugh? I freak out just thinking about that. But that’s not why I say it’s one of the toughest professions. You see, India is a country with a lot of good qualities and taking a joke is not one of them. It’s true, Indians are super sensitive and touchy about more topics than not. And God forbid if you put one toe out of line, it’s complete mayhem.

Don’t believe me? Ask Agrima Joshua whose one-year-old joke about Chattrapati Shivaji Maharaj’s statue being built in the Arabian Sea triggered people into abusing her massively online. One person, Shubham Mishra was even arrested for making a video wherein he threatened to rape not only her but harm all the women in her family. Of course, everything boils down to sexual violence, doesn’t it? He went into such detail about what he planned to do that it sent shocks down my spine. That video was so vile and disgusting that left me dumbfounded.

He was arrested for this but as it turns out when you cut off one head of the online-bullying snake, three grow in its place. You see, earlier today Agrima took to Twitter to share screenshots of abusive messages she has been receiving from one of Anupam Kher’s students, Vicky Dhakne.

The thread begins with Agrima tagging Anupam Kher and writing, “Hi @AnupamPKher. Great to see your students learning the right values in your “Actor Prepares” workshop. :)”

She goes on to share a screenshot of the messages she received where the man is abusing her using words that will make your blood boil. He insults her religion and basically asks her to go to Pakistan. Agrima also shares a picture of his Instagram profile.

This is just one of the ten thousands of messages I've been getting. Arrests don't fix the mentality of our world. But I just thought maybe Mister Kher would be happy to know of the extracurricular activities of his disciples.

Next, she goes on to write, “This is just one of the ten thousands of messages I’ve been getting. Arrests don’t fix the mentality of our world. But I just thought maybe Mister Kher would be happy to know of the extracurricular activities of his disciples.”

She has an excellent point. Even if we get every last bully out there arrested we won’t be able to change the mentality of our society. It’s the same mentality that tells a person to randomly threaten a woman with rape and murder if she does something that doesn’t sit well with them. The same mentality that led this man, Vicky, to abuse Agrima with no rhyme or reason.

Agrima, in her next tweet, says, “Hi @AnupamPKher He said “Anupam sir ko mera pic bhej dena.” I see you are very proud of your students. Aap log yeh sab encourage karte hoge apni class mein? Waah. Also, Army brat. Nice, as an Army kid myself, I have no words.”

Further adding, “These same ‘Army brat’ guys will cry mummy if they had to face one-hundredth of what my dad and other Army folks do in Academy also.” And, “Imagine being an adult and your whole personality is your dad’s career.”

This is why you have to love comedians. They will put a brilliant snarky twist on anything. I just don’t understand what that man is trying to prove. It’s one thing to not find a joke funny and it’s another thing to DM the comedian and abuse her and her entire family. That is seriously deranged and messed up.

This keeps getting funnier. pic.twitter.com/uQTIbZZy42

The next tweet of Agrima’s on this thread reads, “This just keeps getting funnier”. It’s another screenshot of the message where Vicky thanked her for a Twitter shoutout. Does he think he is coming off as the good guy in this?

Agrima concludes this thread by saying, “I don’t know sir, Fawad Khan has sent me ZERO ‘ma behen‘ threats so maybe that’s why I like him more than I’ll ever like you in my life.”

As a comedian, it’s Agrima’s job to make a joke out of things like this. But it’s no laughing matter. In fact, whoever this guy is, he needs to know how to talk to people. Is this really the price women have to pay to have opinions and exercise their freedom of speech? Getting videos made of how a man is going to rape you and having people flood your inbox with abusive messages? Why are women with voices getting persecuted like this? It’s fucked up.

Cyberbullying has become a very serious issue and it’s only getting worse. Rape and murder threats are being doled out at the drop of a hat. People just assume that they can threaten and abuse any woman for just about anything. I just keep thinking of how much pure hatred these men must harbour within themselves. Rape is a tragic reality of our society, it’s not the solution to anything.

This is heinous, disgusting and some real action needs to be taken.

Female Comedians Apologised For Being Funny, Being Women And Being Alive. Because Men Take Offense To Us Breathing