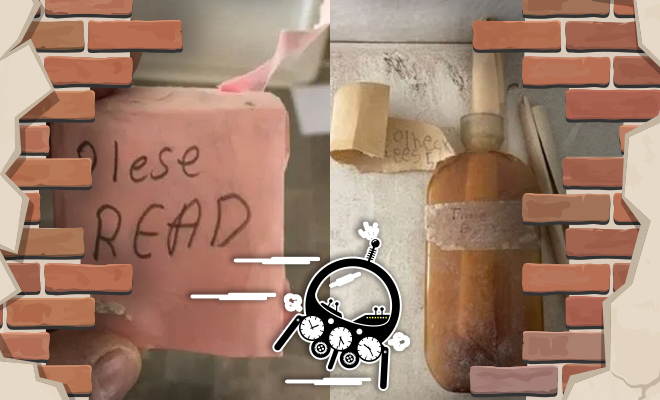 This Woman Found Notes She And Her Brothers Hid In The Walls Of Their Home 30 Years Ago. This Is So Cute

There are some things we associate with such beautiful memories, and we try to keep them for as long as we can. Even the silliest little trinkets can evoke feelings of strong attachment, simply because of what they represent. Nostalgia is a strong emotion. And now that we’ve all been locked inside our homes and hit by a new wave of bad news every week, it might be a good idea to look back on the simpler times. Childhood memories are even more fun to think about. You might remember something embarrassing you said, or something adorable you did that was luckily caught on videotape for you to watch years later.

This woman recently discovered a fond memory from her childhood, and it brought tears to her eyes. Kimberly Colbeck found a note that she and her siblings had written as children. In 1987, when Kimberly was just three years old and her brother Andrew and Christopher were twelve and eight respectively, they had created a time capsule. They had written out the notes and hid them behind the walls of their house in Leeds. 30 years later, they were chanced upon by the builders renovating the house.

Woman in tears after builders find secret notes hidden in walls of her old house from 30 years ago https://t.co/ewDWHpLL6d

The notes brought back memories of Andrew, who unfortunately is no more. “I cried when I first saw the note. My older brother Andrew sadly passed away two years ago. It was really emotional to see his writing,” Kimberly said.

ALSO READ: This Married Couple Realised They Had Spent An Entire Summer Holiday Together As Kids. Here’s Their Story Of Chance Encounters And A Fairytale Romance.

Her late uncle had been fitting a new kitchen when she and her brothers hid the papers behind the tiles. No wonder they stayed perfectly hidden for 30 years! One of the notes was rolled up and put into a small glass bottle. “This note was left by Andrew Colbeck age 12, Christopher Colbeck age 8, Kimberl Colbeck age 3 on the 28/7/1987,” read one.

The Colbeck family has been living in Castleford ever since they left the house in 2013. When Kimberly found out that Darren Moon, a joiner, had found her notes, she arranged a meeting with him.

“That house was a massive part of my life. Hopefully, I can show my dad, who actually placed the notes for us when were kids. He is currently suffering from dementia,” Kimberly said.

We’re glad that Darren contacted Kimberly on finding the notes, or she wouldn’t have been able to relive those memories!

ALSO READ: A Man Planned His Anniversary Celebration For His Wife Before He Passed Away. He Even Sent A Scheduled Email To His Daughter To Make It Happen.