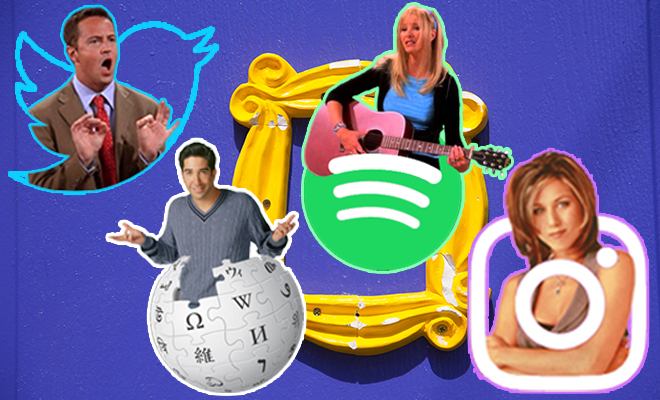 This Twitter Thread Compared FRIENDS Characters To Social Networking Apps And It’s So On Point.

There are some things in life that just stay with you and though these things vary from person to person, FRIENDS is something that has touched millions of lives. Being the quintessential 90’s kid, I have actually grown up watching Rachel, Ross, Pheobe, Monica, Chandler and Joey drink coffee in Central Perk. And you know what, they were always there for me even when it wasn’t my day or my week or my month even my year (even when they were on a break). Every basic thing about friendship, love, sarcasm and dating that I know, I know because of the show. Hell, it taught me to not chase useless boys and find my lobster!

Though FRIENDS went off the air in 2004, it is, even today one of the most-watched TV shows. It has millions of fans that know every dialogue and every scene by heart (I am a proud member of that group). I have always wanted to live the FRIENDS life, but that is not realistic, is it? It’s so funny though to think that so many people who weren’t even born in that era, relate to it so much.

By now I am sure you’ll have guessed that I am a huge FRIENDS fan and the fact that you are reading this, tells me you are too. So, the reason I am talking about this show so much right now is that I recently came across a Twitter thread that re-imagined all the FRIENDS as apps that we normally use on our phones. This is a little embarrassing, but I can’t tell you how many times the subject of daydreaming has been- what would FRIENDS look like if it was made in the era of social media.

Look, it’s not a moo point, okay? It’s a very fascinating subject and that is why this thread really amused me. And the best part is whoever made this thread has actually put a lot of thought and imagination into it.

Also Read: This Twitter Thread Of Alia Bhatt’s Wardrobe Choices Being Compared To Doughnuts Is All The Entertainment You Will Need Today

a thread of Friends characters as apps ~ pic.twitter.com/jk2SRe3EmC

This is a no brainer. Chandler was the only one with incomparable wit and an amazing ability to turn a phrase and wasn’t Twitter essentially created for people like him? You have to admit if Chandler was still on TV today, he would be super active on Twitter. Every day his followers would get a, “could this be any more annoying” tweet. Out of the six of them, only he could send out a strong message using a few but very amusing/sarcastic words.

When Jennifer Anniston joined Instagram, it literally broke the internet. I can only imagine what would’ve happened if Rachel joined. I can totally picture her as an Instagram influencer with millions of followers just dying to see what hairstyle she comes up with next. Every time I watch any episode of FRIENDS, the first thing I want to do is to rummage through Rachel’s closet and get the number of her hairstylist. And come on, what is Instagram if not a digital world for trendsetters?

Where do you go when you need ideas for a gift or how to organise or even start a craft project? Pinterest, obviously. Now, who do the FRIENDS go to for ideas and help when they want to organize or well, fool people into believing they are circumcised- I laughed so hard when it fell though – Monica. From her aesthetic cooking skills to always having a ribbon drawer, everything about Monica screams Pinterest. You can almost hear her (shrill) voice said, “I know”.

Come on, it’s not that hard to imagine Dr Ross Geller (not a real doctor) as an online encyclopedia. From correcting the group’s grammar to always having “fun facts” about the most boring things ever, Ross is he place to go for muft ka gyan. He couldn’t stand being wrong (remember the whole evolution thing?) He watches documentaries about Ukraine and does puzzles for fun. He is definitely Wikipedia.

Being on the receiving end of Joey’s infamous catchphrase, “How you doin” can make any women squeal like a 13-year-old girl. I don’t think there is a better comparison for Joey than Tinder for his playboy ways laid the foundation. Besides, I think if he was an actual person alive today, he would be the most flippant of the dating apps world.

Of course, Phoebe is being imagined as a music app. I mean, have you heard Smelly Cat? It’s an iconic song. Agreed, Phoebe’s ditzy character wasn’t the best singer, but her songs really deserved their own category on Spotify. Do you remember the Christmas song she sang using all their names? She really was a talented singer in her own special way.

The Twitter thread even features some of the supporting characters:

Netizens are going gaga over this thread and why shouldn’t they? As I said, these apps describe the characters so perfectly. I only wish the FRIENDS reunion that they are making includes how their lives would be in the digital era.

That being said, how excited are you for the FRIENDS reunion?

This Netizen Imagined All Of Rihanna’s OTT Outfits As Indian Snacks. His Twitter Thread Is The Funniest Thing You Will See