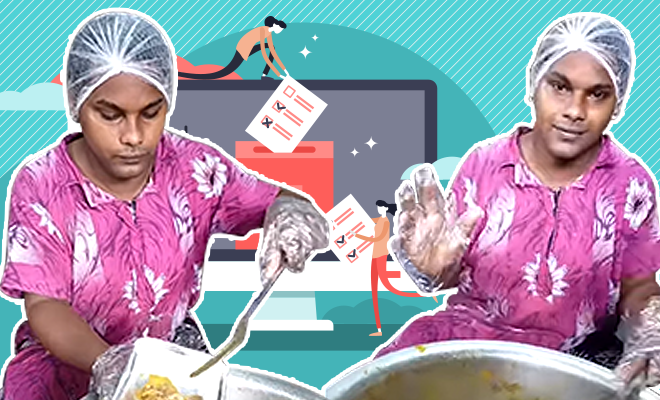 While most of us are complaining about the horrors of our work from home situation, there are people out there who have lost their livelihoods and are struggling to keep their head above the water. Just earlier this month we witnessed the painstaking efforts social media made to help out the elderly couple who ran Baba Ka Dhaba in Delhi. Heartwarming wasn’t it? Today though, we are talking about yet another local eatery who in dire need of help. You see this Biryani stall in Kochi is run by a transgender woman who lost her job because of the pandemic. She is being harassed and pushed out of the business by a group of men who are also street vendors.

Sajana Shaji is a transgender woman who was working in the online food delivery sector before losing her job due to the pandemic. With no source of income, she decided to sell biryani on the road in Kochi. Since she already possessed a license for food sales from the Food Safety and Standards Authority of India, it was convenient. However, she was harassed and verbally abused for trying to venture into this business. With no one coming to her aid, not even the police after filing several complaints, Sanjana decided to take her problems to social media. She made several Facebook live videos detailing everything she has been going through to make ends meet.

In the video, she explained, “We launched the biriyani sale three months back and was doing good business. The food vending was the only means of living for five of us, four trans women and one trans man. But, issues started one month ago when a group of men, who are engaged in street vending near our mobile cart, started badmouthing on us and on our food.”

Further adding, “They regularly insulted us and propagated that our food products are of substandard quality. This adversely impacted our business and we could not even sell 50 food packets and failed to pay the groceries bill. We have been tolerating the insult for nearly a month. With no one to help, I decided to reveal our miserable situation through a Facebook live video that went viral. I am grateful to all those who promised to support us.”

I have never understood how people can’t abide by the basic principle of ‘live and let live’. Those men, who started harassing Sanjana were obviously threatened by how well her stall was doing. So did they tried to intimidate her by verbally abusing her and talking her stall down which severely hampered her business. The worst part is, the police knew and did not care. We aren’t surprised. We live in a country where the police will cremate the body of a rape victim, so these things cease to surprise us now.

Also Read: A 94-Year-Old Woman Reunited With Her Family Thanks To Google And WhatsApp, Forty Years After She Disappeared. This Is Heart-Warming

Health Minister has spoken to her and assured help. Actor Jayasurya has also come forward with offer to help. https://t.co/hbtPcPX96g

However, what happened after Sanjana made all those Facebook live videos really brightened our day. Just like Baba Ka Dhaba, social media played catalyst and there was an outpour of love and support. Not only from netizens but some prominent politicians and celebrities as well. Even the state health minister KK Shailaja came out to support Sanjana.

As part of the We Care project of the Kerala Social Security Mission, Kerala’s health minister KK Shailaja promised Sajana immediate financial assistance and police protection to continue her biryani business. The minister said, “Transgender persons have equal rights like other citizens. No one will be allowed to harass them.”

This is truly amazing. Finally, a politician who sees things the right way. Helping the trans community in our country should be a priority. We are glad Sanjana is getting the aid she requires. Meanwhile, the Thripunithura police arrested 48-year-old Girish of Eroor under the provisions of the Transgender Persons Protection of Rights Act. He was also charged with assault and use of abusive words against the complainant.

This again proves that social media is not all bad. It’s not all useless dramas and trolls. People want to help others. The support and love that Sanjana, a transgender woman, received are really overwhelming. We are so glad social media is being used in this way. These local businesses that have been trampled over by the pandemic need our help and attention. Especially the ones that run by that trans community. I am glad to see people coming to together to support others.

This 50-Year-Old Woman Stood On A Waterlogged Road Under The Pouring Rain For 5 Hours To Warn Commuters About An Open Manhole. Wow!