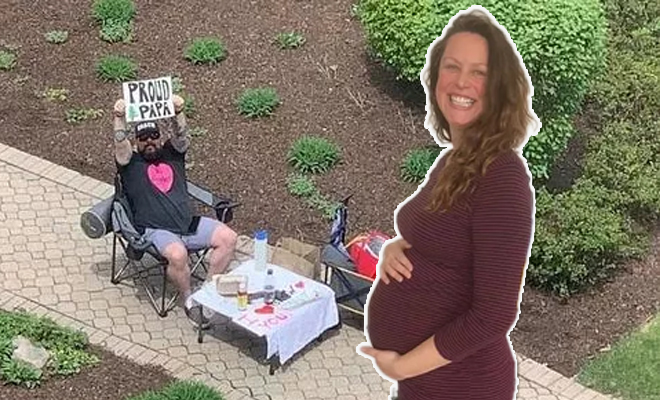 This Man Couldn’t Meet His Pregnant Wife Due To Covid 19 Restrictions So He Set Up A Dinner Date Outside Her Hospital Window!

I am a 24-year-old  woman, quarantined with my healthy family, with a job that is enriching in every sense and a boyfriend that is safe but locked down seven seas apart in a different country. Most would say I am in a pretty ideal space. I know but I continue to complain and find reasons to whine about, okay? And to think that there are people in far more complicated situations than I am, still making the very most of what they have is making me rethink my complaints. I say this because a man named Robert Conlin made the sweetest gesture for his pregnant wife, as the two were kept apart due to Coronavirus restrictions.

With his wife Shona Moeller 28 weeks pregnant and admitted into a hospital after her water broke prematurely after 20 weeks, she was to stay in hospital and they both knew that. But after the restrictions imposed due to the Coronavirus scare, her husband Robert hasn’t been allowed to go see her. However, even that didn’t stop the soon to-be father from going the extra mile and making  his wife feel special.

Taking the idea of a virtual date night up a notch, Robert came up with the idea of setting up for a proper date night four floors down from the hospital on the sidewalk, visible from the window of his wife. Decorated with flowers, candles and placards that read the most cutest things like ‘Proud Papa’, the guy didn’t just win brownie points with his pregnant wife but also from us and the internet.

Also Read : Two Parkour Athletes From Iran Get Arrested For Posting A Picture Of Them Kissing On A Rooftop. Is That Really A Crime?

He shared how he started hosting such date nights once every week to try and make her wife feel as normal as he could from a distance during such a time. He told ABC News that, “We ask each other on dates all the time still and the first time I came [to the hospital] as a date night, I asked her the same thing, ‘Do you want to go on a dinner date with me?’ She thought we were just going to do it over FaceTime so when I showed up, she was really surprised.” As were we, tbh.

He then further shared how, “Shona and I have been married almost three years and date night is something we always did anyway. And it seemed like this would be a way to keep the tradition going and still connect and be with each other. I wanted her to feel special and loved. She’s in there by herself and she can’t even leave her room. She’s going to be there, we’re hoping for just three months. We’re halfway there.”

Talking about how Shona was thrilled the first time she saw her husband make that kind of an effort for her, she said, “In this time where I’m by myself, every gesture feels so monumental and lovely and sweet. It felt like he had traveled the world to come see me because it meant so much.” Considering how tough the times are to navigate through now, we totally understand where she is coming from. It is heartening to see that there are people out there who would go above and beyond for the people they love.

Also Read : Major Suman Gawani Is The First Indian Woman Peacekeeper To Be Awarded The United Nations Military Gender Advocate of the Year. This Is Amazing