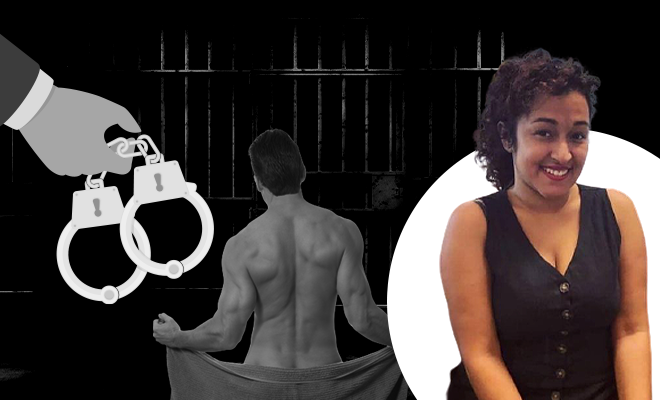 This Girl From Bangalore Got A Man Arrested For Flashing Her. Women Need To Do This More

Living in a metropolitan city like Mumbai or Bangalore comes with strings attached. Every time I step out of the house, which is rarely now thanks to the coronavirus, I am gripped with anxiety. When you do what I do, you’re constantly hearing stories of women being raped, molested, catcalled, eve-teased and groped on the road. Another very common occurrence is men flashing their junk at you. It’s very creepy but this has happened to more women than I can count. And no matter how many times we approach the police, this is just not a crime that is taken seriously. However, today we are discussing the story of a girl who, after getting flashed at, managed to get the man responsible arrested. She is a freaking hero!

Let me tell you her story from the beginning. On 8th November, Nupur Saraswat, a resident of Bangalore, took to Instagram to reach out for help. You see, a man who lives two blocks away from her apartment flashed her. Even though he stays at a little distance, Nupur got a clear view from her window. This is so disgusting. Why do men do this? What the hell is the point of traumatizing women like this?

While narrating this incident, Nupur said that the man stood there for an hour making her all the more uncomfortable. After she yelled out abuses to him, the man gave her a disgusting smile and pulled down his pants. He stood there, flashing her, even after Nupur threatened to take pictures of him.

Nupur said, “I moved into this apartment one month ago. His house is not very far from mine. He stood there staring at me for an hour, which made me very uncomfortable. The first thought in my head was to not stay silent. The second thought was of fear because he knew which building I was living in. So, I yelled at him and used abusive words. Immediately, his pants dropped and he gave me a disgusting smile while he held his penis at me. I threatened to take pictures of him, and when I brought out my camera, he pulled them back up and stood there watching me!”

UPDATE: this man has been arrested. I want to thank all the NGOs, friends , and friends of friends who poured in with sound advice. Asking for help/ Recourse/ Bangalore/ Koramangala: I’ve lived in this house for over one month now. And I’ve never seen this man before. His distance/ view of my terrace is in the forth slide. He waited there for hours looking at me which made me uneasy but not to an extent that I needed to ask him to fuck off. Then at a point when he knew I was looking, he pulled his pants down and held his penis at me. Smiling that FUCKING smile. He is two, TWO buildings away from me. I live alone in the terrace house. I have informed my landlords. The next step is to figure out a way to get legal help. Is flashing an offence in India? Is there a helpline I can call? And how do I make sure that something happens and I am not left in a position where this person a) knows I have reported him b) is scot-free. The last picture is of me. Before this. Before I realized that I was about to feel v,v threatened in a house I have come to love. Before I would be shaking in anger and embarrassment (????) and second guessing if it is my solitude that provoked him or my outfit. I could SCREAM right now but I want to channel my anger in a tactical way. So if YOU can help me, please DM me

Just the thought of this is making my skin crawl. Flashing is not an uncommon occurrence. I have been flashed too by a rickshawala while I was on my way home from college. It was hands down, one of the most disgusting moments of my life. Of course, not to mention, it left a permanent scar. However, a lot of women, like myself, don’t report these incidents. Though we should. I didn’t report it because I was too much in shock to register what had happened and obviously did not want to relive it. However, Nupur did the right thing, called the police and got the pervert arrested for flashing her.

First, Nupur was sceptical about calling the police so she tried to get assistance from women’s helplines. She called Vanitha Sahayavani, 1091, and National Commission For Women (NCW) but they were not reachable. Oh, that’s nice to know. Then she called her landlords, who encouraged her to call the police.

After alerting the police, Nupur shared her traumatic experience with social media in the hopes to get help from friends, activists, NGOs and lawyers.

Her social media post started with the question we have all been asking- “Is flashing an offence in India?”. She got responses from legal experts and activists who told her that it was a punishable offence to flash a woman in public. While a lot of people told her how to go about the situation, a lot of women came forward and narrated their own experiences where perverts have flashed them. As more and more women shared their own traumatic stories, Nupur realised that they stayed quiet because they didn’t know what to do about it. Surprisingly though, there was also a section of people who asked her to ignore this and walk away. But Nupur was determined to ensure that leech man lands in jail.

Also Read: In Delhi, A Man Flashes His Private Parts At A Woman In Delhi Metro. Unfortunately, This Isn’t The First Time, And Not The LAst

💥Custom illustrated poster for @OurStreetsNow against Public Street Harassment. Available in A5 and A3! 😊⁠ ⁠ If you guys didn’t know, I’m also the head of design at Our Streets now! We’ve been working on new merchandise for a while and we’re so excited to announce the launch of Our Streets Shop on the 18th of October! All profits will go towards the campaign, helping us fund events, research, equipment, travel and much more!⁠ ⁠ Our Streets Now is a campaign striving to end public sexual harassment (PSH) both through cultural and legislative change. Public sexual harassment is unwanted sexual attention by strangers in public spaces such as gyms, bars, parks and the streets. PSH can be leering, unwanted comments, beeping from passing vehicles and even following. ⁠ ❤️⁠ This campaign is fuelled by the huge variation of testimonies, your stories push the campaign forward and show the damage this violence does to our mental health. You can find out more in the website in our bio!⁠ 🌟⁠ ⁠

Nupur said, “While the law is still in a grey area (over such cases), I wanted to raise my voice against the accused and get him the punishment he deserved. So, I called the police and on 9 November. From Koramangala police station I was connected to the Viveknagar station. The man was identified and arrested. I was also escorted to the station for filing my complaint.”

Soon, more people in the neighbourhood heard of the traumatic experience Nupur had endured.  She said, “A lady in my building approached me about how her 15-year-old daughter was also flashed by the same man. After she informed her mother of what happened, the two of them have stopped going on to the terrace, fearing that man.”

The next day, Nupur was informed by the police that they would have to let him go with a warning. She then reached out to a lawyer but after realising what a long and tedious procedure this would be, Nupur decided to drop it.

However, she stresses on the fact that no one should keep quiet after being harassed or flashed. Perverted men, like the accused man here, need to be held responsible for their disgusting actions. She said, “The most important lesson I learned from what happened in the last two days is to never stay silent. If you are being harassed, raise your voice, let others know and seek help. And even though he is being released, his landlord informed me that he will be evicted from his residence by the end of this week.”

Nupur’s fight against her flasher is an inspiration. Even though they decided to not continue the legal battle, that man will think a hundred times before flashing another woman. I have never understood why men think it’s okay to flash a woman. What are they expecting will be the end result? The truth is though, out of all the women who do get flashed or harassed, very few report the incidents and even when the incident gets reported, the flasher inevitably walks free. Yes, we need stricter laws against harassment but that’s going to take a long time. Until then, let’s us all be as alert and proactive as Nupur was.

A Man In Bengaluru Flashed And Masturbated In Front Of A Woman On The Road In Broad Daylight. This Is So Disgusting

GET HAUTERFLY IN YOUR INBOX!
Related ItemsFeaturedTrendingflashinggirl gets man arrested for flashingharassmentsBangalore girl gets her flasher arrested