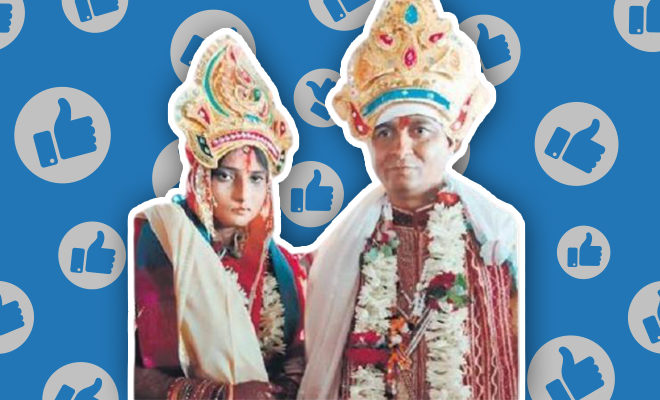 This Differently-Abled Couple Met On Social Media And Decided To Tie The Knot. Their Love Story Is Adorable

A few days ago, I was talking to a friend who was telling me about how she met her boyfriend on Instagram. He slid into her DMs and that’s how their relationship kicked off. I remember feeling a twinge of jealousy considering the only people who slide into my DMs are creepy men looking to be ‘fraands’ and fuckbois who have nothing better to do. On the other hand though, just thinking about actually having a conversation with a stranger on social media is terrifying because of all the horror stories we’ve heard. But that doesn’t mean that you can’t find love in hopeless places. Rihanna was right after all. Sometimes you get lucky. Just like this differently-abled couple who met through social media and recently tied the knot in Odisha. It’s like a fairytale for the digital era!

After meeting on Facebook six months ago, 43-year-old Laxmirani Tripathy of Sambalpur and 48-year-old Mahabir Prasad Shukla of Jharkhand tied the knot in Odisha on Sunday. Both of them are speech and hearing-impaired since birth. Laxmirani has completed sewing and beautician courses while Mahabir is an electrical contractor. Their love story is just adorable.

Six months ago, when Laxmirani met Mahabir on Facebook, they were obviously unable to communicate over a call. The two started talking via messages on the social media platform and got to know each other. They even video called several times and spoke using sign language. Soon they decided to get married and their families were overjoyed.

#Socialmedia sure has its perils but it is also the reason that these two differently-abled people in their 40s from Odisha found each other & love, despite all the odds. @XpressOdisha @siba_tnie https://t.co/8adhf57H0S

Also Read: This Russian Couple Sneaked Into A Cinema Hall, Stole Snacks, Had Sex And Then Cleaned Up After Themselves Before Leaving

Laxmirani’s 21-year-old nephew Arnava Babu said, “My aunt found Mahabir Ji on Facebook and they remained in touch over different social media platforms. After interacting for some time, my aunt informed her decision to marry. The groom’s family also agreed for the marriage. But we are really happy as she could find a compatible companion for her. The family members consider it God’s will and are hoping that both will certainly share a peaceful and happy relationship.”

We are so focused on the downsides of social media that we forget its power to bring two people together. This differently-abled couple got married despite all odds only because social media provided a platform for them to get to know each other without hurdles. It’s such a cute love story!