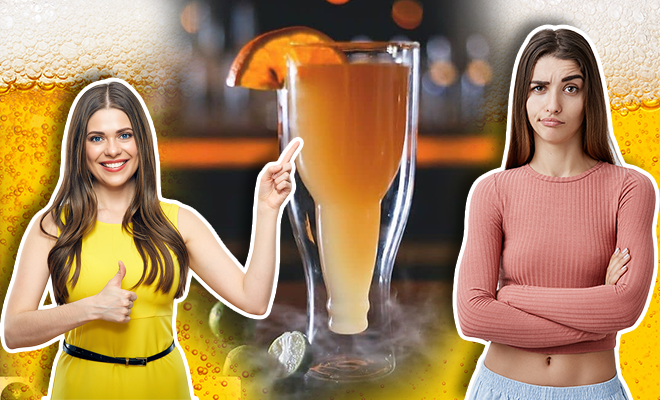 This Bar Is Serving ‘Female’ Beer And We Have Wet Ourselves With Excitement. We Can’t Thank Them Enough

There are two kind of people in the world – the ones who drink and the ones who don’t. Of course, there are various kind of drinkers and people who prefer all kinds of drinks. And while some of them require you to acquire a taste, none of them require you to be in possession of a vagina. Except this bar in Gurgaon that has graciously made us beer that the female population can consume. Because you know, as well as we do, that we can’t handle regular, “guy” beer.

Brands, can you please f%*king leave us alone? We don’t want Female Beer or Female anything

First of all, kudos to them for thinking of this. I mean, how considerate that you should come up with a whole new variant for us.  Ardor, a bar in Gurugram (obviously), has offered women a chance to try the first of its kind ‘female beer’ that, get this, is a non-strong and non-bitter concoction for the ladies. Uff, how sweet are they. Making a not strong, not bitter beer for us. Because women obviously cannot handle hard liquor right? Or according to many, liquor at all. See, we have been drinking guy beer all this time, hating it but stuck because we had no options. Plus, we were getting drunk and who drinks for that, right? Thank god this came along. But we are so happy. Thrilled, positively. Maybe we can now finally go out, enjoy a mug? Flute? of beer and come back safe? Oh wait, we can’t. Coz, this is no country for women.

For years now, women have been simply handed the drinks menu, only to order themselves either a breezer or a glass of wine. Or in select cases, pink cosmos. But boys? For them it is all about gin and tonics, neat whiskey and tequila shots. Whether this notion arises out of the stereotypes people have made around women drinking or their own ass, is still not clear. But to set the record straight, women don’t need sweetened drinks to gulp down or a cosmo on a ladies night to get high. They can just as easily chug a beer can down, perhaps better than the man leering at them at the bar counter or sit back and enjoy their single malt. Neat. And we aren’t the only ones feeling annoyed by this unnecessary charity, there are many netizens who agree with this idea being plain ridiculous.

And the servers always hand over the drinks menu to hubby and I get the food menu?

So all this time, I have been consuming "Male Beer". So many things to learn. #idiotmarketing

How patronizing can one be

Also the bottle design is just gross. Why would we want to drink out of something that looks a menstrual cup? Ew.

And the question here is not even about capabilities or capacity to drink, but how a preference has been used to stereotype a woman’s drink. And to think of how sexism has now trickled its way into food and beverages is just making us cringe non-stop. We don’t need a fruit beer the same as we don’t need a ladies night to step out. And for those who still don’t sit right with the fact that women can actually prefer beer and drink it even, here is a quick history lesson for you all.

History has it, in writing, that it was the ancient Mesopotamian women who first discovered, developed, sold and even drank beer for the first time. Civilisations have evolved and seen women brewing this lovely drink that restaurants have now cutely tacked to a men’s only beverage, based on their little to no knowledge on facts or basic feedback from women. How this women’s invention became a man’s drink, we really mean to know. But for the time being, how about you shove your chauvinistic female beer up your sexist derriere and get us a whiskey sour?