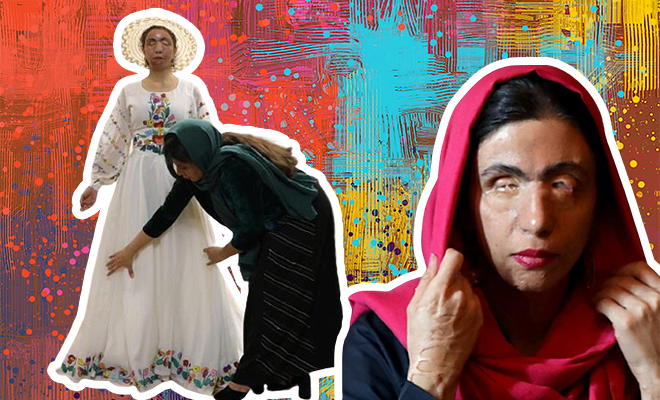 For the few seconds that I close my eyes and still have some time left on my hands to fall asleep, I sometimes try to make sense of  the darkness before me. The pitch black almost coming at me with a disturbing silence and the feeling of knowing something is out there but I cannot see it, making me feel my most vulnerable. Now, to imagine living my whole life without sight, I probably cannot fathom the fear, the helplessness and most of all the pain that would come with it. An unimaginable experience that turned the life of Masoumeh Ataei upside down, after she was attacked with acid by her ex-husband’s father and lost her sight.

Masoumeh wasn’t happy in her relationship with her husband and decided to file for a divorce with the man almost 10 years before the tragedy befell. Irked by her decision, her ex-husband’s father who couldn’t take it, threw acid on her face, her hands and as a result ended up scarring her horribly and blinding her with the acid. An occurrence that sadly, isn’t all too uncommon, especially in countries like Iran. Of course, India isn’t any better but in this case, we might be marginally better off, which isn’t saying much.

In just a span of ten years, the woman had to undergo almost 38 surgeries to handle the disfiguration that came with the acid attack, and yet she wasn’t close to the life she lived before. Despite travelling to the States for a surgery to regain her sight with the best doctors, nothing worked. And while most of us at this point would lose all hope, Masoumeh wasn’t going to let this incident define the rest of her life.

Her name is Massoumeh Ataei. She is an acid attack victim from Iran.

The government in Iran censored her voice (and those of hundreds of women like her).

She also has to deal with internet-filtering.

But Massoumeh refuses to be a victim. She's the true icon of a strong woman. pic.twitter.com/MWt08rfs3y

Also Read : A TikTok User With Millions Of Followers Posted A Video Glorifying Acid Attacks. This Is So Sickening

Today, she defines beauty as, “Beauty is not just how people look. If a woman is disfigured or has a blemish on her face, that doesn’t mean she isn’t beautiful. Beauty can be defined by other criteria.” She went on to share, “Perhaps a beautiful face is all a woman has. Once her face is ruined, it is difficult for that person to accept and return to society again.” Clearly people’s judgement of a person based just on their looks, doesn’t make it any easier.

However, she still finds a way to stay positive and says, “I was very troubled, afraid to hear inappropriate things from people and worried about the consequences. However, everyone helped me return to life very positively.” Now,  she tries to live a life as normally as she can, indulging in wearing beautiful clothes, clicking and posting pictures and staying strong. She’s survived an acid attack and she now models for local Iranian boutiques.

Her story doesn’t just make us feel inspired, but also reminds us exactly why there needs to be more awareness to curb such acid attacks and stricter punishment for those who ruin the lives of women out of spite and damage to their male egos.

Also Read : A Woman In Tripura Threw Acid On Her Ex Boyfriend After He Refused Her Marriage Proposal. This Is Not Okay