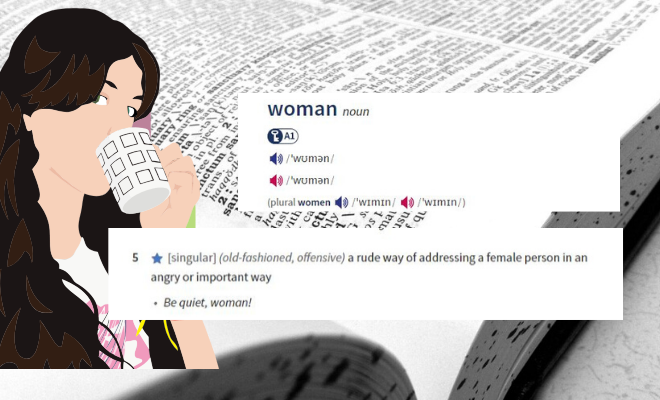 The Oxford Dictionary’s Definitions Of “Woman” Include ‘Bitch’ And ‘Maid’. An Open Letter Is Seeking To Change This And We Want To See It Happen

A lot of people would have you believe that women are made of just sugar, spice and everything nice. But that is only true of the PowerPuff Girls. Actual women are made of beauty, strength, ambition, pride, kindness, and fierceness. We have the exact same qualities that a man does and some bonus ones but even then, the world refuses to believe we are anything more than a wife, a mother and a cook.

For centuries women were described using adjectives that were either objectifying or derogatory. We knew it then and we know it now, that calling a woman, “sugar” or “bitch” is highly sexist. But why does it still happen? It is 2020, the feminist movement is in full swing and people are still defining and referring to women the same way they did all those years ago. We are not having it.

Maybe the answer lies in the fact that the Oxford Dictionary has some seriously sexist definitions of the word “woman”. The definition and the examples of the usage of the word include some really derogatory and medieval sentences like, “Come on, woman, please stop arguing”. This plays into the stereotype that implies women are hysterical and they keep arguing and nagging uselessly. Basically, this plays into every stereotype that men have made for us. Even the dictionary has been written by a man? Ugh!

Also Read: Oxford Dictionary Includes Interesting Words Like Chutzpadik And Manspreading To Its List. We Can’t Wait To Use Them!

The reason that this is such a problem is that Oxford Dictionary is the Holy Grail for the English speaking population of the world. Every school, every college in the world teaches the language using the Oxford Dictionary as their prime reference point. In an attempt to change these “sexist definitions”, the leaders of the Women’s Aid and the Women’s Equality Party have sent an open letter to the Oxford University Press.

The letter states that the definition of the word woman includes synonyms like “bitch”, “maid”, “chic” and “damsel”. It states, “Bitch is not a synonym for woman. It is dehumanising to call a woman a bitch. It is but one sad, albeit extremely damaging, example of everyday sexism. And that should be explained clearly in the dictionary entry used to describe us.”

Meanwhile, the definition for “man” is “a person with the qualities associated with males, such as bravery, spirit, or toughness”. And its examples include, “a man of honour” and the “man of the house” From what I understand, men and women are portrayed extremely stereotypically in the Oxford Dictionary . The men are described as macho and the women described as the damsels in distress. The definitions of men, almost all of them, are flattering and with positive qualities, while the ones of women anything but.

The letter goes on to state, “Synonyms and examples such as these, when offered without context, reinforce negative stereotypes about women and men. That’s dangerous because language has real world implications, it shapes perceptions and influences the way women are treated.”

Also Read: UN Secretary-General Antonio Guterres Says Women’s Rights Are Dire And We Need More Men Like Him To Acknowledge Their Privilege

Fresh call for Oxford dictionaries to change 'sexist' definitions – Its our #IWD20 celebration on 8 March and sadly we still have campaign for a change to the Oxford dictionary’s definition of woman ! https://t.co/y98SMQoLZx

This is not about being politically correct, it is about something as simple as not being disrespectful towards women. I mean, if you learn as a child that the synonym for the word “woman” is “bitch”, given that that is the dictionary definition, and that’s bound to have some effect on your thinking. Your entire perspective towards women is automatically skewed and that is not okay.

Language is a powerful tool and a dictionary is where we learn even our most basic words and their meanings. Did you know that it is the Oxford Dictionary that is licensed by Apple and Google and it is essentially the most widely read Dictionary in the world? The letter says, “Its inclusion of derogatory terms used to describe women should aim at exposing everyday sexism, not perpetuating it.”

The open letter has been published in time for the International Women’s Day on 8th March and it marks the latest call to the Oxford University Publication to change these definitions. This is part of a campaign that was launched last year by Maria Beatrice Giovanardi and to date, her petition has over 30,000 signatures to it.

I completely agree with the fact that this is much needed. With the advancement in the feminism movement, then dictionary must be updated as well. The least they can do remove the offensive terms and replace them with appropriate ones. Of course, many would argue that changing a definition on paper or on the internet doesn’t really account for real change. Perhaps. But hey, it has to start somewhere and this is exactly that. A step in the right direction.

Hey Oxford Dictionary, Here Are Some Fun Indian Words Besides Chuddies To Include