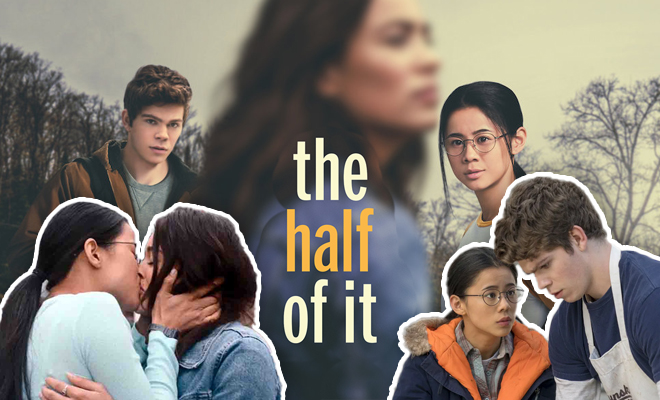 The Half Of It’s Portrayal Of Love Is Refreshing And Achingly Romantic. But It’s Also About Self-Acceptance And The Ambiguity Of Relationships.

When it comes to LGBTQ+ representation in modern cinema, our expectations have been set to a low. The thing is that for the longest time, like real people, the celluloid experience too didn’t acknowledge anything apart from heterosexual relations. And even the smallest representation, even the misrepresentation for that matter went appreciated because it at least started a dialogue. So when I started watching The Half of It on Netflix, I didn’t know what to expect. But this movie comes from Alice Wu, an Asian-American gay woman whose movie, Saving Face about a similar theme has been an honest and warm portrayal of same-sex romance. I had a feeling The Half of it will not disappoint – especially because it essays the journey of a Chinese-American teen coming to terms with her sexuality. That sounds like a story Alice Wu knew too well to make anything less than raw and real.

The Half of It revolves around Ellie Chu (Leah Lewis), a reticent, don’t-have-time-for-love kinda girl whose virtuosity with words makes her some side-money – which she carefully spends on her household. She lives with her father, a man whose great potential is overshadowed by his unlettered English in an overwhelmingly white Squahamish. It’s an imaginary town created by Wu to give the characters the ability to flourish in a place that is surprisingly non-judgemental for a highly religious space.

Self-acceptance is a process

Right at the start of the film, the students are shown singing ‘The Annie’s Song’ in their choir rehearsals, and watching Aster Flores (Alexxis Lemire), another girl of colour in Squahamish, Ellie Chu is feeling ‘something’. She has no idea yet and she has been in denial of her sexuality, which she will come face to face in due time. Meanwhile, Paul Munsky (Daniel Diemer) is crushing on Aster very evidently, considering he is straight and he doesn’t have to think twice about what those feelings can be.

A high school jock, he is very aware of his inarticulateness and seeks the help of the textually gifted Chu to write a letter to Aster. And just out of monetary need, she obliges. Soon, what was supposed to be one letter turns into meaningful conversations over text messages – about art, literature, and life. Ellie Chu begins to really see Aster, and this time not just for her beauty.

While Paul is really infatuated with Aster, they lack connection considering it’s actually Ellie who is talking to her. Their wavelengths don’t match and he is just drawn to her for very obvious teen-ish reasons. The scene in which Ellie articulates the reasons for which Paul should like her…talking about the way she twirls her hair, how she laughs is one of the landmark moments in the film. At that moment, Ellie gets defensive because she realises that she has fallen for Aster.

Elie realises that Aster is much deeper than her company- a popular and shallow group of teenagers – makes her look.  What’s more, she realises that she too shares her feelings of not fitting in and having to pretend to be someone else. They connect on how nobody sees them for who they are. People see Ellie Chu as the brainy, reticent Chinese girl, and Aster as a beautiful woman who will possibly be married off to the wealthy football player Trig.

Ellie and Aster’s in-person interactions show beautiful chemistry and even though none of them are making any moves, you keep wondering if Aster is actually flirting with Ellie or we just want to see it that way. But really the most beautiful scene is when Aster takes Ellie out and they spend the day together, as “friends”. They drive around and head to a lake where they just lie floating, looking into the sky and having the shortest meaningful conversation ever. At that moment, they both feel – that even though they both are verbally expressive – they get each other without words.

The best part about that scene was that it showed love as love; it wasn’t classified as straight love or gay love. Their scenes show that same-sex love stories are just love stories and thus aim to normalise the concept for those still unable to wrap their heads around it.

This film essays the journey of Ellie from being in denial and defensive of her sexuality to finally accept and feeling free to reveal herself. Paul, who becomes her best friend over time, tells her that “it’s a sin” and she will go to hell for it. Again, this shows how religion sees homosexuality as a sin and how several good people are still prejudiced because of what they’ve grown up to believe.

But Paul and Ellie’s father, both really bad at words share a moment which helps Paul understand things better. Elie’s father asks him if he has ever loved someone so much that he didn’t want to change anything about them and he realises that he has to be Ellie’s friend for all that she is, without judgment. He even realises, out of his own experience with Aster that pretending to be who you’re not is really suffocating and Elie shouldn’t be confined to that fate for life. In the end, Paul speaks his mind at church and Ellie too feels the courage to come out as chaos takes place right there.

ALSO READ: 10 LGBTQ Movies And Series You Can Watch On Netflix To Celebrate The Pride Month

It’s okay to be confused about your sexuality

While we had our doubts about Aster’s attraction toward’s Ellie, in the end, she opens up too about her feelings. It’s shown that she did feel attracted to her and those thoughts did cross her mind. But like for Ellie, she hadn’t really figured out her sexuality yet. And that’s okay. Because our society has normalised only heterosexual relationships, most people didn’t even have the opportunity to really think about other possibilities. But if we observe, the only genuine romantic connection she shared was with Ellie, a girl and not with Paul or Trig. Aster hopes to be able to figure things out in a couple of years and they share a warm kiss.

But if you ask me, this movie speaks so much more than sexuality. It talks about the lives of minorities and immigrants, how casual racism occurs. It talks about how people are in search of that true connection in a world where you’re mostly judged on your appearance. It’s really a big bright rainbow of love, friendship, acceptance, and an ending that doesn’t get you what you wanted but even better – freedom!

ALSO READ: Supermodel Cara Delevingne Opens Up About Being Pansexual And How She Came To Terms With Her Own Sexuality