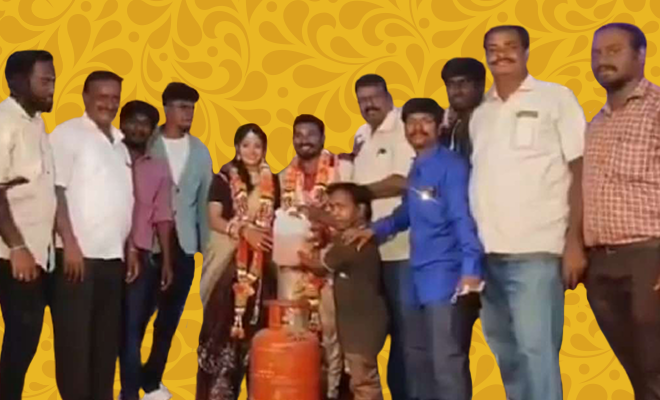 Friends Of A Couple From Tamil Nadu Gift Them LPG Cylinder, Petrol And Onions As Wedding Present! This Has To Be The First Time…!

Call me materialistic, but gifts are important to me. Not just a way of showing concern, appreciation or love, gifts are a way of enriching the other person’s life with something of value. Be it as small as getting someone a pen, to as big as getting them a car, it is about congratulating someone with what we think they might use. Perhaps that is why, every year around my birthday, I hand out lists to my family and friends to choose from, making sure that whatever they get me, will ultimately be of use to me. And working along the lines of a similar mindset were the friends of this Tamil Nadu couple, who took the art of gifting rather seriously and came up with gifts that were the need of the hour—an LPG cylinder, some petrol and onions!

Surprising the happy couple with expensive and unexpected gifts were their friends who have made headlines with their unique wedding gift ensemble. Different from any other wedding present you may ever have heard of, the friends of the bride and groom decided to gift them an assortment of an LPG cylinder, a gallon bottle of petrol, and garlands of onions!

Also managing to get these thoughtful presents up on the stage for a photo to be clicked of this memorable moment, the friends considered that since inflation is at its peak, it is best to gift the couple items which they wouldn’t be able to afford when time comes.

Couple gets Petrol, Gas Cylinder and Onions as a Wedding Gift in Tamilnadu. pic.twitter.com/Wczs2EgQSx

Also Read : In A Viral Video, Man Seen Spitting On Dough To Make Rotis At Meerut Wedding. This Is Extremely Disgusting!

Amused at the thought that went behind it, netizens are sharing more than a chuckle as the picture of the group pf friends posing with the couple and their gifts goes viral. Coming as quite a sarcastic jibe on the government for increasing prices of these items to the point that they now seem to have entered into the category of premium wedding gifts, the move was as hilarious as it was thought provoking.

Meanwhile, pictures from their ceremony along with videos where other guests too are posing with the petrol and gas cylinder, while the bride has been made to wear the onion garland is making both – rounds and a statement on the internet. The only person missing here is the mother of Raju Rastogi from 3 Idiots who predicted long back that if the inflation keeps up, paneer would be as priceless as gold and be sold in little packets at the jeweller’s. We at least know, onions are!

Also Read : Dia Mirza Had A Woman Priest For Her Wedding And We Love How She’s Smashing Patriarchy