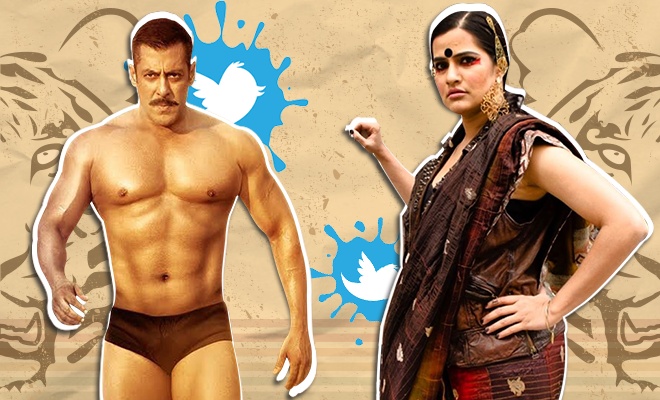 Sona Mohapatra Takes Another Dig At Salman Khan And Calls Him A Paper Tiger. He Deserves It!

There is a famous saying that goes like, ‘Hell hath no fury like a woman scorned’, and today, we saw the saying come alive. We know now that singer Sona Mohapatra takes no prisoners. And she was up in arms, without worrying about Salman Khan’s cult following, for Priyanka Chopra when Bhai was taking digs at her giving it back with a slap in the face. She’s not the kind to mince words and we can see that. There’s no stopping Sona who is in no mood of backing out of the virtual fight she has going against the Bharat star.

Cus @priyankachopra has better things to do in life, real men to hang out with & more importantly, girls to inspire with her journey. ???

It all started when the singer slammed the actor for taking absolutely childish and unnecessary digs at actress Priyanka Chopra for backing out of the film Bharat. Her take was that the actress had better things to do in her life than be part of a film that Salman nonchalantly quoted could be the ‘biggest’ film of her career. And while we completely saw eye to eye with her on that, certain Salman fans thought  sending her death threats was more appropriate.

Q. What do you call filmi superstars that don’t even deliver a single, full week of returns in the public domain despite all the hype, promotions & posturing?
A. Paper Tigers
(P.S : Stop worshipping these paper tigers dear #India . Let’s find & BE more worthy ‘heros’) https://t.co/VkZKUvKj93

However, Salman, for someone having a big mouth, surprisingly had nothing to say about that or even take responsibility. Regardless the singer is not slowing down as she took another hiss at the actor by tweeting, “Q. What do you call filmi superstars that don’t even deliver a single, full week of returns in the public domain despite all the hype, promotions & posturing? A. Paper Tigers (P.S : Stop worshiping these paper tigers dear #India. Let’s find & BE more worthy ‘heros’).”

Her creative dig, did not just make sense but also made us laugh at the fickle reality that is showbiz. This was not all, earlier too Sona Mohapatra made her discontent very obvious as she had tweeted, “A showcase & poster child of toxic masculinity. Low brow dig at not only a woman who was not in the room but a disgusting disregard & contempt for the woman & colleague sitting next to him in the same room. Unless we call out such serial bad behaviour, nothing changes, #India.”

A film, whose promotions were so widespread that everywhere you looked, Katrina or Salman were there, making an appearance, started faltering at the box office in the second week itself, closing at only 3.75 crores on its second Friday. Seems like you can only blindside the audience into watching  your movie for so long till the actual reviews and reality surfaces.

Guess that is what happens when you try to sell the actor and not the script, or lack thereof. No wonder we thought that Priyanka Chopra dodged a bullet with this one.