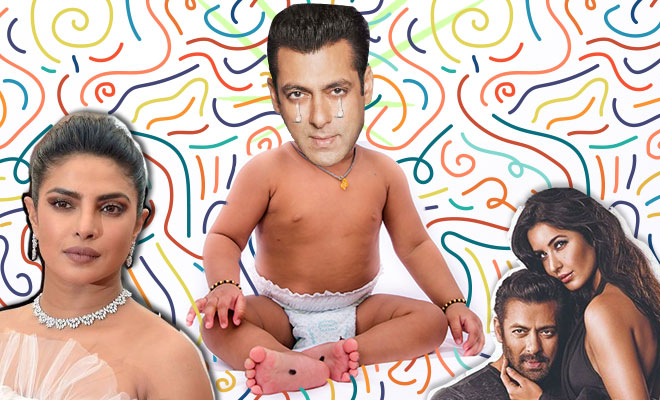 We’re Going To Say It. Salman Khan Is An Egoistical, Misogynist Man Who Refuses To Grow Up

Before you shake with fury at my allegation, let me tell you I am not a Salman Khan fan. I don’t like the man, what he stands for and the things he does. So, it’s possible that this article is biased. But come on, he had it coming. If you’ve read anything he has said recently, it will permanently put you off the man and his very starry-eyed clan (read Bhai fans). ‘They were said in jest,’ you say. Of course, he’s hilarious. So funny. But when it happens over and over again and it’s laced with malice, it becomes difficult to believe it’s all just fun and games. Of course, then his active PR machinery (he must pay them a f*** ton) kicks in and he backtracks. Or someone comes to his rescue. Oh come on, let’s cut the BS. This is a man full of ego and up till his forehead in misogyny and we refuse to see it because, I don’t know, we seem to enjoy babying fully grown up men.

The man has been on a roll recently, taking jabs at Priyanka Chopra for quitting his Eid release Bharat. The movie stars Katrina Kaif now. During the promotional spree of Bharat, Salman decided to take potshots at PeeCee stating, “And she, over Bharat, did choose USA in the ‘nick’ of time. She has worked so hard all her life, okay? And when she got the biggest film of her life, she dumped that film and got married. You know, hats off! Usually, people leave their husbands for a film like this.”

We’re sure exactly four people found this funny. And we suspect three of those are employed by the actor and the other guy is probably driving his rickshaw, but took time to appreciate a layered joke like this. But because Bollywood is petrified of rubbing Salman the wrong way, they immediately jump to his defense. Here, Katrina Kaif was quick to say that this is just his sense of humour and he means nothing by it. “It’s all good fun,” she reportedly said. Sure, Katrina. He’s harmless. But then so are mosquitoes and we don’t see you coming to their defense.

Today, Salman decided all those who were miffed (he would deem ‘unnecessarily’ so) would have to be pacified and has gone on to say that Priyanka Chopra’s move was actually quite cool. “It’s a wonderful thing what she has done. She did it knowing perhaps that I might get upset, I might not like it or might not work with her… Despite all the thoughts that may have crossed her mind, she chose to get married to a man instead of this movie, which is a correct, noble and gutsy thing to do,” he told Times Of India in an interview. We’ve so many problems with this statement. First of all, and this may come as a shocker to him, but Salman, PeeCee doesn’t care about whether you would like it or not because her world doesn’t revolve around you. We will give you a minute to let that sink in. Secondly, anybody in their sane mind would choose personal life over work, and that’s how it should be.

We are sure that something prompted him to come out with a clarification. The tremendous backlash (he would have been duly updated by his PR machinery) perhaps? This is because despite the blind following he enjoys, some people were up in arms about his stupid comments. Sona Mohapatra, for example, was quite irate and made that obvious with her tweets.

Cus @priyankachopra has better things to do in life, real men to hang out with & more importantly, girls to inspire with her journey. ???

But see that’s the thing. The man simply doesn’t learn. We imagine it’s because it’s so difficult to look beyond the massive bubble that is his ego. Sometimes, the man delivers comments that reek of such crass misogyny, they should get a special mention on the wall of assholes (there should be one like that!). During one of the press meets for the movie, he also suggested Katrina should get married and have kids. Because despite her professional accomplishments, he thinks women should be restricted to society-defined gender roles. Why is this man allowed to clamber on to a stage and make this voice heard? It should be illegal.

You may think that this is because Bharat is coming out and the movie needs tickets to be sold and raking up controversy is a good way to go about it. You would be wrong. Earlier, abandoning all sanity and filters, the man had this to say about training for Sultan. Apparently, the training for his role as a wrestler was intense and he felt like a ‘raped’ woman. We want to knock his head in for that comment but then again, maybe he was just joking. *rolls eyes* Now you’d think that a man with that kind of following would own up and apologise. Nope. Arbaaz Khan, his brother, came to Salman’s defense saying he meant he worked very hard. Oh, let’s all go along our merry way then. Nothing to see here. We would have stopped there but Salim Khan, Salman’s dad obviously thought it was horribly put and apologised on behalf of Salman. You get the drift? The man says something regrettable or idiotic and his family and co-stars will jump to protect him from the onslaught of negative comments.

Either Salman should be asked to shut his trap and keep it that way. Or should be given classes on how to be less of a f***ing baby. Own up to your comments and mistakes and learn to apologise. What we are saying is, grow up. Or grow a pair. Whatever will make him more responsible.