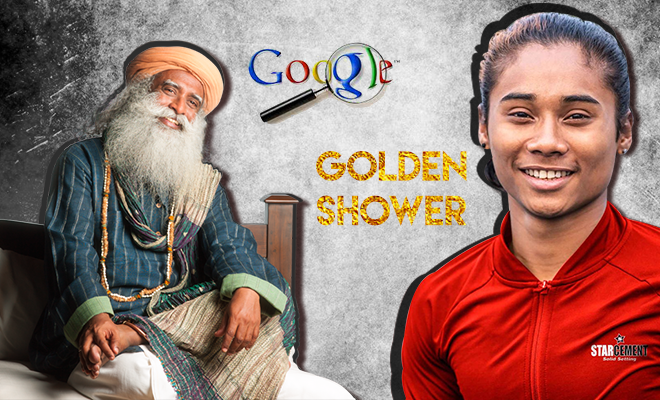 India, before it was known as anything else, was known to be the land of diverse cultures and spirituality. People would come here from all over the world to experience and attain nirvana. Be it through the way of travelling to the Himalayas and meditating or by devoting themselves to one of many gurus that India has. One such guru, who has always endorsed the concept of spirituality and sought to make people aware of their bigger purpose in life, is Sadhguru. Highly qualified, well versed in spiritual dialects and if the latest news about him is anything to go by, a little weak on innuendo.

This piece of information found its way to the people in the most absurd way possible, and happened when Sadhguru sought to congratulate the Indian sportswoman Hima Das on her much impressive accomplishments of winning India 5 Gold medals in one month alone. Among many others who took to Twitter to pass on their wishes, Sadhguru was the only one who made his congratulatory wish an awkward twitter thread in itself. And for good reason. The guru wrote, “Hima Das, a Golden shower for India. Congratulations and Blessings. -Sg”

Okay who's gonna tell him? https://t.co/9NalE1fNIU

Guruji, May you enjoy many more golden showers too ✋? #GoMutraBucketChallenge

Look up the meaning of 'golden shower', o enlightened one 🙂

Now, one read through it and you’ll be as taken aback as any of us. He basically blessed Hima with a sexually pleasurable urinating shower, and Twitter didn’t let go or go easy on him.  I mean, for someone who professes to possess profound knowledge and is such a learned man, claiming to know the human desire and talks about spirituality in the most lovely way, this was just, what was this even?  Okay, let’s give him the benefit of doubt. Perhaps he did not know what he was saying or perhaps did not mean to, but maybe do a quick Google search before you unleash an extremely weird wish on someone. It is deeply disappointing.

This is so problematic. Again, had it been a simple typo or an honest mistake, we would’ve understood, but a word like ‘golden showers’, isn’t used colloquially anyway – unless you’re perhaps discussing a very rare kind of foreplay-  being used to describe a woman who has won us numerous accolades, is downright disrespectful.

Sadhguru should’ve known better, than to type along an irresponsible message, that twitter now gleefully dissects and disseminates as memes. After all, what did he even thought it meant? We would’ve understood had he written ‘showering India with gold medals’ or the likes of it, but a golden shower, seriously? What’s next? Referring to pat on the back as a spanking?

Guess the guru really needs to employ a team to help him with his grammar and use of provocative english terms. And till then? No tweets for you Guruji!

Victoria’s Secret Is Suffering Due To Sinking Sales And Plagiarism. And Here’s Why We’re Okay Without Their Uncomfy Bras!

KLM Says Mothers Can Breastfeed If It Doesn’t Offend Other Passengers. Close Your Eyes If Breasts Offend You, Man!

Also Read : This Swami Got Offended By Women Doctors Sitting In The Front Rows And Didn’t Deliver His Speech. It’s Hilarious!