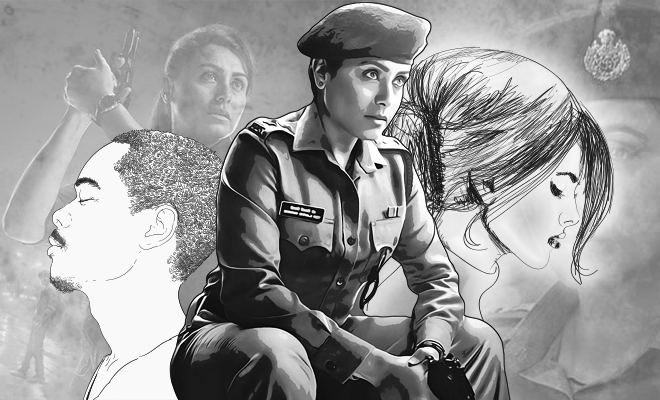 Rani Mukerji Said Mardaani 2 Will Show That Men Shouldn’t Cross Some Lines. Because Limits Are Not Just For Women, Right?

I don’t understand how not just in our country but all over the world, feminism is always a responsibility lain on women’s shoulders. And I am not talking about the brand of feminism that involves hating men and doing wrong to them, just to feel superior. No, real feminism is about establishing equality by bridging the gap between genders. It’s about not letting women be pushed down to the bottom and be at a disadvantage, for being women. And this is not just our responsibility! Men too should share it and those who can’t are equally guilty as the perpetrators.

So I especially feel provoked when certain male acquaintances talk about feminism as if it’s a bad thing or how it’s a “women’s thing”. I mean, sitting comfortably in the lap of privilege, you wouldn’t understand what it feels like but you should at least try! Which is why recently, Rani Mukerji spoke about her movie Mardaani 2’s message and how it is not just for women, in fact, it is especially for men! I had to write about it because the way she went on to explain why that is, is exactly the school of thought we need today.

Rani Mukerji plays the role of Superintendent Shivani Shivaji Roy in Mardaani 2 (releasing December 13), who is trying to catch a serial rapist who rapes and gruesomely murders young women. She revealed how this movie is not just about educating women but also men because they should be equally responsible in creating the world a safer place for us. “I think it is very nice that through a film medium, an entertainment medium, you are also saying a very important thing to the audience, for the men especially; the country that we are staying in today. The Nirbhaya case happened; I think women and men react in the same way. They are both angry, they are both disgusted, and they are both shocked that human form can take the face of a demon. And that’s what we are showing in Mardaani 2,” she said.

She further said, “It is a film for both men and women, where sometimes men cross lines with women, thinking this is the only thing I did how come she reacted like that. It will give perspective to men as to where be the limit, where they shouldn’t even do what they are doing because slow and steady makes them monsters. Because without them knowing they would have committed certain things in their heads thinking that it is not a big deal. So it is important to tell such men that it is not okay and for women how important these things are.”

Our nation is already feeling shook by the Hyderabad rape case and with one gruesome rape after another, we are feeling angry and helpless all at the same time because going at this rate, we can’t live in a hazardous environment for long! And Rani’s statement, I believe is what we exactly needed to hear and implement. Because a society which is so unsafe for women speaks bounds about the kind of monsters it harbours. It talks about a lack of humanity more than anything else.

Men need to be taught, from the most basic level on how to treat women. They need to be re-wired on every level – small or big – that women are treated unfairly. From mansplaining women to using ‘like a girl’ as an insult, this is so deeply ingrained that we don’t even realise it when we’re being party to it. Domestic violence and sexual crimes show a forceful exertion and on a more fucked up level, restoration of power and strength and enjoying the sight of women succumbing to it. I can vouch for the fact that these men who turn into rapists grew from doing small acts of disrespecting women when they were young. It probably turned into eve-teasing and groping, and finally into rape! They need to be repeatedly told, nit-picked on and micro managed into realising how women are not a property to use, exploit and destroy.

ALSO READ: Jaya Bachchan Called For Public Lynching For The Hyderabad Rape Case Accused. We Don’t Know If That’s Right But We Feel The Same Rage.

So dear society, instead of teaching your daughters to be covered and not go out after dark, can you please teach your sons to not be assholes? Why aren’t children taught in school about respecting women and the concept of consent? When was the last time we asked our sons to not go out late in the night, on the off chance they rape someone? We even had ‘Dignity of labour’ which somehow is more important than women’s dignity, because clearly the latter is not spoken about. Why can’t we have regular counselling sessions in schools, colleges, offices, residential areas and slums? We, at this very point, are way past the stage of not being comfortable at the mention of such cases and no matter how bitter or hard it gets as a pill to swallow, it is time the men of this country are schooled on keeping it in their pants.

ALSO READ: Dr. Priyanka Reddy, Played By All The Rules And Still Ended Up Getting Raped And Burnt To Death. When Will This Ever Stop?