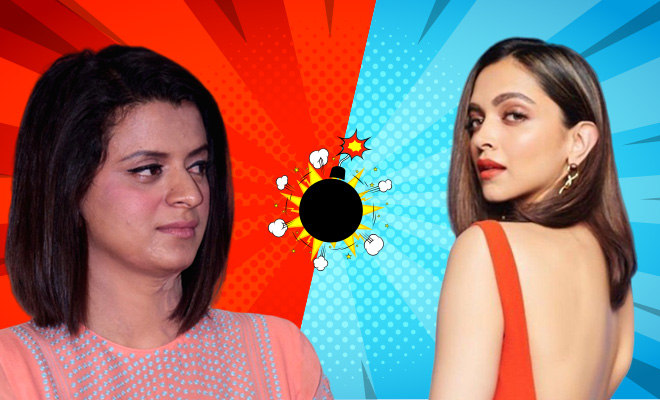 Rangoli Chandel Slams Deepika Padukone For Showing Up At The JNU Protests By Calling It A Promotional Gig. Come On Rangoli!

I’ve always been told, time and again, that no matter what you do in life, you can never make everyone happy. And come to think of it, it’s very true. There will always be one person or the other who will always stand to dislike your take or action on certain things, and that is okay. Because at the end of the day, if you can’t make everyone happy, the least you can you do is to make yourself happy. As is what was done by the Chhapaak actress, Deepika Padukone who chose to stand in solidarity with the JNU students, while joining the recent protests in Delhi, even if it came at the cost of making quite a few people hate her for it. One such hate monger being the unabashed and unsolicited, Rangoli Chandel.

Also Read : Deepika Padukone Turned Up At The JNU Protests. Here’s Why We Think It Wasn’t To Garner Publicity For Chhapaak

Every time a Bollywood celebrity does something, anything, or sometimes absolutely nothing at all, we have Kangana Ranaut’s sister Rangoli Chandel sneaking in to make yet another accusation with little to no sense. And she seems to have not disappointed in keeping up with that relentless streak of taking digs at people, by coming at Deepika Padukone this time. Some hailed Deepika for being brave and standing up for what she believes in, even if it came at the cost of her safety or her film, while others, the more cynical ones like Rangoli, dismissed her for speculating it just a promotional gig.

Continuing further, she wrote, “(Contd)... mujhe achcha laga usne openly yeh kiya, bahut choohe abhi bhi bilon mein chupe hain… sab niklenge dheere dheere, but we should respect Deepika ne openly PR kiya JNU mein #Guts.” Pointing fingers at several others in the industry who haven’t yet made one effort to speak up in such a time, Rangoli Chandel, once again came at Bollywood all guns blazing. On one hand we have Rangoli criticizing Deepika for supporting the JNU protests for selfish reasons and on the other hand we have Rangoli applauding her about the fact that she did without being diplomatic about it. Neither of which makes sense to us or anyone for that matter. And mind you, this is the same woman who only recently lauded Deepika for taking up a movie like Chhapaak and lauded her for picking up a topic like this.

Rangoli, however, wasn’t also the first one to diss and dismiss Deepika for her actions, for there are several others who have trended ‘#boycottChhapaak’ on twitter and across social media, calling her an anti-nationalist and selfish to be using such a cause as a promotional gimmick. But the thing is, we don’t believe it. Think about it, Deepika had everything on the line here, from her safety to status, to fans and even the collections of her upcoming movie at the box office by taking a side here.

It is no news that most people in Bollywood, in an attempt to stay politically right end up never having or backing a strong political take out of the fear of losing avid fans who may not seem eye to eye with them. But not Deepika. Two day before the movie hits the screens, Deepika pulling off a stunt like this could’ve backfired, and maybe it will. But the fact that she stood by her decision to be present, even though not make a statement, was enough to realise that this wasn’t anything but real and true sentiment for the country and its people.

However, reason never has been one of Rangoli’s strongest suit, so we understand why she would feel so differently about it. Also because this wasn’t the first time she had taken an unnecessary and below the belt shot at the actress. A while back during the time of release of the movie Judgemental hai kya, Rangoli had called out Deepika and her opening up about her depression an ‘act’, all because the actress did not appreciate her sister’s movie. Talk about being petty and pulling an act here.

However, not paying to heed to what Rangoli wanted to say right there, we think that Deepika was brave to have taken that risk and stand with the students in such turbulent times. It is this compassion, support and patriotism that we wish to see from everyone around, and hopefully Deepika might serve just the right kind of an example for the same.

Also Read : Rangoli Chandel Says Ranveer Singh Can’t Be An “Outsider” Since He Already Had Bollywood Connections. She Might Have A Point