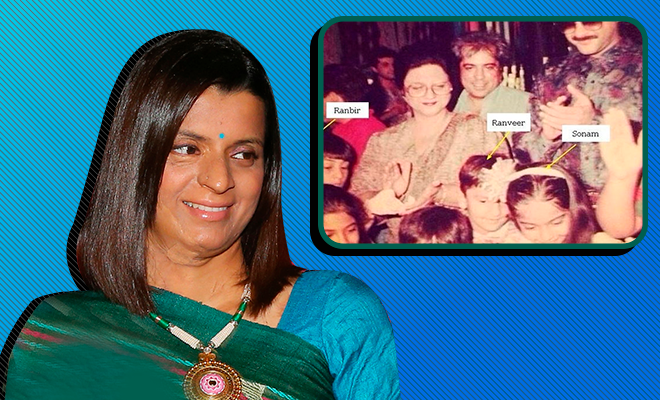 Rangoli Chandel Says Ranveer Singh Can’t Be An “Outsider” Since He Already Had Bollywood Connections. She Might Have A Point

It is only the third day of a brand-new year and our favourite Twitter star Rangoli Chandel is at it again (at least she is entertaining). There are two things I absolutely love about her. One, she can take just about any random topic and make it sound like a threat to our national security. And secondly, she will, and she does turn almost any topic to garner free publicity for her sister Kangana Ranaut, #SiblingGoals. You know, every time I see a post by her on my Twitter feed I get a little excited to see what brilliant thought she had. Huh, maybe her tactics are working.

I wish I could say Rangoli is known for a lot of things, but I can’t. She is only known for viciously attacking other celebrities and talking about things that have zero connections with her or Kangana. Like when she said Malaika Arora wasn’t a good mother or like when she said Deepika Padukone talking about her mental health issues was all an act. What even, right?

The topic that she has picked up time is nepotism (surprise surprise). On Friday, Rangoli found a tweet by some netizen which had a picture of Ranveer Singh, Ranbir Kapoor and Sonam Kapoor as kids attending what looks like another kids’ birthday party. The tweet (by another person) read, “Look at this outsider actor Ranveer Singh and his real struggle. Poor guy was attending parties in childhood with dharavi slum kids Ranbir Kapoor, Sonam kapoor. Such a Pity. MC Shera @SiddhantChturvD wud emphatise with him #AnanyaPanday would probably cry.”

Also Read: Siddhant Chaturvedi Slayed With His Response To Ananya Pandey’s Entitled Speech. But What Was That Ananya?

People with rich parents who have access to connections and opportunities don’t qualify as outsiders, people coming from small villages who can’t speak English and studied in small schools, have no money to buy fancy clothes and treated badly…(contd) https://t.co/PFGPJBCCH6

This tweet is in reference to when Ananya Panday was talking about nepotism and she paralleled an actor’s struggle with not being invited to Koffee with Karan and Siddhant Chaturvedi subtly gave it back to her by saying where her struggles start, his dreams are fulfilled. Yep, that was an epic comeback but that is not what we are talking about.

Retweeting that post, Rangoli had her own thoughts to add. In a two-part tweet, she said “People with rich parents who have access to connections and opportunities don’t qualify as outsiders, people coming from small villages who can’t speak English and studied in small schools, have no money to buy fancy clothes and treated badly,” She added “(Contd)… because of these three factors even though they have huge talent and competence are the ones who need special attention and our compassion , let’s empower the underprivileged.”

(Contd)… because of these three factors even though they have huge talent and competence are the ones who need special attention and our compassion , let’s empower the underprivileged 🙏

Here is what I am thinking- her words are a little extra as usual, but she does have a point in there somewhere. Ranveer Singh can’t technically be called an “outsider” because his father had a lot of connections to Bollywood before becoming an actor. That picture certainly is proof of that. But the successful actor that he has become today has nothing to do with his parental connections. Like Ananya was trying to say in a recent interview, being a star kid only opens the door for you what you do after entering the door is solely on you.

Yes, maybe someone with connections gets more chances than someone with no connections but that isn’t the reason they are successful. It also based on hard work that they do after they get those chances. Today, Ranveer is ruling the industry and I highly doubt that has anything to do with whether he is an “outsider” or not. Talent is important.

Also Read: Rangoli Chandel Is Upset That Film Makers Choose To Show The Love Life Of Historic Characters. Erm, What?

After she shot out these two tweets, a lot of netizens disagreed with her and thought she was referring to Kangana when she defining what “outsider” really means. While that probably is true, a whole lot also agreed with what she was saying.

Rangoli has a knack of making mountains out of molehills. Also, I would just like to say, there are a lot of other ways to “empower the underprivileged”. If Rangoli feels for that cause so much, maybe she would like to adopt one of those more effective ways.

Nepotism is an ongoing hollow debate. Let’s just give it a rest and try and appreciate the actors and all the good work they are doing.