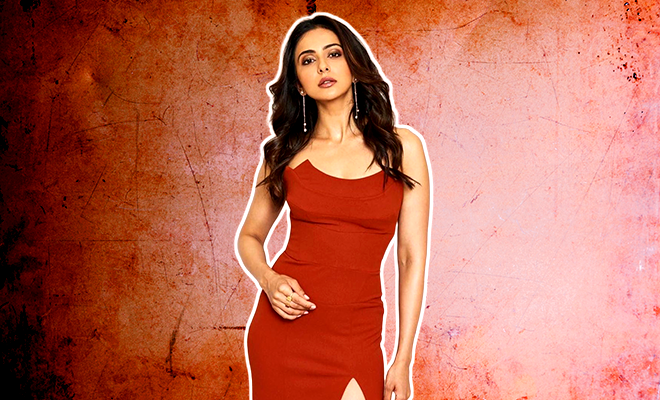 Rakul Preet Said She Was Shamed For Having A ‘Generic’ Face During Her Early Days In The Industry. What Even?

Hailing from the media industry, there are quite a few things that I have found myself get privy to as opposed to when I would be slightly or better yet completely on the outside of this ball game. From sensing the hypocrisy to seeing the stereotypes turn into scalable blockbusters, after you’ve spent enough time in and around this industry, there will come a time when you would feel you’ve seen it all. Which is probably why when the news about Rakul Preet opening about being subjected to body-shaming early on in the industry made rounds, we weren’t as surprised as we were upset upon realising Bollywood never really learns.

Known to have made her name and space in the film industry, be it in south or in Bollywood without having a star parent or a hand over her head, Rakul Preet has always believed in herself and with a talent like that, we now know why. But it had not always been all this pink and rosy for her as the actress recently recalled the kind of struggles and body shaming that she faced when she was starting out in the industry. During an exclusive interview with Pinkvilla, the Marjaavan actress talked about how she had been told that she had what people would call a generic face to be acting in the movies.

Also Read : Rakul Preet Singh Says Content Is Important, Not The Age Of Her Co-Stars. She Does Have A Point!

She said, “Somebody told me ‘You are very good, you are really nice but the problem with you is that you have a generic face’”. Refusing to take any names, the actress continued saying how it felt odd to her but she did not let that get under her skin. She said that it did not matter to her if anyone else liked her or not, as long as she believed in herself and with that attitude, Rakul Preet moved ahead to become the star that she is. What is a generic face even? Like are there face prototypes that we don’t know of?

But the point is even if we assume her face is “generic”, how is it a problem? Cinema ideally should be a representation of a society, even if a fictional version of it. What happens behind the screen, can not always stray so further from reality and that is the concept that Bollywood needs to be made privy to. In an attempt to set ridiculously high and absurd beauty standards, the industry has forgotten that the very audience they cater to is also generic and would rather appreciate a real person they can relate to.

At the end of the day, it needs to be your talent and not your face cut, complexion or the features that should make your place in the film industry and we are glad that actresses like Rakul Preet are keeping their head strong to break past such beauty stereotypes and successfully at that!

Rakul also said, “Everything stems from your belief in yourself. I have always believed that. You can’t expect everyone to like me. It’s okay if someone doesn’t like me, but I have to love myself. When you love yourself, when you accept yourself, half of the battle is won,” and to that we whole-heartedly agree.

The actress is currently working on Kamal Hasaan’s upcoming next and was recently seen playing an important role in the movie Marjaavan opposite Siddharth Malhotra.

Also Read : Rakul Preet Replied To People Trolling Her For Smoking In Manmadhudu 2 By Saying Some Very Confusing Things