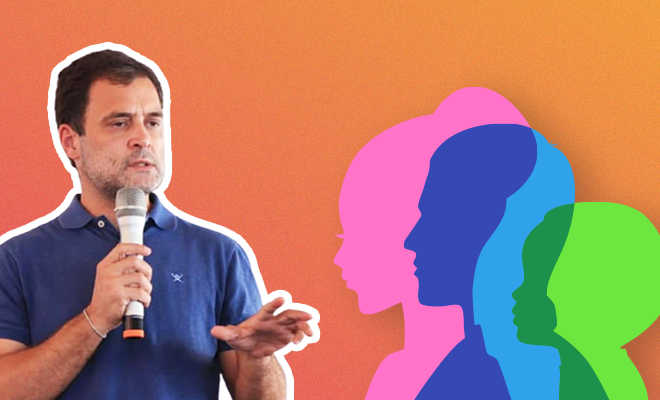 You can talk about feminism and smashing the patriarchy all you want but it’s not going to make even the slightest difference until your actions match your words. This is just the basic logic and it applies to all of us, especially politicians. They are the ones with the power to make big changes to our very dysfunctional system. But alas, they’re too busy shaming rape victims and preaching to women about ‘sanskaar’ to every see just how desperately we need things to change for the better. The politician we are discussing today though, former Congress President Rahul Gandhi, surprised us all with his woke words about women being in control instead of men. But as I said, it’s not about the words but the actions. So I guess the big question is, is he just talking the talk or will be able to walk the walk?

Congress leader Rahul Gandhi is on a two-day visit to poll-bound Puducherry. He held numerous meetings in the Union Territory and interacted with students and fishermen. While giving a speech at the Bharathidasan College for Women, Rahul Gandhi spoke about women needing to stand for themselves, how he wants to smash patriarchy and that women should be the head of the family. Let’s hope, unlike 90% of the politicians, he means what he says.

According to reports, while talking to the students at the Bharathidasan College for Women, Rahul Gandhi spoke about the matriarchal system that used to exist in Kerala. He said the women were in complete control that that’s how it’s supposed to be. He said, “I am a Member of Parliament from Kerala and Kerala used to have a matriarchal system. Do you know that? In Kerala, they told me, I don’t know if it’s true or not but they told me if in certain communities if the woman is tired of the husband, she has to put his shoes outside the house and he has to leave. You’ve heard of this? I think this is a good system.”

"I think women should have power in the family," Congress leader #RahulGandhihttps://t.co/ew1IkMuwHo

It is a good system but sadly we are nowhere close to women having control of the household. We’re so tightly gripped by the patriarchy that most people just disregard women. However, Rahul Gandhi moved on to talk about something that I completely agree with. He said that if a woman was given power in the family and she controlled the finances, everyone would be in a better position. Women always think long-term and we cover all our bases.

He said, “I think women should have power in the family. My experience with work I did in Uttar Pradesh is if a woman controls the finances of a family, her vision for the family is much longer-term. She plans much more effectively for the family than a man. So I’m all for empowering women in the family.” Rahul Gandhi added further that men also have a role but personally, he is “totally against patriarchy”.

Moving on, a student asked him how women can counter patriarchy. Rahul Gandhi replied to her by saying “By standing up for yourself”. He also added, “If somebody is harassing you, if somebody is not giving you what is your due, you have to face them and challenge them.”

Ah, wise words that very uncommon amongst Indian politicians. We like the direction he is taking and it’s refreshing to hear a politician take a non-misogynistic stance but our country needs politicians that can do more than talk about smashing the patriarchy. We need people in our government who are ready to do the grunt work to ensure women get respect, are safe and aren’t oppressed anymore. Do you think Rahul Gandhi is the man for that job?