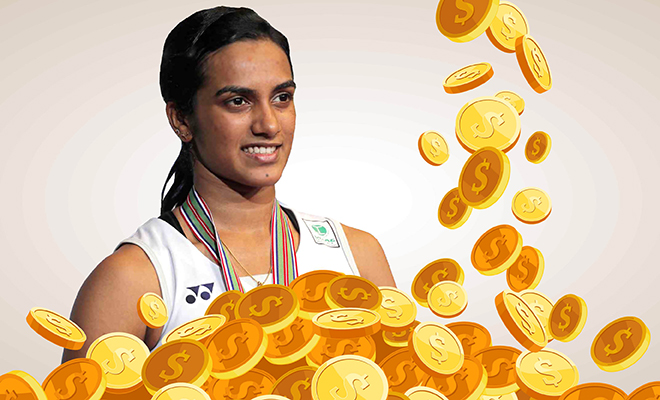 PV Sindhu Is The Only Indian On Forbes’ List Of Highest Paid Female Athletes!

Tennis is where the money is at. And most of the top paid female athletes around the world are attached to that sport. Closer home, our badminton star PV Sindhu is the only Indian female athlete that has made it to the list of the highest paid sports people. The ace shuttler came in seventh on the list of top grossing female sports players in an annual list published by Forbes.

PV Sindhu earns USD 8.5 million each year. This works out to approximately 60 crores. Sindhu is the only Indian player, and one of only two people on the list who don’t play tennis. To know how we value our players, it may be worth noting that an average Salman Khan movie rakes in 100 crores in the blink of an eye.

Serena Williams continues to occupy the top spot, but not entirely due to her tennis earnings. A hefty endorsement deal at USD 18.1 million sealed her position as a top earner, according to Forbes.

I figure if I am ever going to pursue a sport (what? I might!), then tennis is the way to go. Now, only if I could stop eating fries and actually move.