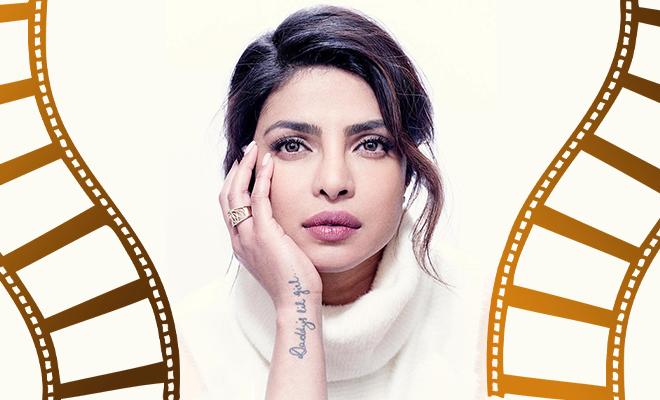 Yes, we know you saw it because every one is talking about it. We’ve been offered a sneak peek into The Sky Is Pink and obviously we are excited. Our desi girl comes to Bollywood after a while and we have missed her. Priyanka Chopra’s last Bollywood film was Gangaajal in 2016 and since then PeeCee hasn’t starred in any Bollywood film.

Also Read: Priyanka Chopra’s Look From The Sky Is Pink Just Got Leaked, And We Think She Looks Incredible!

The Sky Is Pink is a love story of a couple Aditi and Niren Chaudhary spanning 25 years and told through the lens of their spunky teenage daughter Aisha Chaudhary, who is diagnosed with a terminal illness. And looks like with the film, Priyanka Chopra will be doing the dual role of a producer and an actor! Priyanka Chopra has not left any stone unturned and has done it all in her career. From winning the Miss World 2000 title to being awarded with multiple prestigious awards including the Padma Shri, Priyanka Chopra has had a journey to look at for inspiration. The actor doesn’t believe in sticking to the tried and tested, so she’s taking on the mantle of producer as well with this one.

“So happy and proud to announce that The Sky Is Pink is the only film from Asia to have an official selection at The 44th Toronto Film Festival 2019 at the Gala! I can’t wait to be back this year in the dual role of actor and producer,” Priyanka wrote. The Sky is Pink also stars Farhan Akhtar and Zaira Wasim in key roles! The Shonali Bose directorial, The Sky Is Pink will have its world premiere at the prestigious festival in Toronto on September 13. Priyanka added, “I hope to see many of you at the world premiere on September 13 in Toronto. Thank you for your continued love and support! Releasing in cinemas October 11. Here we go.”

Priyanka Chopra is currently having the time of her life with hubby Nick Jonas in Miami. The two are busy painting the town red and are totally #couplegoals. Priyanka Chopra will also be joining Nick Jonas and the Jonas Brothers on the ‘Happiness Begins” tour from August to February 22, 2019 in the US.

Battle Of The Bohos: Sonakshi Sinha And Parineeti Chopra Wear The Same Outfit But, We Have A Fave!