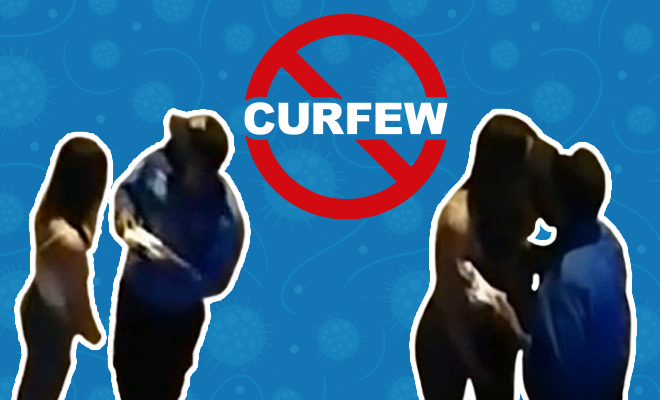 Police Officer Caught On Camera Kissing A Woman Who Broke COVID Curfew Instead Of Fining Her!

Making a lame excuse, fake crying, arguing till you annoy them, even flirting with them so they leave you off the hook, are all some of the ways that people have tried to get their way out of getting a parking/speeding ticket. And while they may or may not work, really depending on how lucky your stars are that night, one way that definitely back fired was to trade a fine for a kiss. An under the table arrangement that recently got caught on camera and ended up getting the police officer in charge suspended.

Catching hold of a woman who was supposed to be fined for breaching the Covid curfew, an officer seemed to be doing his job perfectly well up until the woman got down from the car and decided to pay for her actions not in cash, but kind.

In a video that has now been leaked and gone viral, we can see a woman tread very close to a Peruvian police officer, as she tries to woo him into letting her fine be. At first, we can see the officer simply step aside and avoid any mis conduct. But just seconds later, the two lock lips as the woman finally convinced him to let her go in exchange of a kiss.

Police officer who kissed woman he arrested for breaching Covid-19 rules has been suspended https://t.co/f4EAnT4BrY pic.twitter.com/8OLF10gtax

Also Read : Police Constable Amaldar Razia Sayyed Was Recorded On Camera Sweeping The Glass Off The Road After An Accident

What may have seemed like a very tempting offer for the officer turned out to be a pretty bad decision, since the footage circulated on the internet in no time. The officer on duty was almost immediately suspended while an investigation into the matter was initiated. Ibero Rodriguez, the in-charge of citizen security for the district, shared, ” Our mayor Luis Molina has taken the decision to suspend this officer immediately.” He added, “This action by itself is a very serious one and that’s why he’s been suspended.”

The suspension was followed by the pressure from a TV station that obtained the video and demanded action to be taken against the police officer who was willing to trade sexual favours to let a woman out of a Covid fine. Meanwhile the woman was no better either, who had disrespected the Covid regulations by not even getting herself a fine in the first place, but also disregarding social distancing.

Safe to say, the best way to get out of a fine, is by straight up paying it!

Also Read : Jharkhand Police Comes Up With A Stupid Solution For Married Man Torn Between Wife And GF