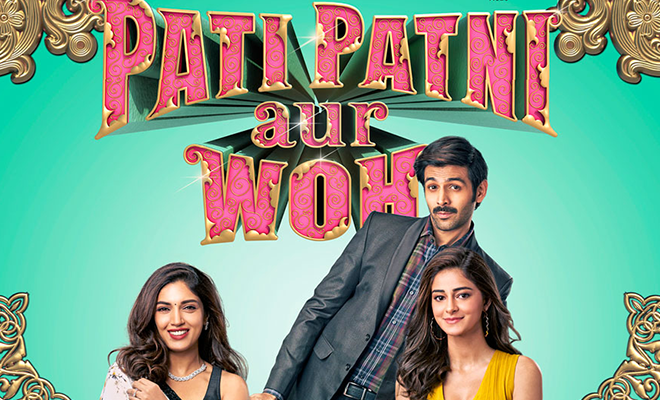 The Trailer Of Pati, Patni Aur Woh Is Out And It Is Stereotypical, Sexist And Painful To Watch

Whenever a movie is in the making and releases its first poster or even from its name, we do get an inkling about what they have in store for us. And usually, our guess isn’t too far from the truth. In a Karan Johar movie for example, we know there is going to be some drama mixed with a bit of clichéd romantic-comedy. Similarly, when the rumours for Mudassar Aziz’s Pati Patni Aur Woh came about, we already knew what was coming our way. Of course, we thought, ‘This is being made in 2019, so it’s probably going to be more contemporary.’ Nope, should have just not expected anything. Because sadly, the trailer was a painful watch and everything we didn’t want to see. It is condescending, sexist and reinforces stereotypes.

Also Read : The Poster For Pati, Patni Aur Woh Is Out And As Usual, The Patni Is In A Saree And The Woh Is Sexy. Stereotypical Much?

The movie that is set to be a remake for the 1978 hit film with the same name, will have actors like Kartik Aaryan, Bhumi Pednekar and Ananya Panday in the lead roles. And while the young and promising star cast is something we’re excited to see working together on screen, we wish it wouldn’t be with a plot as flawed as this one.

The name is a giveaway. This is about a marriage and an affair. But then, the trailer shows that it is also a cliche. Pati, Patni aur Woh continues to unapologetically stereotype women into particular roles, ones that society has already thrusted upon us. The two and a half minute trailer that starts with Kartik Aryan playing the eternal role of a man in an unhappy marriage (oh, poor guy, dragged into a marriage not entirely by choice) with Bhumi Pednekar and the trailer takes us through a predictable tale of an extra marital affair.

Bhumi Pednekar, aka the Patni who is seen to be sporting Indian wear throughout the trailer because how else does one effectively show that this is the wife? To Bhumi’s credit, she does work to play this role with a certain degree of sass. Things get complicated when a third woman, aka the woh or Ananya Panday waltzes into their life as the mistress, who is obviously more fashionably dressed because she is the ‘bad’ woman, okay? From the dialogues about doing someone to the issues to be dealt with to everything in the trailer, this was a blatant objectification of women as someone whose only job is to provide sex, and when not doing that, tease the men by, I don’t know, breathing.

It is condescending, crass and tasteless. But of course, it is packaged well, coming from Kartik Aryan with the boyish charm and Apaarshakti Khurrana who attempts to make such a script sound funny and relatable. It’s not. Especially when you try and make rape jokes while at it. And, don’t get us wrong. We aren’t here to bust any party or dismiss funny. But we are here to call a spade a spade, and going by that, calling this movie a mistake won’t be wrong. At one point, Kartik Aaryan (the director is clearly enthralled by Kartik’s monologue in Pyaar Ka Punchnama) attempts to talk about the frustration about sex within a marriage and it’s so terrible, it will make your ears and eyes bleed.

Forget adding anything of value, it rather takes away from relationships by justifying the white lies cheating partners hide behind during their transgressions. We get it, not every movie can come down with a social message, especially an entertainer that this one is masquerading as. But the least we can expect is not to use the movie as an excuse to keep objectifying women and stereotyping them on the kind of roles based on the kind of clothes they wear. But seems like, it is asking for too much, for this movie is proof that Bollywood alas, never really learns.

Also Read : Sara Ali Khan And Kartik Aaryan Are Fond Of Each Other Even After Breaking Up