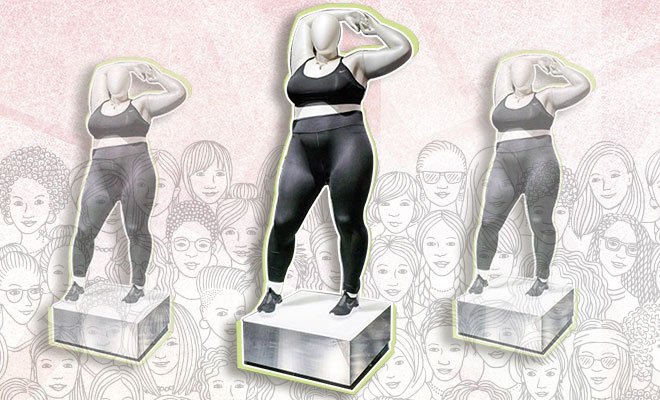 When you think fitness and fitness models, the images conjured up in your head are of skinny humans in possession of washboard abs. People tell us that, Instagram tells us that, magazines tell us that, heck even sports stores with their mannequins tell us that. Big may be beautiful but it certainly isn’t fit. Or that’s what we have been told. And because it’s so mainstream, you believe it. But Nike is trying to change that. The flagship store for Nike in London, has recently taken a step towards inclusivity and change by introducing plus-sized and para-sport mannequins in their store. The range that had made way into their collections back in 2017, has finally gotten a chance to be displayed on mannequins that are breaking all the existing stereotypes there are around beauty.

While we certainly applaud the gesture, could it be perhaps just tokenism? After all, it’s taken a long, long time for bigger bodies to be accepted as even normal. We constantly body shame women, their hips are too big, our body fat disturbing and our eating habits are rubbish. So when this story came out, we were in a bit of conundrum. Yes, this is new and fresh. But will it change anything?

Sarah Hannah, Nike’s general manager and vice President for Women in EMEA says this is a step in the right direction, “To celebrate the diversity and inclusivity of sport, the space will not just celebrate local elite and grassroot athletes through visual content but also show Nike plus-size and para-sport mannequins for the first time on a retail space.”

She further added, “With the incredible momentum in women’s sport right now, the re-designed space is just another demonstration of Nike’s commitment to inspiring and serving the female athlete.”

If you want a vision of the future, imagine a Nike plus size mannequin…..#Orwell1984 https://t.co/ch3b7Bl0o3

Yes, it certainly brings about a dialogue but we aren’t entirely sure it will change anything in reality. Yet, we don’t want to be too cynical. Let’s wait and watch. The move that has won them both – respect and praise is one that we hope travels to other countries too, and bring about the kind of change that we so desire. The world has been conforming to unrealistic beauty standards for far too long, and a move like this is exactly what people need to realise that everyone is relevant and represented in their own beautiful way.

This isn’t the first time Nike has taken its platform to drive change and open important dialogues. Last year, it launched an ad campaign with Serena Williams that left us inspired and motivated as it talked about all kinds of women and just how powerful they are. Way to go Nike, you just did it!