Neha Dhupia Talks About How She Hid Her Pregnancy Because She Was Afraid She Wouldn’t Get Work And About Her Weight Gain. We Love How Candid She Is! 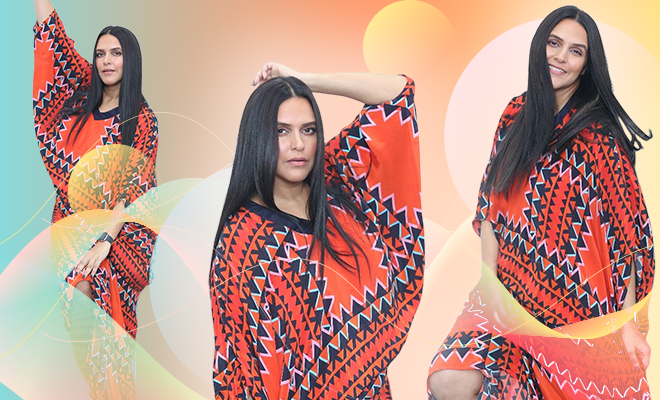 I have realised, the more time I spend with and around people, or even on social media platforms the more I start to hate them. For the simple reason that we as a community, after being given the privilege of anonymity offered by the internet, have become critical about every little thing in other’s lives. Especially the lives of celebrities who are constantly under the scrutiny of the public eye. And one such celebrity, who has recently decided to speak up against the uncalled for and unhealthy criticism of her body is Neha Dhupia. She was candid and opened up about facing body image issues post her pregnancy.

Also Read : Kalki Koechlin Said She Didn’t Feel Any Maternal Instinct At The Start Of Her Pregnancy. Finally, Someone Has Said It Like It Is

Neha Dhupia and husband Angad Bedi, who recently had a beautiful baby girl, Mehr got married in an intimate ceremony earlier this year on May 10. Soon after, the actress delivered her daughter in November and since then, she says the struggle to shed the pregnancy weight gain hasn’t been easy, and the ones making it tougher are the wild spectators, trollers and even media journalists, nitpicking on her body after giving birth.

In an interview, she said, “I did not have insecurity when I was pregnant. I started facing body image issue was after I gave birth. I am not saying that people need to lose weight, being perfect is everyone’s own version. But, what happens mentally is that everything acts up together. I remember I was trolled very badly where a female journalist wrote something on my weight, and I wrote back. It is not fair to trouble a new mum over her body weight,” and we side with her on this, completely.

Child birth is a very complex, wholesome but also a very challenging process. From physical to emotional to biological changes for the mother, it is not just prying but also insensitive to comment on the body and shape of a woman who has just conceived a baby. Mothers are entitled to want to pace their weight loss (if they choose to) in their own way and at their own pace, without being subjected to harsh and unruly comments, from fellow women no less. The last thing we should be expecting is perfection and from mothers who have just gone through a world full of change and pushed a life out their vagina, FFS.

In fact, Neha also shared that the fact that she hid the news of her pregnancy for the first few months was out of fear of losing out on work in the industry, because she said, “I was worried people would stop offering work. It was a good thing my bump wasn’t showing till the sixth month because appearances matter here, and one might be assumed to be unfit for a job.” And as sad as it sounds, that is the kind of reality we live in, when even hard working and willing pregnant women aren’t treated with the kind of respect and equality as they should be. Rather than having an open mind, we push them to such levels of insecurities, they are afraid to be who they are.

Known for hosting the No Filter Neha,  Neha has yet again come through without any filters and raised a  very valid concern of not being so harsh and intrusive on social media, whether they are pregnant or not. It really is time for imbibing the ‘live and let live’ philosophy.

Also Read : Lisa Haydon Talks About Working Out During Her Pregnancy And We Love What She Has To Say!